Analyzing how the Auburn Tigers stack up against Texas A&M’s Fightin’ Texas Aggies in this week's Stat Simulation...

I don't think anyone but Auburn fans thought that the Auburn Tigers football team could make this big of turnaround in one year under Coach Malzahn (a la Texas A&M 2012). Auburn has a potent running offense, three effective tailbacks, and a mobile quarterback. I think everyone saw how Ole Miss' Barry Brunetti tore through our lacking defense and actually scored two (2) passing touchdowns because the Aggie defenders were biting so hard on the play action (Howard Matthews must improve on his ability to be completely duped by this playcall and stick with his receiver as the "last line of defense").

Auburn completely dominates the stat-line in their offense versus our defense - it is no time for "Wrecking Crew" chants in 2013. On the other hand, can anyone stop the Aggie offense or a motivated Johnny Manziel when he needs to come from behind? (Spare me the Alabama jibes, the refs missed two blatant PI calls in that game - one for a pick-six - which turned the tide [pun intended]).

Both teams sport a 4-plus-headed rushing attack. It's going to be Mason - Artis-Payne - Grant - Marshall versus Manziel - Malena - Carson - Williams - Williams. Auburn is 7th in the nation (1st in the SEC) in the ground game and Texas A&M is simply not good at grinding down an opponent's ground game. This might be REALLY painful for us Ags, and we will have to answer every inevitable, long Auburn scoring drive with an efficient and effective drive of our own to win.

I know this looks like a bloodbath in Auburn's favor, so you may be wondering how the - objective - formula has the Aggies on top. Well, the formulas both take into account: Sagarin Ratings, Home Field, Turnover Margin, Past Competition, Scoring Efficiency Rates, and the like. I am fairly confident we will NOT slow down Auburn's ground game much (who has?). I am also confident we will score in the 40+ range for the 10th straight game and keep our unblemished record versus Auburn.

Hey, have you guys ever seen the work they've done over at StatMilk? You can compare any two teams in the nations and pretty match up like-for-like statistics, but you can't take them offense vs defense head-to-head like I do here... It's very interesting stuff though with automated INFOGRAPHICS! 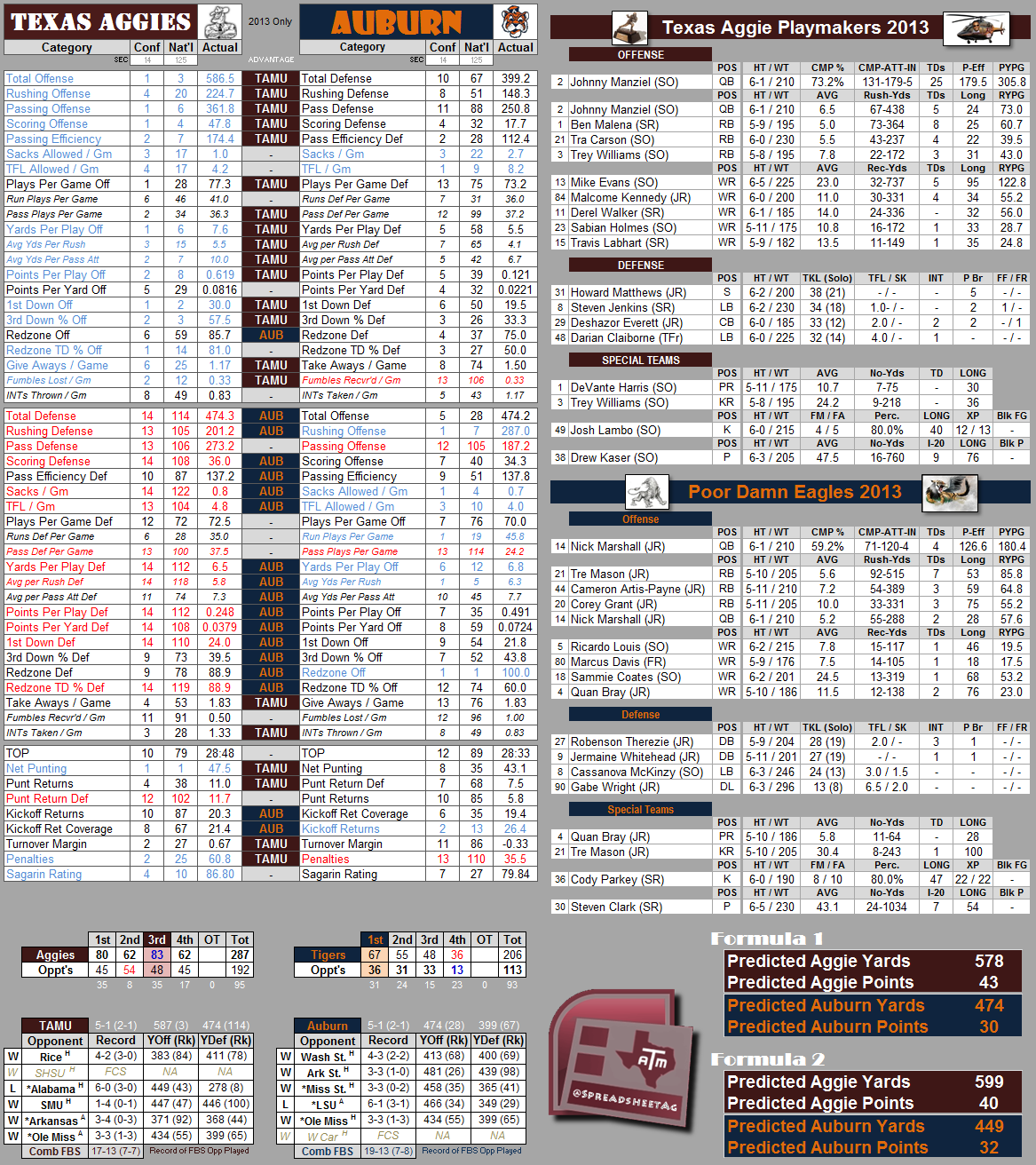 3. Heisman #2 Watch: Johnny has 2,262 total yards in 6 games, landing him 4th in total yards per game (behind some gunslingers Sean Mannion and Derek Carr, and a Johnny Football clone in Brett Smith from Wyoming - seriously: 7 less yards rushing and 19 more yards passing on the season, so far). Marcus Mariota is 6th (358.3 ypg) and Bryce Petty is 8th (347 ypg).

4. Texas A&M scores a touchdown every 13.6 plays while Auburn takes 18.9 plays between touchdowns on average.

7. Auburn has lost 6 fumbles (of 15 forced) - 1 per game; the Aggies have lost 2 fumbles (of 7 forced). Auburn has only forced 3 fumbles all year; A&M 5 forced. Both teams have thrown 5 interceptions.

8. 1,107 of Auburn's rushing yards have come against 3 non-conference foes. Against the 3 conference teams they've faced, they've only managed 615 rushing yards (less than their passing yards - 656) which means Total Offense versus conference opponents is 8th.

9. Versus conference opponents, Texas A&M is 9th in rushing yards allowed, giving up 189.33 per game (feels like a lot more, doesn't it? That's probably because we allow a league-worst 5.68 yards per rush)

Johnny Manziel is 2nd in the Country in Passer Rating in 4th Quarters of games. Check out this stat line - in combined 4th Quarters:

Aggies beat the Tigers 44-31 in a game that many Aggies saw coming with our defensive woes. This game is going to be exactly what we think it is: Scary at times, unbelievable at others, but ultimately the Aggies cruise to the win.

Vanderbilt (3-3, 0-3 Conf) will face the Aggies for the first time... EVER. There has never been a game between these two teams in 120 years possible matchups. Vanderbilt is 0-3 in conference, and is the envy of private schools like Baylor. Well, here's to putting a good ol' Aggie-on-Baylor beat down of the Commodore's next week.