Share All sharing options for: ALL CAPS PREVIEW-OLE MISS

I have an irrational annoyance with Ole Miss. In the grand scheme of things they're inconsequential to us. They havent really done much football wise, and they intentionally hired Houston Nutt as a coach...which to me is a surefire sign that they really have no clue what good football is.

While we're on the subject of Houston Nutt, i think it's important to point out that Ole Miss seems to have an obsession with hiring castoffs from Arkansas. First it was Houston Nutt. Then Hugh Freeze, who wasn't even the coach of the state's flagship institution. He coached at Arkansas State. THEY HAD TO HIRE THE DAMN ARKANSAS STATE COACH. AND THESE SUPPOSED SOUTHERN GENTLEMEN THINK THEY BELONG ON THE SAME FIELD AS US?!?!?!?!

Sorry. Must not go nuts just yet. Another reason I dislike them is because we shat the bed against them last year. 6 damn turnovers. WE GIFTWRAPPED THE DAMN BALL 6 DAMN TIMES AND THOSE PANSY BITCHES STILL COULDN'T BEAT US. THEY MADE ME FEEL FEELINGS THAT I DIDN'T WANT TO FEEL. AND I DISLIKE THEM FOR THOSE FEELINGS. BUT THEN THEY MADE US FEEL THESE FEELINGS SO I DON'T KNOW WHAT TO FEEL BUT I DO FEEL ANGRY AND FEEL LIKE TAKING OUT MY FEELINGS ON OLE MISS.

Our two programs came into that game at relatively similar positions.  But we are not at the same place now, oh no. Ole Miss can't hold our jocks. Ole Miss is inconsequential. OLE MISS MUST BE HUMBLED. THE BEARS MUST BE TRAPPED AND SKINNED.

Song of the day is a shout out to a Mississippi boy. Although the song is by Yung Wun, David Banner (a Mississippian) has a couple of verses. Let's throw it back a few years. Click Play.

AND YES THIS SONG IS LESS ANGRY AND MORE BOUNCY. BECAUSE THIS GAME IS GONNA BE FUN Y'ALL. OH HELL WE'RE GOING TO TEAR IT THE F UP. 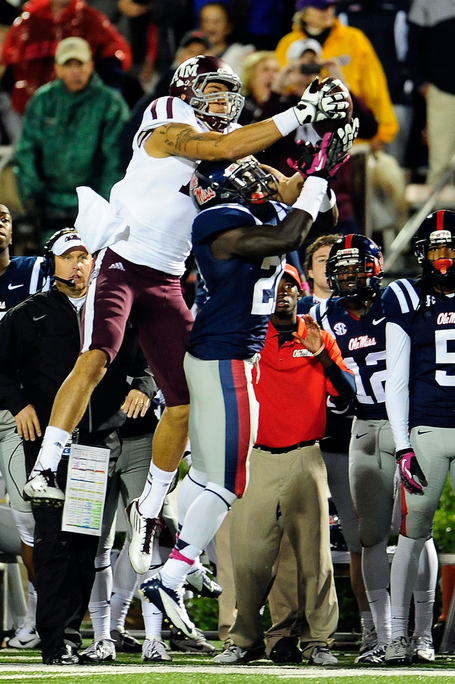 HOW ABOUT WE LOOK AT THAT ONE AGAIN

12) 12TH MAN. I COMMAND YOU TO MAKE THE GROVE YOURS. I HATE OVERALLS, BUT I WANT YOU TO OFFEND THE OLE MISS SENSIBILITIES BY WEARING YOUR GAUDIEST OVERALLS. OFFEND THEM IN EVERYTHING YOU DO. just kidding. be hospitable. BUT NOT TOO HOSPITABLE.

11) 10) Gonna combine these numbers in honor of Sean Porter and Jonathan Stewart. Remember their 3rd down and 4th down stops? If not I suggest you refresh your memory. Just remember that Ole Miss needed half a yard to be in the game. AND THEY COULDN'T GET IT.

9) SIMPLY PUT, YOUR #9 TEXAS A&M AGGIES ARE GOING TO WHIP THE ASS OF THE UNRANKED AND UNCARED ABOUT OLE MISS BLACK BEARS BLACK REBELS BLACK ADMIRAL ACKBARS WHATEVER THE F THEY ARE.

I'M GOING TO SKIP AROUND NOW I HOPE THAT'S OK AND IF IT'S NOT I DON'T CARE.

5) Robert Nkmendiche is an incredibly talented defensive end for Ole Miss. If you dont know his name, learn it now because he is the next Clowney (only with less quit). It was a major coup for ole mi$s to land him...but an ace in the hole was that his brother, Denzel, plays LB for the rebels...and his brother was one of the many people Johnny made look completely ridiculous last year. Take a look at a quote from an article by SBNation's Steven Godfrey.

Among the stunned and inconsolable was Denzel, who operated as a spy on Manziel during some plays and was one of the few defenders quick enough to catch up with the phenom. The elder Nkemdiche had actually tackled Manziel by the foot to prevent a first down conversion in the first quarter. Yet on each of Manziel's explosive plays in the fourth quarter, the quarterback broke contain first from the defensive end, something that was not lost on the younger Nkedmiche, who watched his brother and teammates unravel in devastation.

"It was hard. It was awful. And I think he really saw his brother's pain that night," a former Rebel player said. "I think things changed because he saw Denzel hurting so bad and knew that he could have made a difference out there."

Neat story huh. Good for the brothers to play together BUT LOL AT OLE MISS FOR GETTING A PLAYER BECAUSE OF PITY OUT OF AN INABILITY TO STOP MY QB. MORE LIKE LOLE  MISS AMIRITE?

4) SHARK. HOW DO THESE PICTURES MAKE YOU FEEL OLE MISS FANS?

DOES IT MAKE YOU SAAAAAAAAAAAAAAAD THAT TONEY HURD HAD THE INTERCEPTION TO END THE GAME LAST YEAR?

2) OH YOU KNOW. YOU VERY WELL KNOW. YOU REMEMBER JONATHAN PAUL MANZIEL RIGHT? WELL IF YOU DON'T BELOW ARE A FEW PICTURES TO JOG YOUR MEMORY...AND FYI. HE'S PISSED THAT HE HAD A BAD GAME LAST YEAR. YOU WON'T LIKE HIM WHEN HE'S PISSED. HE TURNS OFF THE DRAKE AND TURNS ON THE MEEK MILL AND/OR CHIEF KEEF.

AND GUESS WHAT? HE'S BETTER THAN HE WAS LAST YEAR MUCH BETTER. AND HE STILL WHIPPED YOUR ASS LAST YEAR. 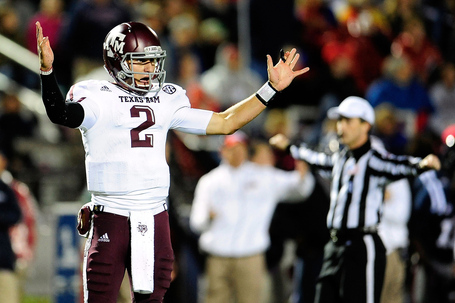 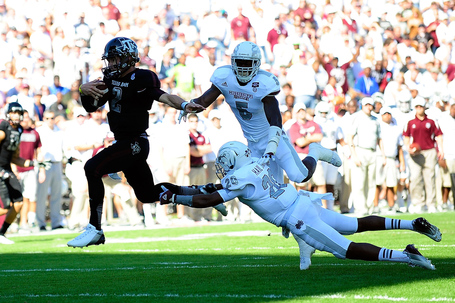 oh wait. that last one is against Miss. State....ehh f it. aren't they the same school anyways?

1) KING BACK. EVERYBODY GOT A PLAN UNTIL THEY GET HIT IN THE MOUTH. AND IF YOU DON'T KNOW WHAT I'M REFERRING TO HERE SHAME ON YOU. CLICK ON THIS VIDEO RIGHT NOW AND WATCH BEN BALLENA FIRE OUR SQUAAAAAAAAAAAAD UP.