Quarterback Bo Wallace declared before Ole Miss' slap fight with Alabama that the Rebels have better receivers than Texas A&M does. Alabama in turn proved our point for us by promptly shutting Ole Miss out in Tuscaloosa. However, the Rebel receivers and, more importantly, their offensive scheme will challenge the A&M defense, especially the corners.

Share All sharing options for: Ole Miss Will Test A&M's Corners on Saturday

"I think we have better receivers than A&M," Wallace said. "They want to talk about Mike Evans being so good, but we have Donte (Moncrief) and I think Laquon (Treadwell) is going to be that way. We have better players on the outside than A&M does."

Whatever, Bo. If you are going to make such a ludicrous statement, you at least have to put some points on the board against Alabama.

While the Ole Miss wide receivers may not be as good as the ones we have here at Texas A&M, they will provide a challenge for the Aggie defense on Saturday especially for our corners De'Vante Harris, Otis Jacobs, and the shark himself Toney Hurd, Jr. For the defense to play well this week, the corners on the outside are really going to have to step up while Deshazor Everett continues to see time at safety until Floyd Raven returns to the field.

However, it is not all about the talent of Moncrief or Treadwell. Coach Freeze's system helps them out a ton. Let's take a look.

One thing that you will see Ole Miss do constantly on Saturday night is check plays at the line of scrimmage. The offense will line up, look at the defensive formation, and then get a call from the sideline to check into a different play that takes advantage of how the defensive is lined up against that particular offensive formation. This is a perfect example against Auburn last weekend. 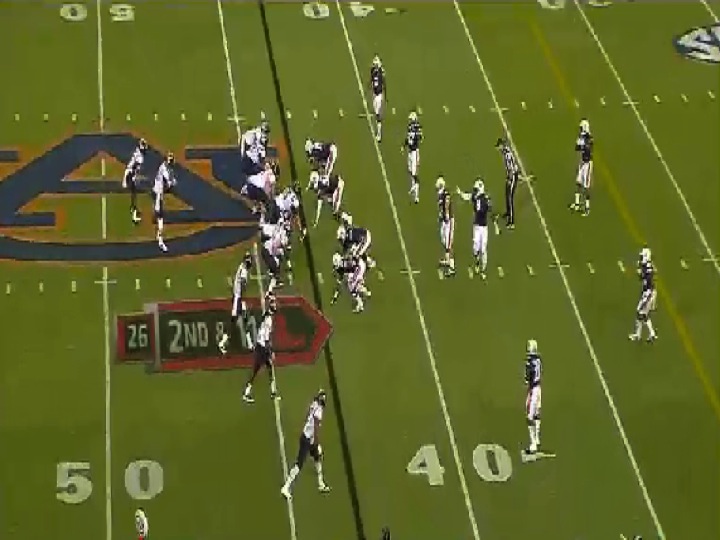 Ole Miss is playing 11 personnel on the field (1 RB, 1 TE, 3 WR) with the receivers lined up in trips to the right or bottom of the image. Look at how Auburn's defense is aligned to this formation. They have a corner playing the receiver closest to the sideline, a safety shaded to the receivers and a linebacker who is walking over to that side as well. Ole Miss recognizes that Auburn's corner is the only player who can match-up against these receivers in the first 5-7 yards past the line of scrimmage. They choose to take advantage of this and check out of the called play. 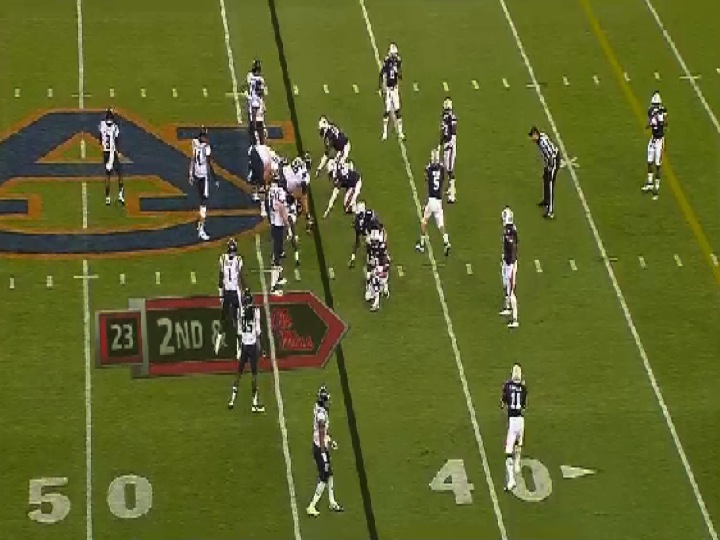 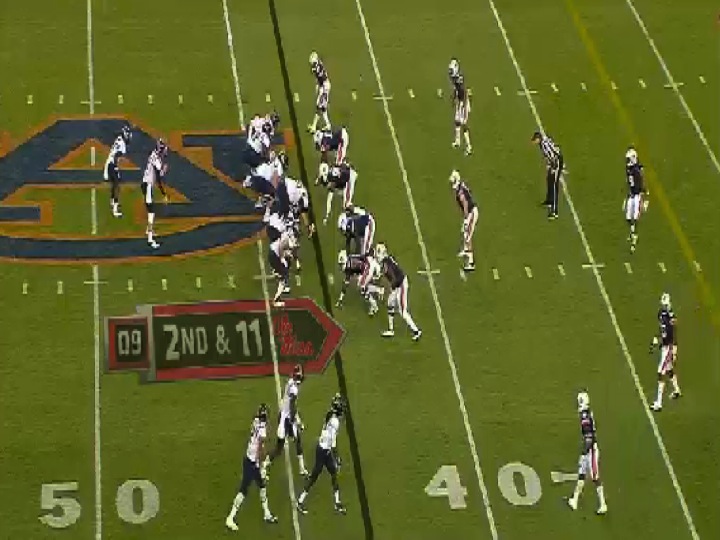 After the check from the sidelines, the receivers have gone from a trips look to bunching together at the numbers. Still, Auburn only has a lone corner within 5 (really 6) yards from the line of scrimmage, and the safety just walks a little more to the sideline but doesn't come closer than 9-10 yards before the snap. The linebacker to that side has given more of an edge-rush look. It should be pretty clear what Ole Miss has checked into here. They are going to run a receiver screen to take advantage of Auburn's poor numbers to the right side of the field. 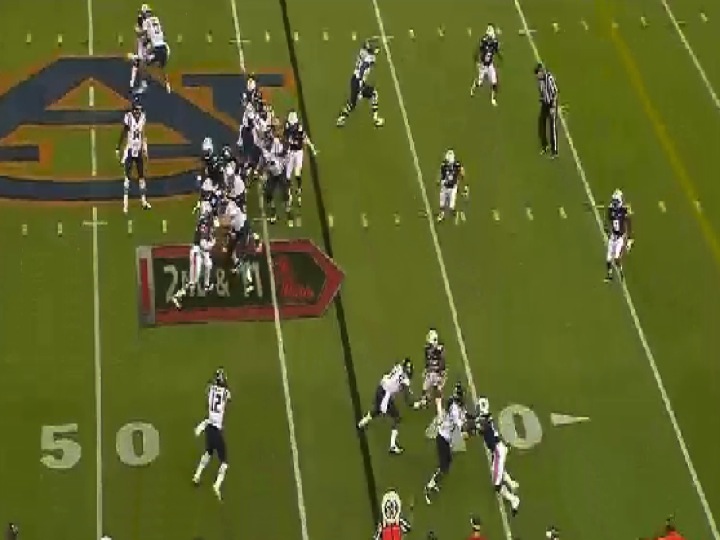 The first two blockers will take on the corner and boundary safety, while Donte Moncrief will pick up an easy 7 or so yards on this 2nd and 11 play.

Ole Miss will check often into these types of receiver screens if they feel like they have the numbers on the outside. That is going to be a problem for the A&M defense whose top priority will probably be to stop the read-option run attack of Ole Miss, just like Auburn was trying to accomplish here. As A&M encounters these plays throughout the night, the outside corners in Harris and Jacobs need to be able to shed their blocks efficiently to help contain some of these plays for minimal yardage. So far this season, both Jacobs and Harris at times have struggled with run support on the edge. It will be critical for them, along with Hurd and Howard Matthews, to make these plays on the outside. This will put Ole Miss behind the chains, leading to longer 3rd down attempts helping the A&M defense get off the field.

As I watched the Auburn game, I quickly realized that this Ole Miss receiving group has their strengths and weaknesses. One of their weaknesses is they aren't really as fast and quick out of their cuts as you might think, and actually they really struggle to get open at times. However their size and length, their biggest strength in my opinion, really makes up for them not being able to get open consistently. Moncrief, Treadwell, and freshman WR/TE Evan Engram (the three names you'll hear the most on Saturday) are all 6'3". That means their top 3 favorite targets each have incredible wingspan. So while they may have a hard time getting open, their wingspan helps them create separation from the defensive back by pushing off while the ball is in the air (don't expect any offensive pass interference calls in Oxford on Saturday). Their length also increases their dynamic range at which they can catch the ball. Bo Wallace is not an accurate QB, but that actually helps them at times because the receivers are truly the only ones who can catch his errant passes.

Another way Ole Miss helps their receivers get open, especially on short yardage plays, is by designing route combinations that cause natural "picks" or "rubs". 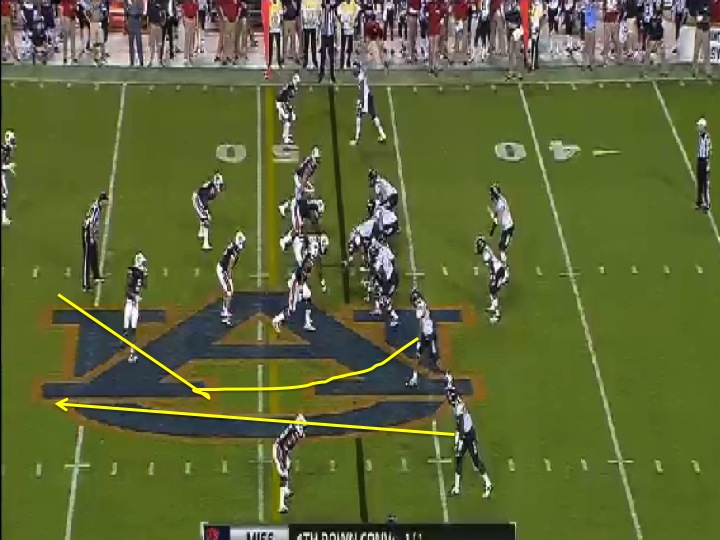 This is a 4th down and 2 play from Saturday night. On this play, Treadwell (bottom of the screen -- there is actually another receiver not shown who is lined up on the numbers to the left) on this play will run a "go" route straight up the field against the nickel corner. Engram, the inside receiver on this play, will be running a medium cross or dig route towards the middle of the field. Note that the free safety is responsible for Engram and is not shown in the above image. What is interesting is that as the play develops, he (Engram) actually runs more toward the hashes alongside of Treadwell before cutting back into the middle of the field instead of running straight forward or more toward the middle of the field. 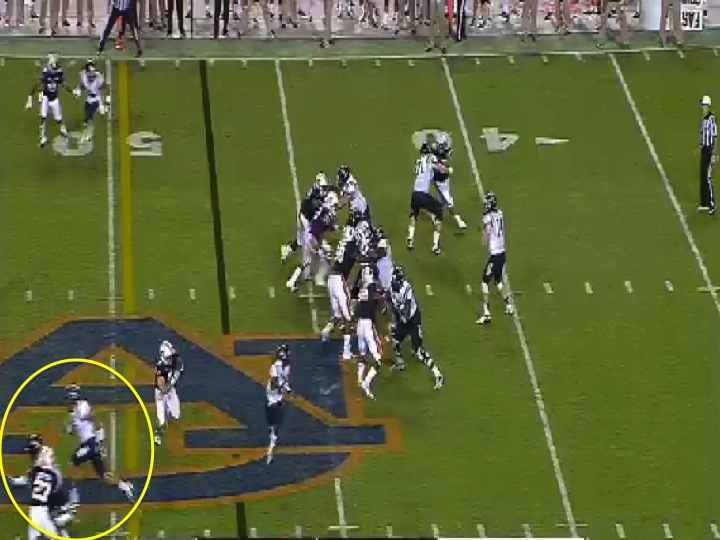 You can see how close both receivers are after the snap here. Why does he do this? I believe it is to confuse the coverage on this play, especially the nickel corner #27 for Auburn. Two receivers in the same area on the field is something you never want as an offense. However, it can be used to your advantage at times as one receiver can "accidentally" bump into a defender to create a pick causing the other receiver to get open. Ole Miss will do this at times during these short yardage situations when they are bunched together in trips or on crossing routes over the middle. (When I watched this play live on Saturday night, this is what I thought happened, but didn't turn out that way after review. Thanks incredibly zoomed in ESPN cameras!)

Another advantage is defenders will get confused on who to cover in these situations, especially if these players separate, which I believe happens here. #27 for Auburn knows he has a safety covering on his side of the field. He has to be cautious in case Engram or Treadwell decides to run an out route towards the sideline, as the safety would not be able to cover that route. Instead Engram will break back toward the middle of the field taking that safety with him, leaving Treadwell running that go route this whole time up the field. 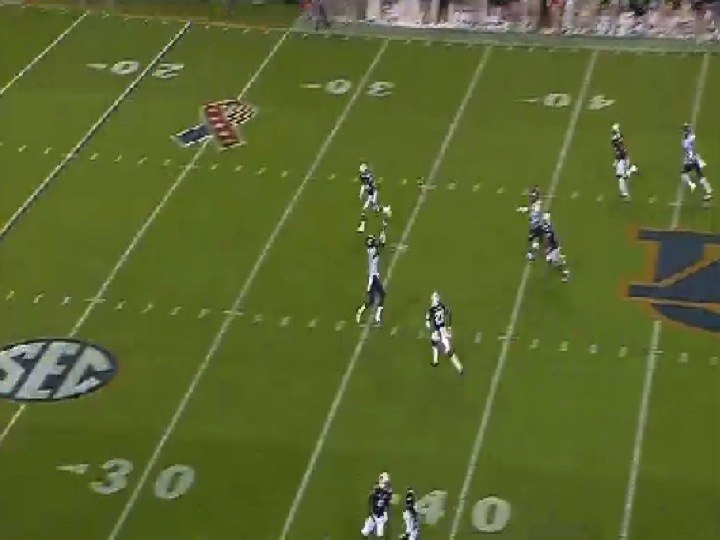 Which is exactly where Wallace goes with the football, and #27 is out of position. The indecisiveness of the nickel corner will cost him on this play. Also notice where Treadwill has to catch this football. Great throw, Bo.

(Note: I'm not 100% sure what coverage Auburn was in here. At first I thought it was Cover 1, but with how the nickel corner played this it might be a Cover 3 look) 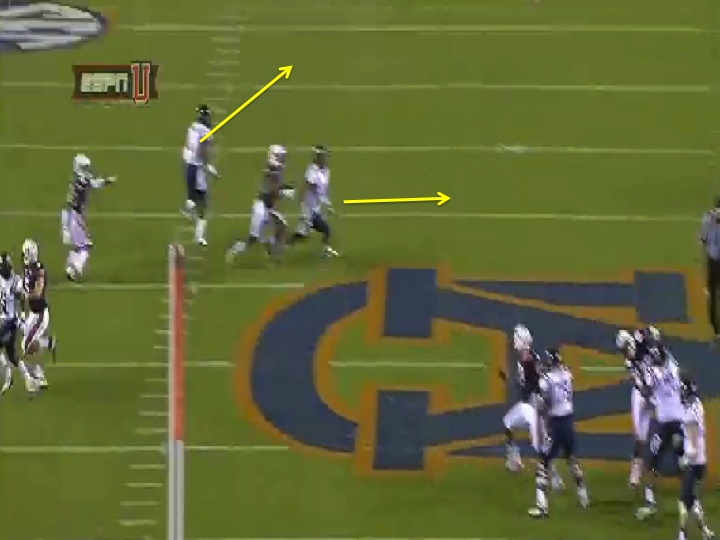 Here is a view from the endzone. You can see Engram breaking inside, Treadwell going up the field and #27 nowhere close to making a play.

These are the types of things that Ole Miss will scheme for on Saturday night. While the Ole Miss receivers may struggle on their own in coverage, the screen passes and play design will require our corners to be on top of their game to limit the big play potential of the Ole Miss offense.