See how Alabama’s Crimson Tide stacks up against Notre Dame’s Fightin’ Irish in this week's Foundation of Facts...

Share All sharing options for: 2012 Foundation of Facts – MNC: Alabama vs Notre Dame

The write up is going to be short this week because I decided to do this at the last second.

Forget everything you think you know about this game. The stats point to a gritty, tough, close, low scoring game. My gut tells me that Bama rolls by 2+ touchdowns.

1. Notre Dame’s defense has a slight edge versus Alabama’s offense, but I think Alabama will get some yards through the air and on the ground where they rank 4th and 6th (respectfully) in average yardage per attempt. The thing is Notre Dame just doesn’t give up touchdowns in the red zone; they are the prototypical bend but don’t break defense. They may not be elite in turnover ratio, or forcing 4th downs, but they will keep Alabama out of the end zone often.

2. On the other hand, Alabama should quite easily shut down this Notre Dame offense. ND is balanced but they just don’t score efficiently or often enough to overcome this Alabama defense. 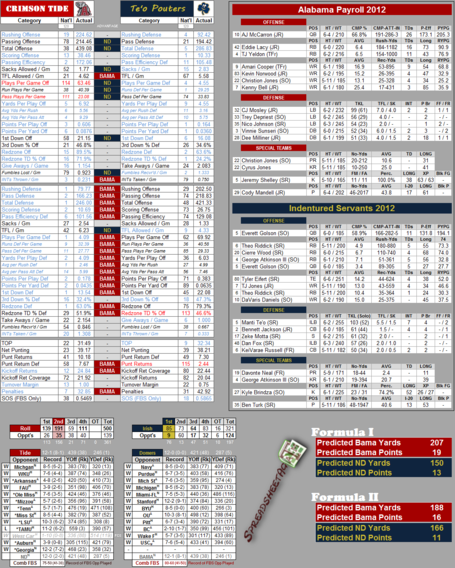 1. Notre Dame has allowed a whopping 9 points in the 1st quarter of all games combined. N-I-N-E points. (A&M would score 21 on them in the first 10 minutes and then just wait for the final whistle…)

2. Who’s carrying the ball? Notre Dame has four (4) runners with 4+ touchdowns, but no runners with more than five (5) TDs. Though, their top 3 true running backs all average 4.9+ per carry, or better.

3. Can Everett Golson pass the ball? He has a 58.9% completion percentage and throws for 194.1 per game, but only has 11 TDs versus 5 interceptions.

4. Alabama’s SEC defense brings some of the biggest, fastest linebackers out there, who should be able to cover ND TE Tyler Eifert.

5. Manti Te’o: He didn’t win the Heisman, but he is a great defensive player. He doesn’t cause much disruption in the backfield himself, but he does cover the middle of the field and woe to AJ McCarron if he tries to go down the middle.

6. I hope Notre Dame’s Bennett Jackson (CB), Zeke Motta (S), and KeiVarae (CB, Fr) are ready for Amari Cooper – the freshman WR for Alabama has really established himself as an elite SEC receiver in just his first year catching balls for the Tide.

7. Alabama may get stuffed in the red zone, but they won’t walk away with zero points – their kicker, Jeremy Shelley, is 100% on 11 field goals total. Saban may not trust him longer than 40 yards, but he is money from anything closer.

Gut Feeling: Alabama smothers Notre Dame and goes on to win 27-10 in a game that is only close for the first quarter.