See how the OU Sooners stack up against Texas A&M’s Fightin’ Texas Aggies in this week's Foundation of Facts...

The last time you and I met, was right before the shellacking that the Aggies put upon the Missouri Tigers. A lot has transpired since then: 1) Johnny Football wins the Heisman, 2) Luke Joeckel wins the Outland, 3) America went over the fiscal cliff but held onto the roots of a cliff-hanging tree near the top, 4) Florida went over the Driskel cliff and lost to Louisville, 5) Etcetera, Etcetera... This week we will look at how the potent Oklahoma team (#11 BCS) stacks up against the Texas Aggies (#9 BCS).

Oklahoma has survived the Big 12 offenses and only dropped one (1) conference game – one they probably should have won, in retrospect - to KSU. However, in two (2) of the last three (3) games of the season OU got itself into shootouts versus in-state rival OSU (51-48 W/OT) and West Virginia’s Mountaineers (50-49 W). Texas A&M is 1-2 versus teams that had 2 losses or less prior to the bowl games - #2 Alabama, #3 Florida, #8 LSU; OU is 0-2 losing to #5 K-State and #1 Notre Dame. Pay special attention to the quarter by quarter matchups of these two teams… they are eerily similar results.

Some other statistics to pay attention to down below:

1. Texas A&M’s Offense is #1 in the SEC in rushing offense, passing offense, total offense, scoring offense, plays per game, average per rush, 1st downs, 3rd down conversions, and TD scoring in the redzone. 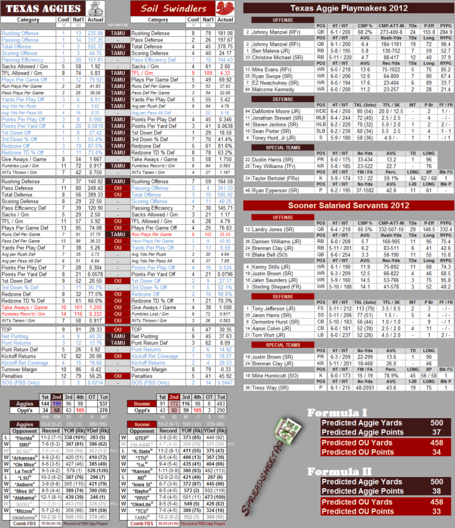 2. A&M, either through Johnny’s scrambling ability or on the back of Malena and Michael, should be able to run all over Oklahoma’s porous run defense (94th in Avg Per Rush)

3. With OU’s DT rotation maligned and A&M’s superior offensive line talent, they will have a hard time getting to Johnny Manziel – who has proven that he will chuck it down the field if given time in the pocket.

4. Landry Jones has passed the ball 107 more times than JFF, but only has 5 more TDs.

5. Not listed in the Top-3 runners for A&M above is Trey Williams, a stellar true freshman who has four (4) TDs and average 5.7 per carry.

6. Even though no starting cornerbacks or safeties are listed in the Top-5 of A&M’s defense, I expect those guys to get a lot of work this game and if they can hold on will be the star unit of the game.

7. I actually feel sorry for Corey Nelson and Tom Wort in having to stop fellow Texan Johnny Manziel from scrambling around and running all over the OU defense.

Gut Feeling: Aggies beat OU 41-34 in a wild one that sees lots of scoring early, few mistakes, and tired defenses at the end of the game.

LOOK AHEAD: Could this be the start of Manziel’s 2013 Heisman campaign? I say yes! 2013 National Signing day is February 6th. The Aggie Maroon and White game will probably wind up being around the 20th of April if they stick to the same general time-frames they did last year.