THE TAILGATE: A graphical preview of Aggies vs. Sooners in the Cotton Bowl

Hey, Aggies. Remember when we were members of that conference with Oklahoma? It feels like so long ago. We're different people now, moving in different directions. But that's OK, Ags. It's OK because while we may have a familiar foe in this Cotton Bowl, it's a familiar foe to whom we owe a giant slice of FU pie. With that in mind, grab yourself a beer out of the cooler we brought (step away from the Okie swill), kick up your feet and put your 12th man towel in your lap for this season ending edition of The Tailgate.

Share All sharing options for: THE TAILGATE: A graphical preview of Aggies vs. Sooners in the Cotton Bowl 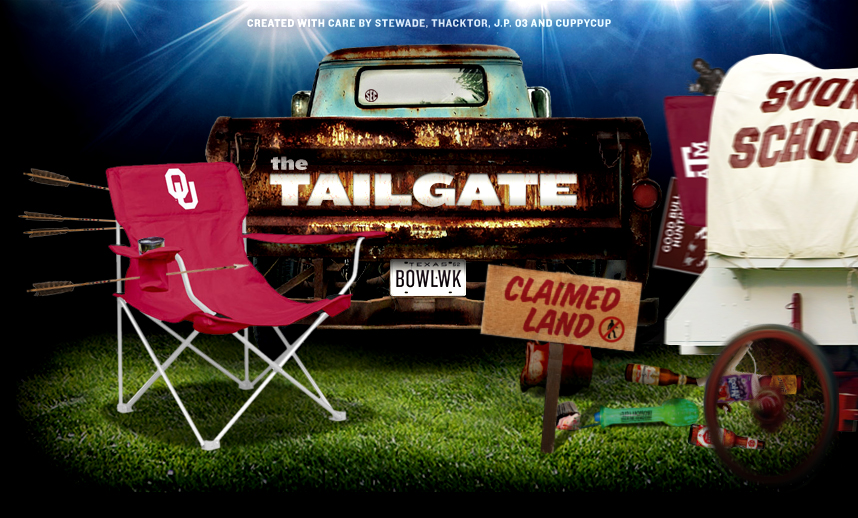 I've been looking forward to this one. The preview where I get to drop the uninformed bit and just talk about two teams going at it like they have for years. Sooners, we missed you. I see everything is going alright in the old neighborhood. That's nice. Yeah, we heard that two new people moved in. No, we like the new neighborhood just fine. No, it's only dangerous if you act like you're a tourist.

Sumlin and Stoops meet on the 50 during warmups to have a quick chat. Stoops says, "I taught you everything you know, Kev. You know that, right? That, and I flat own the Aggies."

Sumlin laughs in a way that only Sumlin can. You can tell that he's tickled by this statement. Tickled almost to the point of hilarity, but he's cool about it. The volume of his laugh never exceeds a soft, low hum. Gently, he covers his mouth with his right hand. Then, his eyes harden and a certain fire can be seen behind his pupils. With his once polite right hand, he swiftly backhands Stoops across the face but then quickly catches the OU coach's head with the same magnificent mitt. The speed of this maneuver cloaked it in the guise of a familiar bro-hug.

Sumlin draws Stoops in close, completing the illusion and says, "Bob, that was the best shot you had at stopping me all day. Take the ball first, we don't even need the coin toss."

Like Sumlin's backhand, the Aggies' victory is swift, merciless and devastating to the Sooner team. Spencer Nealy and Damontre Moore will never have to worry about rent or a house payment again as they will live rent free in Landry Jones' head for eternity. Johnny Manziel lives up to the Heisman he received weeks earlier and torches the Sooners for a 300/150 effort.

After the beating, Kliff Kingsbury hears a knock at the door. Wondering who could come calling so late in Lubbock, he answers it to find a very large man dressed in all black and donning sunglasses. "You Kingsbury?" he says.

"Yes, sir. And you are?" replies KK, confused and a little sleepy.

"SUMLIN'S RETRIBUTION!" the unidentified man exclaims as he issues an ass-slap that could be heard all the way back in Dallas. Upon hearing it, Sumlin smiles and drifts off to a restful slumber.

Screw OU. We have a ton of seniors (and juniors) leaving, and they've earned this spot. Swope will leave as the most productive wide receiver in A&M history. Without him, we don't win in Tuscaloosa. Without him, announcers have no reason to bring up Wes Welker every. single. game.

I was convinced that C-Mike would go out as a Top 3 RB to ever play in an A&M uniform, and while he had a great career, injuries (and tweeting and punching) limited what could have been an all-timer. I'll always remember the B-Button and the Bully.

What more can you say about this guy? Probably a lot. But he's my favorite player on the team, and I can't imagine the locker room and press conferences will be the same without him.

Just a solid, solid guy that I would never ever EVER want to run across when he's angry. Also is easily the best Tweeter on the team. Tweets like a man possessed.

I'd estimate that Pat has started about 84 games in a row for us, and has basically made us forget all about the center spot. Which is sort of exactly what you want from your center.

EZ was either really really ridiculously fun to watch, or pretty much nonexistent, at least statistically. He was either catching multiple touchdowns, or 2 balls for 24 yards. Seriously, just look at his 2009 and 2012 seasons. And after his breakout freshman year, I thought he'd have a chance to be one of the best ever, but 2,100 yards and 18 TDs is a really solid career.

I always really enjoyed Stew's interviews, and I also really hated reading articles during his sophomore and junior year that he just "needs the light to turn on." THE LIGHT IS ON. HE TURNED IT ON, OK?

If anyone was gone after this year, it was Damonster. We all know the national media didn't appreciate the year this guy had, but I'm not sure Aggies really did either. After Von Miller made love to the A&M fan base like no player had in years, Moore had a high bar to reach, and came really really close. But it didn't really seem like he did, did it? 80 tackles, 20 TFL, 12.5 sacks, 2 blocked kicks, as an END? That's insane. If he had connected with the fans as well as Von did, we'd be calling him an all-timer. We still should be. We're talking about a DE who was briefly in the Heisman conversation. Good luck on Sundays, big fella.

On top of all the seniors who will be playing their final game for the Maroon and White on Friday, we've also been informed that at least one junior is leaving the team as well. Defensive end and quarterback killer Damontre Moore announced he's leaving for the NFL, which was awesome news for him until the first round of mock drafts informed him he'd be going to the Lions. Luke Joeckel's departure probably won't be far behind. I'm banking on Jake Matthews staying only because he doesn't want to see our school melt down if all 3 guys leave at the same time. Right, Jake?!?! I would ask more forcefully except Matthews is 6'5," 305, and I'm, well, not. Anyway, having a pair of top-10 draft picks never hurt anyone, so as much as those guys will be missed, we all wish them nothing but the best at the next level. Okay, we actually wish that they'd all 3 come back and win a national championship (hint, hint), but if not, let's make sure to send them off in style.

To this day, I still contend that one of the most traumatic moments of my entire childhood was the day I turned on my favorite show, The Dukes of Hazzard, only to learn that Bo and Luke had been mysteriously replaced by their cousins Coy and Vance. Roscoe and Enos seemed to accept them with open arms, so why couldn't I? Because they just weren't as good as the originals, that's why. At the completely opposite end of that replacement spectrum, we now find ourselves with a new offensive coordinator, one who doesn't seem to carry himself with the same irresistable-to-the-ladies swagger as our old one who, just like Bo and Luke with their NASCAR wanderlust, recently departed to chase his lifelong dream. Can the Aggie offense survive without Kliff and his perpetual 5 o'clock shadow? In a word, yes. Once you get over the fact that the glasses in his official portrait kinda make him look like Aggie archnemesis Mark May, you'll soon realize that Clarence McKinney is more than worthy to take the reins on Friday night. And maybe even for all of next season, too.

The Final Nail in the Coffin

Here's an angle that I hope interests the portion of our fan base who just can't seem to get excited about playing an old Big XII foe: recruiting. We've already seen the effect A&M's meteoric rise is having on our biggest recruiting rival, unless you want to chalk up Mack Brown's sudden decisions to recruit JUCOs, not yank scholarship offers from commits who take visits elsewhere (*cough* A'Shawn Robinson *cough*), and hire Willie Lyles' good buddy Larry Porter to random coincidence. So with Hoza Scott summing things up nicely by telling everyone Texas "seems like they're falling apart," the biggest threat left between Kevin Sumlin and any recruit in Texas he wants is OU. A firm beating by the Aggies on Friday could set them back at the worst possible time, and not even Big Red Motorsports, unlimited free gas, or that unbearably annoying "Hello!" commercial could bail them out.

Ah yes, the elephant in the room. Popular opinion among the more paranoid segments of our fan base seems to indicate that after a whirlwind tour through New York, LA, Houston, Dallas, and Megan Fox (family-friendly Rule #1 compliance here), Johnny Hollywood is gonna be too rusty to lead the Aggies to victory on Friday night. In fact, the whole team will play like Mox and the boys after their notorious all-nighter, complete with OU players lighting them up in slow motion with Thunderstruck blaring over the loudspeakers. Never mind the fact that other than against SMU, JFF has led the boys down the field for a touchdown on A&M's opening drive in EVERY SINGLE GAME this season. Yes, even in the Florida game with last summer's arrest hanging over his head. After Johnny Halloween, you ask? The Aggies rolled into Davis Wade Stadium and Manziel accounted for over 400 yards of offense against then-number 15 Mississippi State. But please, all you message board cliff jumpers, please keep finding something to worry about. In fact, how can you even enjoy a feature like The Tailgate with its non-stop sunshine-pumping and over-the-top Aggie optimism? Thacktor, Stewade and I asked ourselves this very question, then decided to re-write this week's entire column from your point of view. Yes, the entire column. If you click on no other links today, please click on this one. Enjoy, Colin! 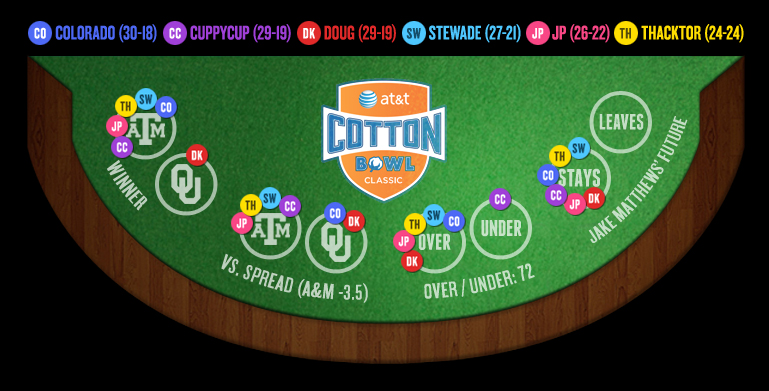 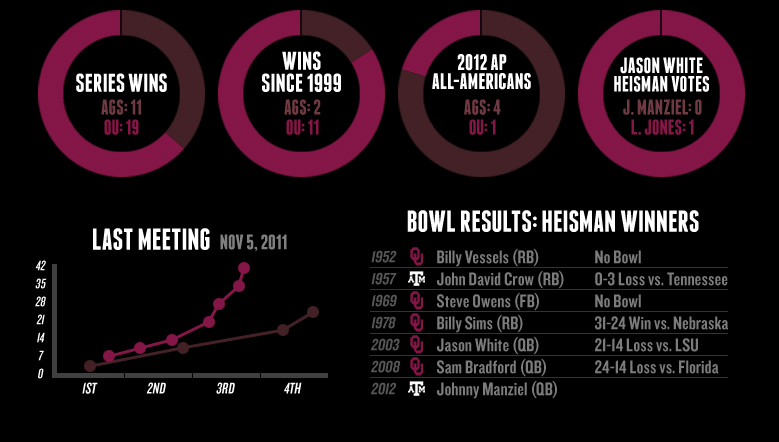 In a fan fiction twist, Johnny suits up as Daniel LaRusso and sweeps all legs.

You've tempted the edge of that cliff for too long now. It was only a matter of time.

Stay calm and use your head.

TSA lady at airport just asked me if I was "one of those u know buggy people" (meaning Amish).. Now I know I have a respectful beard!!

I believe the Aggies and Sooners will produce more total offense than any of the Bowl Games. #CottonBowl #CoachesCabana cc: @jackiesherrill