The other day we focused on what the Texas A&M offense had to key in on to defeat Oklahoma in this Friday's Cotton Bowl Classic. Today, let's flip it to the other side of the ball and see what kind of challenges await the Aggie defense from Landry Jones and the Oklahoma Sooners.

Many are predicting a shootout this Friday night in the AT&T Cotton Bowl Classic with Johnny Manziel and Landry Jones dueling it out in Cowboys Stadium. The other day, we talked about how the Aggies should actually focus more on the ground game against a weaker Sooner front seven and with interim offensive coordinator Clarence McKinney calling the plays.

On the other side of the field, it will be up to the Aggie defense led by defensive coordinator Mark Synder to stop the Oklahoma passing attack. One of the weaknesses of this Aggie defense so far this season has been defending a spread passing game. However, the defensive secondary has improved over the second half of the season as corners Dustin Harris and Deshazor Everett have become reliable defenders and Howard Matthews has emerged as a second safety to play alongside Steven Terrell. The Aggies still face a veteran quarterback and a Sooner passing attack that, while not as dynamic as in seasons past, has created opportunities for big plays with misdirections and sleight of hand. Let's take a look. 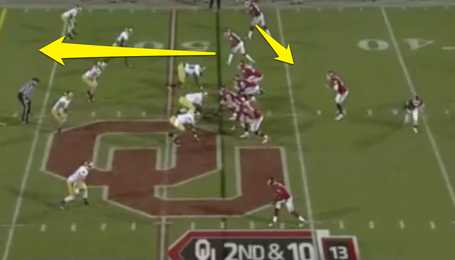 Against Notre Dame in their biggest game of the season, Oklahoma lined up in a strong three wide receiver set with Jones in a pistol look you will see the Sooners use often. Right before the snap of the ball, the running back will motion out from behind the quarterback, giving Jones a passing option in the flat as a check down, something else you will see commonly from the Sooners. However, on this 2nd and 10 play, the Sooners will run a simple WR screen to pick up some yardage to set up a manageable 3rd down opportunity. At least so it seems.

Notice the screen appears to be set up. The outside receiver highlighted by the yellow box is running toward the middle of the field and his offensive linemen are out in front ready to set up their blocks. But notice slot receiver Jalen Saunders on this play. Instead of blocking, he has entered into a passing route and has gotten behind the Notre Dame linebackers in coverage (in yellow and red boxes to the left of the image, respectively). 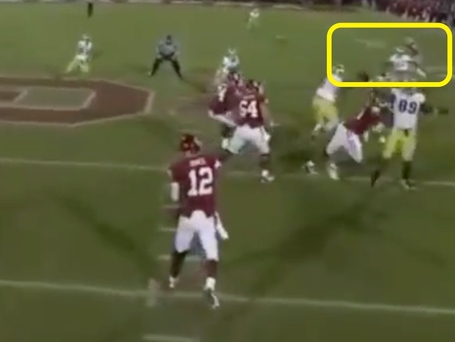 From this angle behind the quarterback, you can see the blockers setting up the underneath screen, but also Saunders finding a spot in the zone right behind the linebackers. This is great anticipation by Landry Jones as the ball is already in the air before Saunders is in the middle of the window between the zone. 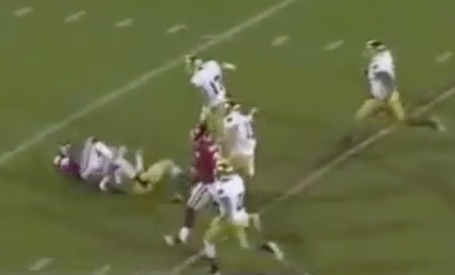 This play will go for a huge gain down to the Sooner 15 yard line, one of Oklahoma's biggest passing plays on the night. 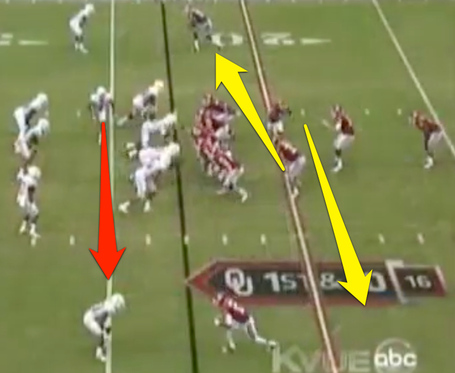 One of the most memorable plays I have of this year's Red River Shootout at the original Cotton Bowl is this pass play at the beginning of the second quarter. Another variation of the Sooner pistol attack is a fullback, #33 Trey Millard, lined up as a lead blocker to the weakside of the formation. The Sooners will also line up in the famed diamond formation at times. On this play pre-snap, slot receiver Jalen Saunders will go in motion across the formation and fake the direct snap fly sweep. That will be the first misdirection playfake on this play and one the Sooners use commonly.

The second fake on this play will be a play action with the running back with Jones rolling out to his right. The fullback Millard will run across the formation with the Jones rollout and to the opposite side of the Saunders motion and play action. 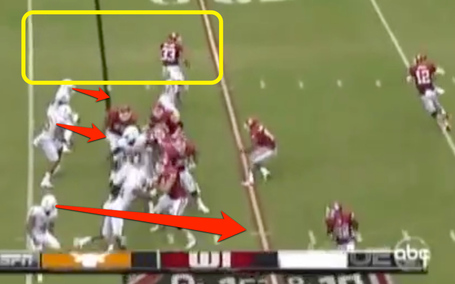 The other two linebackers on this play, both the middle and the outside linebacker towards the top of the image, have reacted to the play action with the running back. Both get sucked up toward the line of scrimmage. That leaves the fullback wide open in the flats on this play with green in front of him. 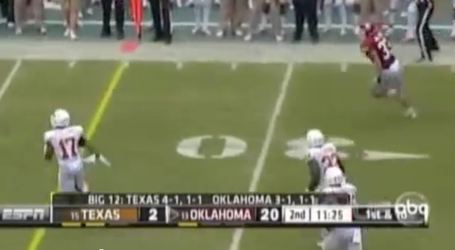 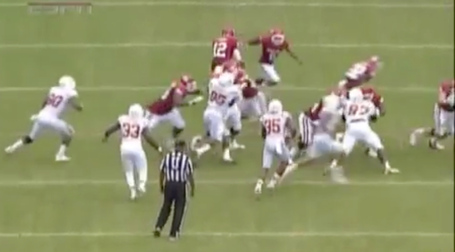 Here is a look at the fakes and blocking from behind the Longhorn defense. Notice all of the defenders are sucked up to the line of scrimmage and to the right by these two fakes in the backfield before the Jones rollout to the opposite side. 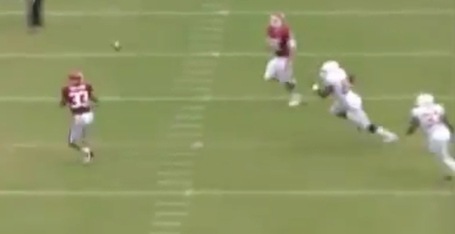 This is as easy as it gets for the Sooner offense. A couple of missed tackles later, and Millard is pushed out of bounds all the way down at the Sooner 5 yard line setting up a touchdown.

These two examples show that some of the Sooners' biggest passing plays of the season weren't down the field throws with receivers beating coverage. Instead, they were these sneaky play fakes and misdirection type of plays that got their skill players wide open. A good, sound defense can cover all of these receiving options making Jones beat the Aggies with his arm instead of just base play design.

For the Aggies, they will have to make sure every eligible pass catcher is covered. They also will most likely play most of the game in a nickel package to match up against Oklahoma's three wide receiver sets. Jalen Saunders is the Sooner's biggest receiving threat with 94 yards per game since he was deemed eligible. On the outside, it is Kenny Stills and Penn State transfer Justin Brown accounting for 75 and 68 yards per game respectively. But the Aggies will also have to make sure the running back, Damien Williams, is covered out of the backfield as well as fullback Trey Millard. If the Aggies want to defend the passing game successfully, it will take both the secondary and linebackers to play sound man coverage against all of these receiving options.

But where is the Oklahoma passing game the weakest? Along the offensive line in pass protection. 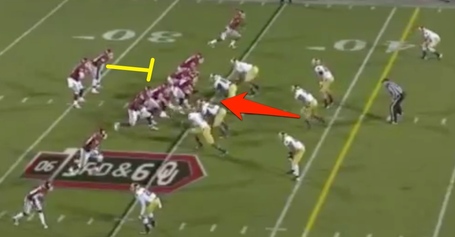 Let's take a look at one of Monte Te'o's (is that proper grammar?) few sacks on the season. On this 3rd and six, Notre Dame will bring 5 defenders on a pass rush, including Te'o from his linebacker position on a little bit of a delayed blitz look. The running back Damien Williams will stay in the back field to pass protect, leaving 6 Oklahoma blockers to handle 5 Notre Dame blitzers. 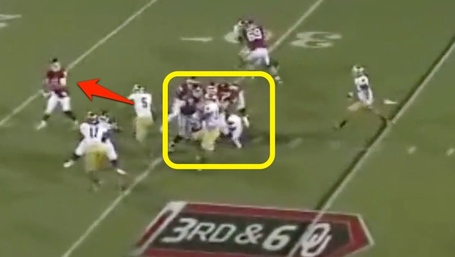 After the snap, Te'o is left free to sack Jones, literally untouched. This is due to poor communication by the middle of the Sooner offensive line. Notice how 4 Sooners are only blocking the two Notre Dame defensive tackles.

What went wrong? Poor offensive line communication. As seen from this angle, the right offensive guard should have moved to his right picking up the blitzing Te'o. This is especially true since the line had the running back as a 6th blocker to the left side of the line. Instead, the guard and center focus on the defensive tackle, who was really trying to slant inside anyway.

Opportunities are there for the Aggie defense to make plays on Landry. Mark Snyder can get creative with his blitz package, as long as the Sooner underneath passing options remain covered and all 11 defensive players know the concepts, the scheme, and who they are covering on the play. With 6 weeks to prepare for this matchup, that should be plenty of time for the Aggie defense to get ready and focused in on stopping the Sooners and leaving some surprises for Jones and his offensive line on Friday night.