So let's see, since the last time we talked, we've lost three straight, Elston cooled off just a bit, and we've scored more than 50 only once? Against the worst team in the SEC? Wait wait wait, surely we're about to PLAY the worst team, right? Oh, they beat the team we just lost to? Incoming: TRANSITIVE PROPERTY LOSS. But I guess they'll still play the game, correct? [checks] Yes, it seems they will. And as long as we're playing the game, we should still do the preview? [checks] Yes, it seems we will. 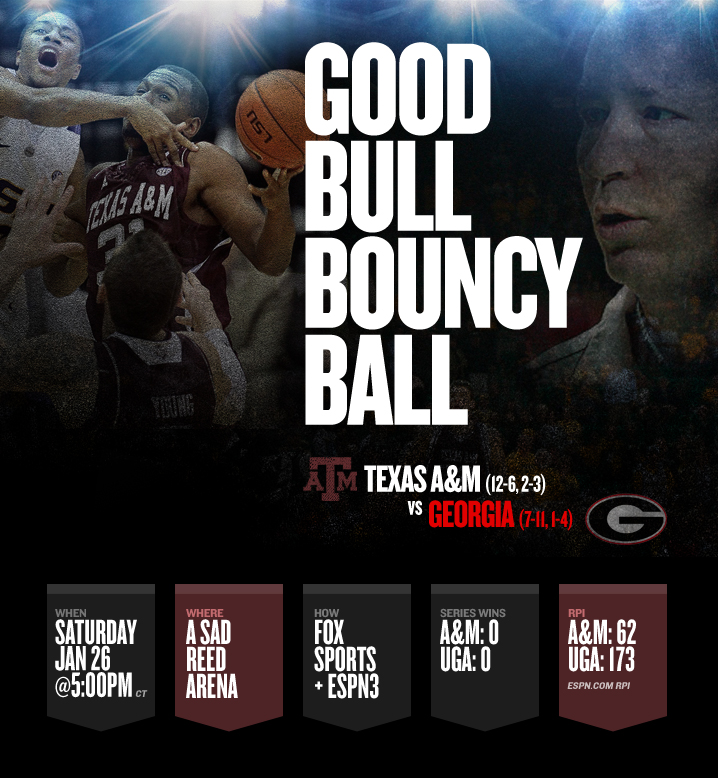 Well, things have certainly gone in the least preferred route since the Aggies beat Kentucky in Rupp Arena. Since that win, the Aggies have suffered 3 straight losses and only scored 47, 49, and 54 points in those games. To pour a little salt on the wound, sharp-shooter Elston Turner is in a pretty nasty shooting slump going 8-30 (2-15 from the arc) since going off for 40 against Kentucky. It is common for shooters to hit a slump at some point in time during the season, but opponents seem to have found the recipe for shutting Turner down and not letting him create any opportunities. The loss to Florida was understandable. That is a really good basketball team that should waltz straight to the Final Four if they can stay healthy. The loss to Alabama hurt. They are a decent team at best. The loss to LSU was just ugly. The Aggies had 24 turnovers in that game. Green, Caruso, and Reese combined for 15 turnovers and 10 points. It's going to be pretty difficult for any team to win a game on the road when 1/3 of your players on the court are putting up numbers like that. There was a positive to take away from the LSU game that Aggie fans should really keep an eye on. Fabyon Harris went off for 19 points in the game and showed everyone the type of heart and passion that he plays the game with. The Aggies desperately need another scorer to step up in a big way if teams are going to continue to contain Elston Turner.

Look, we are all die-hard Aggie fans over here, and we really want to talk about the positive things. There is one really big positive thing about the game against Georgia at Reed Arena on Saturday. Georgia is a horrible basketball team. Horrible. The Bulldogs have losses to Mississippi State (RPI 233) and Youngstown State (RPI 171). Just in case you were wondering, their best win of the season is against an 8-11 Southern Cal team that has an RPI of 141. Statistically, the Georgia Bulldogs rank in the bottom third of the nation in points per game, rebounds per game, assists per game, and field goal percentage. I'm probably going to regret writing this, but there is one threat to the Aggies on this Georgia team. Sophomore guard Kentavious Caldwell-Pope is averaging 17.1 points per game on the season, and 16 points per game in SEC play. He's not a great shooter, but his length and ability to drive the lane can cause problems for the Aggies. If we can coax a Dominque Kirk-like defensive effort from our guards tomorrow night, the Aggies will come away with a much needed victory.

I think it goes without saying that the Ags need to put an end to the three game slide to have any attempt at saving the remainder of the season. They definitely can't afford another sloppy half of basketball like we saw against LSU. Like I said, the good news is that Georgia is horrible this season. Fans should be confident in an Aggie victo.....What's that? Shit. Georgia beat LSU last week.

Oh hey look you guys, SOMEONE WHO CARES. Don't get too close though, it might rub off on you, ok? Pretty sure it's contagious, so if we just leave him alone, he'll eventually start reading TexAgs and become as apathetic as the rest of us. I would have loved to be a fly on the wall of the Aggie locker room at halftime of the LSU game. I picture Fabyon as John Belushi, and it going a little something like this. Can I just get this off my chest? I DON'T CARE IF YOU LOSE IF YOU'RE TRYING TO WIN. Okay, I care a little. But you get it. I know you do. Don't lie to me, you get it.

Do we really need to wait 13 more games to award the Best Name of the Year award? It would just be a formality at this point, right? Amirite? Crazy amazing name aside, this is pretty much the entire Georgia team right here. He's taken more shots than the next two guys combined, more than 40% of the team's 3-pointers, plays 10 more minutes than anyone else, and oh yeah, he's a guard...WHO LEADS THE TEAM IN REBOUNDS. It's as much a 1-man-show as I've ever seen. Fine, fine, I haven't technically "seen" it yet. But numbers don't lie, friends. They're not dirty liars like they'd have you believe. Outside of KCP, Georgia is actually pretty deep; they have 11 guys playing 10+ minutes per game. Wait, is that even legal? I could have swore you were only allowed like 8 total scholarship players, and every year you have to kick at least 2 off. Sort of like Survivor. Am I wrong here?

I knew there could be only one explanation for Georgia landing a 5-star McDonald's All-American. The man is a master of deception and punishment. This recuiting pitch worked for Kentavious and it would work for you: "I believe in two things: discipline and the Bible. Here you'll receive both. Put your trust in the Lord; your ass belongs to me. Welcome to Georgia Basketball."

The only Aggie to show up in Baton Rouge, Fabyon led all scorers with his 19 points. Harris also collected 4 rebounds, had 2 assists, 3 steals, and only 2 TOs. At least someone in an Aggie jersey wanted to play on Wednesday.

WE STILL WIN AT REBOUNDS

The Aggies continue their streak of winning the rebound battle. Despite losing, the boards kept the Ags in the past two games. Led by Kourtney Roberson, Texas A&M beat Alabama 27-25 and LSU 38-34 on the boards.

Throwing Ball to Other Teams

The sole reason the Aggies got beat by a terrible LSU team was the turnover margin. J'Mychal Reese led the team with six turnovers, followed by five from Jordan Green and four from Alex Caruso. The Aggies had 24 total TOs, compared to 11 from the Tigers. 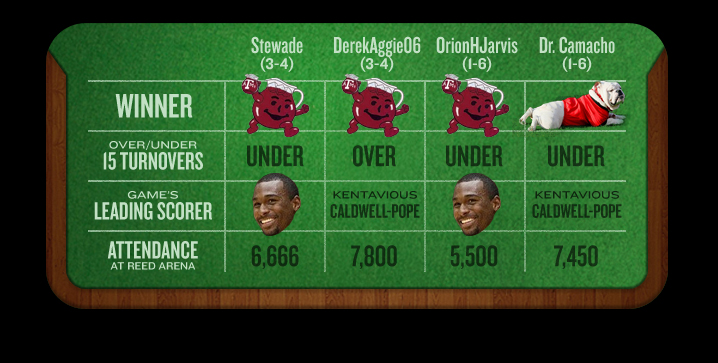 I know you'll be tempted, but trust me, it will not be appropriate to storm the court. No matter what your buddy says sarcastically, this will not be a big win. Act like you've been there before by calmly exiting Reed Arena in an orderly fashion. We have been here before, haven't we?

Go do something constructive, like post angry faces on TexAgs and talk about Billy Kennedy's buyout and things. You're gonna do this even if we win, aren't you? 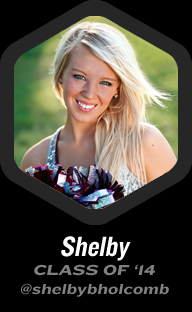 The Florida game was crazy! I have never seen a crowd like that at Reed the past two years that I've been on this team. It actually made me nervous, but it was the good kind that gets you really pumped up. Dancing in front of larger crowds will always make you have more energy and dance bigger. It was nice to have so many people there to support the basketball team.

How much of the game do ya'll really get to watch?

While sitting courtside at the games there is a lot we have to be thinking about .Most of the time it's what dance is next or running through the dances in our minds before we go out to perform. There are so many things that go on during games, but you have to be watching and paying attention because you never know when the ball is about to fly at you and hit you in the face or some player is about to trample you in attempt to keep the ball from going out of bounds.

I am more of a country music kind of girl, but I don't have a favorite song in particular.

Kiss of death? Or blessing of success? RT @GottliebShow I love the Ags tonight on the road at #LSU--

#AggieHoops just had another turnover.