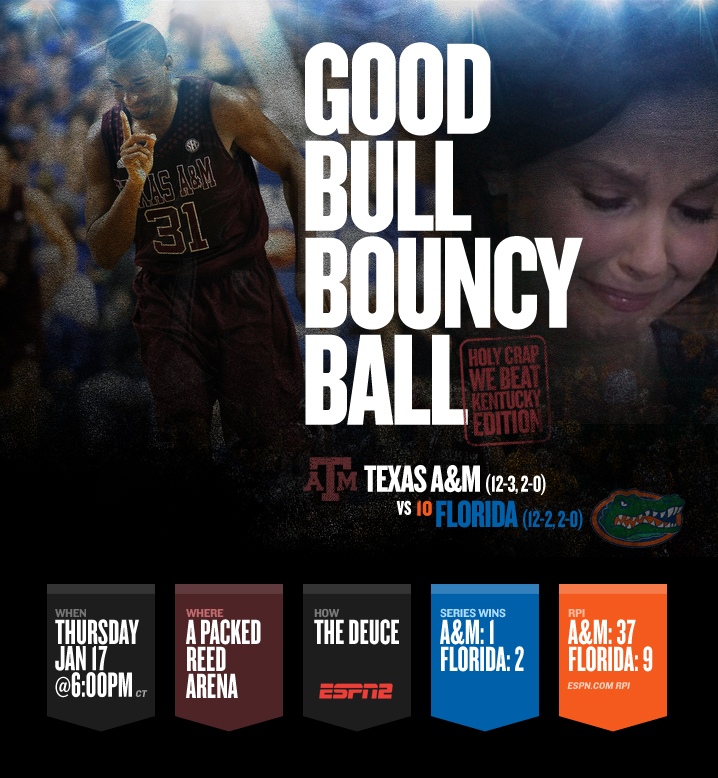 So you're saying there's a chance?

Just as we predicted and expected in our No-Holds-Barred, Surefire, Masterlock Pick of the Week, the Aggies rolled through Rupp Arena and came away with a victory over the Kentucky Wildcats. Who didn't see that coming? No, really. I had more fun watching an Aggie basketball game last Saturday than I have in what seems like a pretty long time. A big win and a big performance like that from the senior leader on your team can really change the direction of a program. Don't believe? Ask anyone that was in Reed Arena when Acie Law hit "The Shot". You started to see the rest of the team feed off of Elston's performance as the game went on. The big question is going to be how much of that momentum can carry over to tomorrow night.

The team ended the game with the type of energy they are going to need as they prepare for tomorrow night's showdown with #10 Florida Gators. The Gators come in to Reed Arena (we need a Hate Barn type of nickname here) with a 12-2 record. They are one of the hottest shooting teams in the country, and big 6'10" Forward Erik Muprhy is a big reason for that. Murphy's ability to get hot from behind the arc can spur a run for the Gators that is tough for any team to keep up with and counter. The good news is that the Gators have only played two challenging road games this season, and they came up short in both. One in particular to look at is their loss to Kansas State where they shot 5 for 19 from behind the arc. Another piece of good news is that Erik Murphy had a tough shooting game last week against LSU, shooting 5 for 13 from the field. Keep an eye on Coach Donovan to get Murphy the ball at the top of the key in transition early in the game to get him rolling. Florida is a solid basketball team this year. They have the composition and experience to make a solid run towards the Final Four of the NCAA Tournament. Hey, we were 15 point underdogs to Kentucky. Sooooo we're saying there's a chance.

The keys for the Aggies to come away with what would be a massive home court victory are to keep playing the way they've been playing since the Houston Baptist game. We've seen very distinct and consistent improvement each game since that win. It's pretty safe to assume the team is going to come out with a lot of energy behind what looks to be a packed Reed Arena. It's going to be important for Ray Turner to show a little control and stay out of foul trouble in the first half. Another interesting note to keep an eye on is that in the three losses the Aggies have this season, Fabyon Harris has scored in single digits. In every game since the loss to Southern, Fabyon has scored double digits and is averaging 13.5 points per game in that stretch. That would put him right on par with the leading scorer for the Gators. If Fabyon can get his points, if J'Mychal Reese is able to control the tempo when Florida turns up the pressure, and if the big man combo of Turner, Roberson, Young, and Jahns (let that sink in a little) can control the glass, look for the Aggies to make headlines again this week.

For a good, long 45 seconds last Saturday, Elston Turner was trending on Twitter. Worldwide. Because of a game that was on ESPN3.com. That means one of two things: Either literally NOTHING else was happening that day, or a basketball player from Texas A&M was doing something that no basketball player from Texas A&M has any business doing. I don't know, guys, I'm going with the former. Aggie Basketball does not trend otherwise. Does not. DOES NOT. Ok, does on occassion. Shouldn't that lede alone have been enough to tip us off that, oh I don't know, THIS GUY IS CRAZY? I know my sister's last name. Do you?

Kenny Boynton. What more can we say about Kenny Boynton? Not much, cause...I don't really know a lot about him. He beat us last year, that much I know. And therefore, we must END HIM. He's also a helluva 3-point shooter. What's that? Oh, he just takes a lot of three point shots? Got it. Apparently not many of them go in. He's made 20% or fewer of his 3's in seven games this year. For reference, Elston has only had that happen twice. So we know that I guess. We also know that he averages 12.6 points at home, and 16.8 on the road. And 14.8 in wins, and only 8.0 in losses. Hey, look at us! We sort of know stuff about him now. Recipe for Aggie success: Force, then contest Kenny Boynton three-pointers. How's THAT for some X's and O's?

The power attire. The widow’s peak. The calm, yet domineering demeanor. Like Stannson, he’d probably take out your knees just to beat you in one-on-one. GRITTY TOUGH FORMER POINT GUARD. GBH was able to procure this exclusive video of Coach Kennedy meeting Donovan earlier this year.

Elston made it rain on Ashley Judd and 24,193 of her closest friends in a packed Rupp Arena. Turner was the first Aggie to score 40 points since 1985. As Thacktor said this week, "Elston Turner gave Ashley Judd 40 reasons to go home and rename her ridged female pleasure device 'Ol Sarge' last Saturday."

It's been a very long time since there has been this much excitement around Aggie hoops. Kicking their SEC campaign off right with impressive wins over Kentucky and Arkansas will do that. 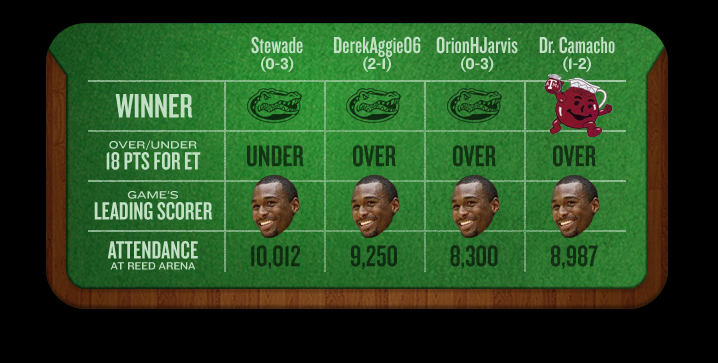 I have literally no idea why you're not skipping this section after I boldly proclaimed a win against Kentucky would mean that you should "stop doing acid." Clearly, and I can't stress this enough, the first Aggie basketball I've been able to watch this year was the Arkansas game. I watched that after I wrote the "when we" segment and figured I'd be wrong. I'll make it up to you by filling your collective Aggie Basketball spank bank with a glorious image: Elston Roundball catches an ally oop from Johnny Football for what will clench the game. It will forever be called the "Vengeance Slam."

Manziel will burn the entire Florida team with flames from his eyes until their screams are silenced by the hot air burning their vocal cords. Metaphorically speaking, of course. I'm only kidding.

I'm not kidding. He can actually do that.

When Johnny burns the entire Florida team with flames from his eyes: RUN! WHAT THE HELL ARE YOU STILL DOING IN HERE! GET THE F*** OUT OF HERE! THE MAN JUST SHOT FIRE! FROM HIS EYES! THEY COULD NOT ESCAPE THE CONSUMING FIRE THAT WOULD EVENTUALLY DEVOUR THEM! RIGHT IN FRONT OF YOU! WHY ARE YOU STILL HERE!

Just had a great dinner after a 4 training session today... Now watching my #Gators basketball whoop up on Georgia

"@ThePaulGallant: @JoshInnesRadio what is SEC basketball?" You remember Aggie hoops, Paul. Crushed the 'Cuse in tourney your freshman year.

@ElstonTurner31 you already know. Ill be back in CS tomorrow. I gotta make sure Reed is rocking for the game later this week

Thursday's #TAMU-#UF clash will feature two of the better coaching haircuts in the SEC, @Coach_Kennedy and Billy Donovan. #stylish

So in year one in the SEC, A&M will have a Heisman winner, a football win at Alabama, and a basketball win at Kentucky. Not bad.