Big things were expected of Jonathan Stewart when he arrived as a 4-star recruit out of Shreveport, Louisiana (Top 15 in the state). Part of Mike Sherman's first recruiting class, Stewart signed on to an Aggie team at a 20 year low and in sore need of defense. He was recruited as an outside linebacker, and was thrown straight into the fray, starting his very first game as a true freshman against New Mexico.

Very few true freshmen have started at linebacker for A&M, and one might have thought he was bound for immediate stardom. However, that was not to be the case as Stewart was replaced in the starting lineup prior to the Iowa State game, but he still managed to record 28 tackles on the year, including 3 against Georgia in the Independence Bowl before his hometown crowd.

The Aggies lost that Independence Bowl, partly the result of a defense that finished 105th in the country. Defensive coordinator Joe Kines stopped trying to stop the inside trout and resigned, and was replaced by Tim DeRuyter who replaced Kines 4-3 system with a 3-4 look. Stewart was shifted to middle linebacker, where he was submerged beneath beneath Garrick Williams, Michael Hodges, and Kyle Mangan on the depth chart. While the Aggies' star would rise in 2010, Stewart's fell, and he saw very limited action starting no games and recording only 7 tackles as sophomore.

This is where most athlete's stories end. It is not uncommon for players to allow themselves to be shuffled out after being thrown into depth chart hell. In today's college environment, players are often asked to change positions before being summarily forgotten. It can be a death knell for a player's career. Even more common is for players that lose confidence or wind up in a coaches doghouse to never find their way back to the playing field. However, Jonathan Stewart is not that kind of person who quits. Rather than sulk about two forgettable years, Stewart embraced the challenge. In Rusty Burson's article for 12th Man Magazine, Stewart is quoted as follows:

"When I got switched to inside linebacker following my freshman year, I probably didn't learn it as quickly as I needed to, which was my own fault," Stewart said. "I really dedicated myself halfway through the season to learning everything I could, but I was behind and I knew I really needed to absorb everything Coach Nguyen was telling me.

"I learned a lot from watching Michael Hodges, and then Coach Nguyen really helped me on the mental side of the game. He would teach you all sorts of stuff to look for on film and teach you how you can read a guy's eyes pre-snap to get an idea about what play is coming next. He showed you little things, and I just tried to take it all in and learn from the best."

"After my sophomore season, I realized that I only have two more years of college left, and the first two years flew by faster than I could have ever imagined," Stewart said. "My ultimate goal is to reach the NFL, and following that year, I realized I only had 24 interviews left. I consider each game as a job interview for the next level. To get to the NFL you have to be an elite player and do something to stand out in those ‘interviews.'

"I looked around and saw students who didn't play sports dedicating themselves to the books, so that they can have success being lawyers or geologists. I wanted to have success in the NFL, so I dedicated myself to the game. And not just playing the game. You have to study, you have to hydrate all week, eat right, watch film and do the little things. (Baltimore Ravens linebacker) Ray Lewis has said that greatness is a whole lot of little things stacked on top of each other. I really believe that's true, and I am trying to stack together as many positive things as I can in the time I have left at A&M. I want to leave a legacy."

Stewart's re-dedication paid off, and he emerged in 2011 to lead the team in tackles with 98. Stewart had 55 solo tackles and 5.5 tackles for a loss, the same totals that Manti Teo had this season. He also had 3 sacks and 2 forced fumbles (eat your heart out Manti). However, as Stewart's fortunes rose, the Aggies fell, and both Mike Sherman and Tim DeRuyter were gone as he prepared to enter his senior season.

Again, Jonathan Stewart was faced with adversity, and again Jonathan Stewart met the challenge with character. He started every game at middle linebacker in Mark Snyder's 4-3 scheme, his third defensive system in four years. Stewart finished second behind Damontre Moore in tackles with 81, including 46 solo stops and 2.5 sacks. More important than that, Stewart was the vocal leader on the field, responsible calling the plays and packages for Mark Snyder.

This is pretty much a no-brainer: 2012 Florida. Stewart led the team with 17 tackles, including 11 solo tackles and half a sack. I'm glad I was there in person with great seats to see it along with Dr. Camacho.

How He Should Be Remembered 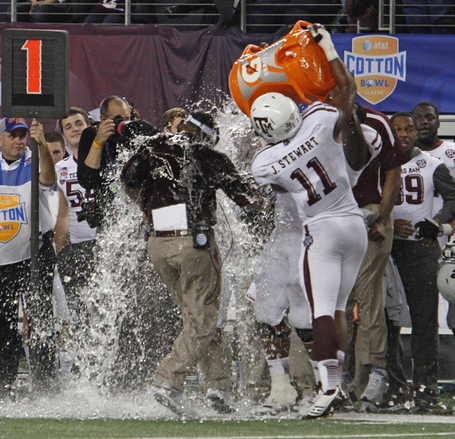 This season Stewart was backed by walk on Justin Bass. Nothing against Mr. Bass (whose brother Ben Bass played for A&M and now plays for the Dallas Cowboys), but it doesn't take much of an imagination how A&M's defense would have suffered had Jonathan Stewart not been around. Jonathan Stewart never quit. He adapted and he overcame. Much was expected of him when he arrived, and much was demanded of him this season. In my opinion, Jonathan Stewart delivered on both accounts. As the middle linebacker, Stewart was tasked with bearing the physical brunt of the run heavy SEC attacks of Florida, LSU, and Alabama. He played his heart out knowing that the Aggies' lack of defensive depth meant there was nobody available to replace him. He should be remembered as the linchpin of a 2012 defense that took the first giant steps towards restoring the Wrecking Crew. Jonathan Stewart was an unsung hero who was the glue of this defense, and that is why he is the perfect person to begin our tribute to this year's seniors.