Aggie Basketball. Whether you like it or not, it's back baby! And it's got PERSONALITY. Well, at least it did last Wednesday. However robotic BK can be, his guys played like they actually cared who won that game. Billy even made a joke in the press conference. Seriously, go watch. It was a real life joke. People laughed. So what if he isn't emotional? Maybe he's a robot sent from the future, who, at first you think has been sent to singlehandedly destroy everything we came to love about A&M basketball. But we quickly learn he's here to protect it, and maybe he'll actually do that if he has the chance. But if most fans had their way, he'd be half-sunken in molten lava while giggin' it by now. Let's hope it doesn't come to that. It's the dawn of a new day in Aggie basketball on Good Bull Hunting. And I, for one, welcome our new robot overlord. LET'S DO THIS. 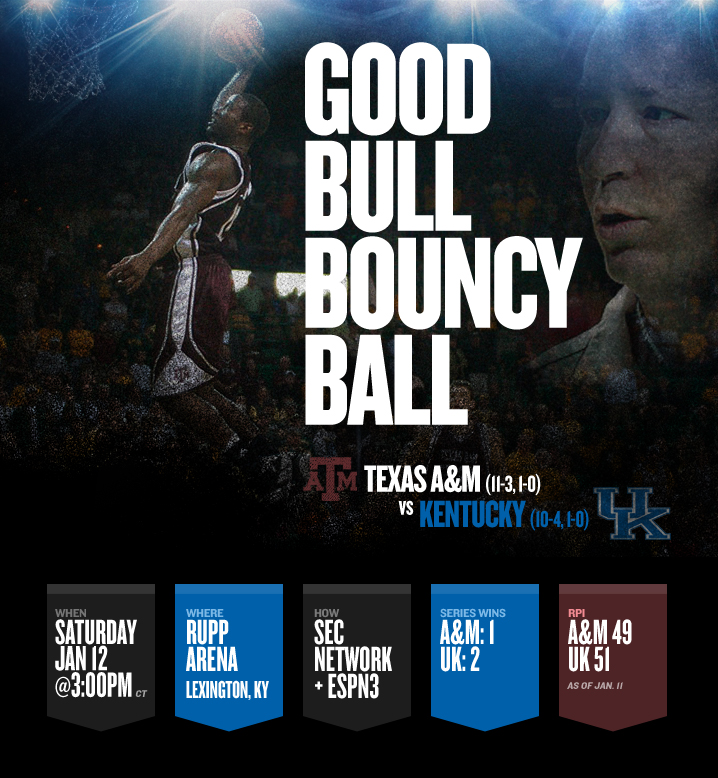 The Aggies are coming off an outstanding win over the Arkansas Razorbacks in their first conference hoops game in the SEC. I think Aggie fans finally saw a little bit of electricity from the crowd at Reed, and the team clearly fed off of it. An exciting win like that can really turn the tide for a team midseason. If they get two wins in a row like that, things can really get wild. Let's see, who's next on the schedule? Shit. Kentucky, at Rupp Arena.

Okay, the initial overreaction is out of the way. Deep breaths everyone. This is not the Kentucky team that we all watched take over the nation last season. Coach Calipari still has his stable of blue-chip youngsters, but this Kentucky team hasn't been able to put it all together on the court consistently. While they aren't sloppy with the ball (both the Aggies and Wildcats average 12.7 Turnovers/Game), they are lacking the scoring runs that Coach Cal teams typically display later in the season. That's a huge plus for the Aggies going into this game. Coach Kennedy takes his team into Rupp Arena to battle a young Wildcat team still trying to work on their consistency and chemistry on the court. The downside to that is that the Aggies are in the exact same boat right now.

The Aggies made massive strides in their last game by flat out dominating the boards and getting up and down the floor. The system we saw Coach Kennedy use at Murray State made a loud and clear statement at Reed Arena on Wednesday. That message was that things are starting to click for this talented Aggie roster. A win or a close game on the road at Rupp Arena would do wonders for the team, and a fanbase that needs a swift kick in the rear to get energized behind the team. Keep an eye on the perimeter defense of Jordan Green and Alex Caruso as they rotate on the Kentucky guards to prevent dribble penetration to the top of the key. My eyes will be glued to the battle on the blocks as the Aggie big man rotation of Turner, Roberson, and Young face off against the greatest flat top in college hoops, Nerlens Noel.

El Presidente (do we still call him that, or do we just not care enough anymore?) was in full force on Wednesday night when Arkansas visited Reed Arena. He put up a journeyman's-worth 9 points, but grabbed 5 EFF YOU offensive rebounds and didn't turn it over once. Now it’s time for him to show he can do something similar in what I'm calling the third-most intimidating road venue in these United States of America. Don't argue. It's science.

Remember Cole Aldrich? What about Jeff Withey (who's having an insane year, by the way)? If you don’t, they’re the guys the announcers like to lazily call the “trees” that blocked just about every shot that A&M "power" forwards would jack up against Kansas over the past 4 years. 24 of them were nifty David Loubeau baby hooks, but who's counting? Those two guys averaged 3.5 and 3.6 blocks a game during that time. Guess who else does. Oh, right, he's right above this. Yeah, that guy. His hair blocks half of those on its own, though. It’s very beard-like that way.

In a statistical category where the Ags have been abysmal this year, things took a drastic turn for the better. Behind Kourtney Roberson's twelve boards, The Aggies out-rebounded Arkansas 47-25. Funny how the scoreboard improves when rebounding does....

Mr. Watkins is now 0 for his last 26 games involving Texas A&M. To recap, he went a 0-17 run to finish his final year as the head coach in Aggieland. He followed that up with an 0-8 record versus the Ags as a Mizzou assistant and carried it over to Wednesday night's drubbing.

The average attendance at home this year has been 4,996 in a building that seats almost 13,000. I don't like to harp on attendance considering the product on the floor recently, but that's pretty bad. Wednesday night's 5,539 was a change in the right direction and lets hope it's a trend that continues. 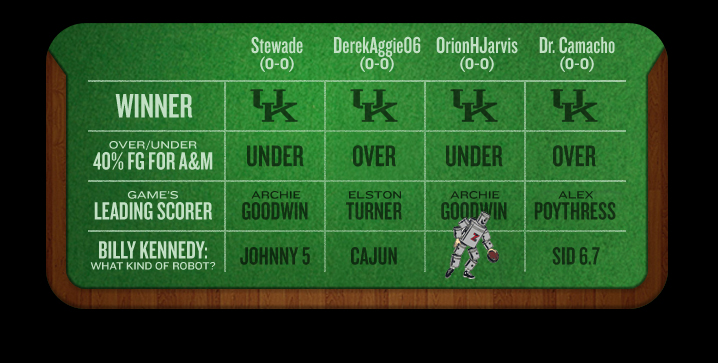 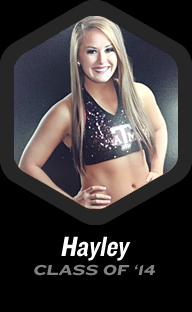 When the women won the National Championship. This moment is huge in the basketball program at Texas A&M and I am so lucky to be a student here and witness this wonderful accomplishment!

Best thing about being on the ADT?

Having the opportunity to entertain a crowd of people at Reed Arena by doing what I love. Also, the little girls that look up to us is another great thing about being on the Aggie Dance Team. I love knowing that someday these little girls want to be doing exactly what I'm doing.

Favorite song to dance to at Reed?

Any type of hip-hop song that can pump up the crowd. In order to get the crowd's attention we must have a song that shows we are having a good time dancing on the court. I'm very diverse with the music I listen to, I honestly don't have a favorite song because I love any type of genre.

Stop doing acid. Like now. I'm telling you this because if you see A&M win tonight, that's the reason. It's about to go badly for you, brah. Go somewhere safe and warm. Nothing against this team, I hope I'm wrong. I wanna be wrong. MAKE ME WRONG!!!!! When I'm wrong: Write an article quoting me and telling me how stupid I am for making a grand statement about sports and put it on an SB Nation blog of some kind. I hear that's a healthy way to exercise your anger with me. Also, play this as loudly as possible.

Go on about your business. Keep being a fan because this team deserves it. If you're a student, how about go to some games and get loud. Don't let basketball get to where it was back in the - shudder - Watkins days. Stay... Strong... It's gonna get better.

This BCS National Championship Game was over quicker than a Kentucky Wildcat basketball player's college career.

Aggies win 69-51, but no free chicken. Fabyon, I am disappoint #AggieHoops

Awkward!! I went to wave at & thank ESPN hosts for their hospitality & only Coach Knight saw me & was like, who is that & why is she waving?

Am I the only person who thinks Bob Stoops looks like Billy Gillispie?

For those wondering what Kentucky basketball would look like if players had to stay in school 3 years, see Alabama football.

I would seriously like to kneecap him. RT @KySportsRadio John Calipari monitoring players' heart rates to make sure they give max effort