We are only four days away from the #ATTCBC. Can you believe it has been 5 weeks since Aggie Football last played? With the final game of the season approaching, it is time to get your mind right and focus in on the task of winning 11 games and beating those dirty land thieves.

This year's Cotton Bowl will feature an interesting dynamic for the Texas A&M offense with running backs coach Clarence McKinney taking over play calling duties. One might infer that the Texas A&M offense could see a new emphasis on the running game due to the move. If that is indeed the case, the Aggies might have a favorable matchup on their hands as the Sooner run defense has not performed up to par against their toughest competition. Opponents are averaging 181 yards per game rushing against the Sooner defense. Against Kansas State and Notre Dame, the Sooners allowed 223 and 215 yards on the ground, respectively.

Why has the Sooner defense been so porous against the run? Let's take a look at a couple of examples from their contest against Notre Dame. 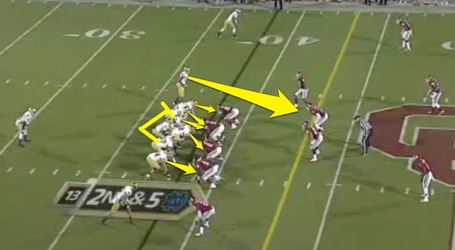 On this play which scored a touchdown for Notre Dame in the second quarter, the Irish lined up in a strong, three wide receiver formation with the tight end lined up on the side of the slot receiver (top of the image). To counter, the Sooners showed a base nickel package with a corner shadowing the slot receiver. The two linebackers on this play are Tom Wort and everyone's favorite Mr. Texas A&M, Corey Nelson.

This run play is a fairly simple design by Notre Dame. It will be run to the strong side with the right guard pulling as a lead blocker for the running back. The left tackle and center down block on the defensive end and 3 technique respectively; the left guard and left tackle will combo the 1 technique with one moving up the second level blocking a linebacker. The tight end is left to block the defensive end to the strong side one on one, and the slot receiver put in motion pre-snap will try to crack Corey Nelson. 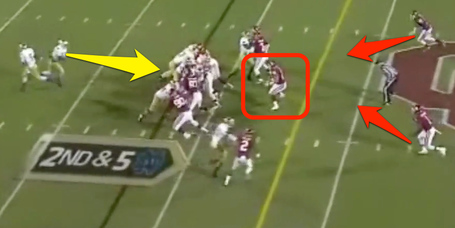 Let's key in on the middle linebacker, Tom Wort, for a second. He is highlight by the red box. Right at the handoff, he is standing flat footed and peering into Notre Dame's backfield. Instead, he should have read the pulling offensive guard and try to take him on at the line of scrimmage. He is letting the play come to him at this point instead of going to make a play. This will be a common theme for the entire Oklahoma defense. They aren't attacking, they are reacting.

I'd aslo like to point out the safeties on this play as well. At the handoff, they are running towards the line of scrimmage in anticipation of a run play. Being only the second quarter and only a 2nd and 5 to go, there is a real chance of a play-action play call. Had this in fact been a play-action, both safeties who were playing a cover 2 look would have been beat deep. It shows you this run defense can be susceptible to the play action, something the A&M offense can take advantage of. 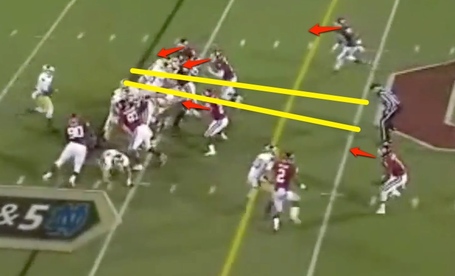 As the run progresses, notice the eyes of the defenders. Everyone has their arms extended on a Notre Dame blocker and are looking in the backfield looking for the ball carrier. Nobody is trying to make a play. Instead, they are inviting the blockers into their body and continuing to drive them off the ball. More reacting by the defense.

At the linebacker position, the offensive tackle has come off of his combo block to reach Tom Wort, and Corey Nelson is being blocked by a slot receiver. The running lane that will develop will split the two linebackers right down the heart of the defense. 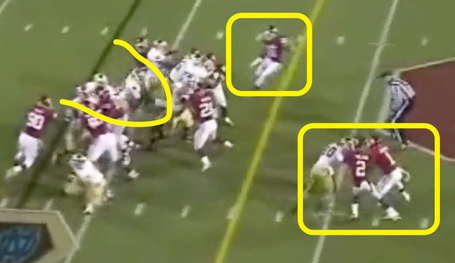 As the running back makes his way through wash of bodies, look how far the Oklahoma defensive line has been driven off the ball. The middle of the Notre Dame line has pushed the defensive tackles and linebackers 3 to 4 yards off the line of scrimmage! This creates a nice (and poorly drawn) pocket for the running back to enter.

The safeties, who were playing some outside containment, are in horrible positon to stop this play once the running back breaks through the line. One safety is too far outside and upfield taking himself out of the play, while the other is being blocked by a wide receiver along with a corner. A Notre Dame receiver is blocking a corner and a safety! 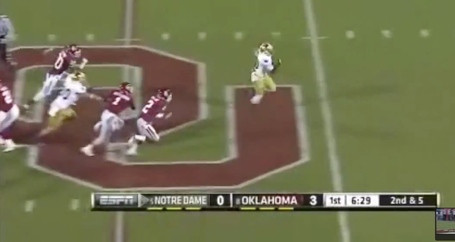 The running back will run right down the middle of the field untouched for a TD.

To emphasize how weak the Oklahoma defense is up front, let's look at another play in the 4th quarter with the game on the line. This time Oklahoma is playing in their base 4-3 defense. 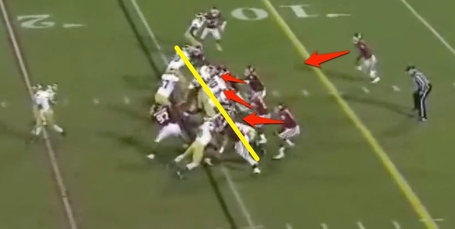 At the handoff, Once again the Notre Dame offensive line has blown Oklahoma off the ball by 2-3 yards. There is hardly any penetration and the linebackers aren't being active enough trying to fill their gap assignments. On this play I am not sure it would matter as the defensive line is being pushed back into them. There is only one Oklahoma player that constantly provides penetration and that is #97 Jamarkus McFarland as seen on this play. Unfortunately for him, by the time he is able to make a play the running back will have run right past him. That is the only player the Aggies will have to worry about up front on Friday.

Also, notice once again how many Sooner defenders have their eyes in the backfield looking for the ball carrier, waiting for him to come to them. This type of reactionary play could give the Aggies an easy 5 yards per rushing attempt and a consistent ground game.

Many people have stated this Oklahoma team isn't up to par for Bob Stoops' program. At 10-2 that statement seems a little ludicrous, but it is true for the Sooner defensive front seven. There aren't any playmakers in the group besides McFarland and the depth is poor. For a Cotton Bowl win, the Aggies can simply wear down the Sooners up front running 90+ plays in the game, and rush for a win late.