Share All sharing options for: How Texas A&M Will Take Advantage of Florida Gator Defense: Part 2

Yesterday we broke down for you Bowling Green's second touchdown run from this past Saturday and illustrated how Texas A&M can take advantage with some of the same principles. Today, we will show you another play in which Florida's aggressiveness on defense cost them a huge gain by the opponent. Read on to find out how this simple play should be a staple of the Aggie attack when game day finally arrives.

So yesterday we looked at how Bowling Green took advantage of an aggressive Florida defense. Today, I'm going to show you another simple play that Bowling Green ran in the second half of the game off an in-game adjustment that went for a huge gain. Every team runs this play and it should be a staple of the Kliff Kingsbury offense come Saturday. But when Florida over-plays it with their aggressiveness and speed off the edge, Bowling Green picks up a clean 14 yards and a first down to extend a drive. How simple is it? Let's take a look. 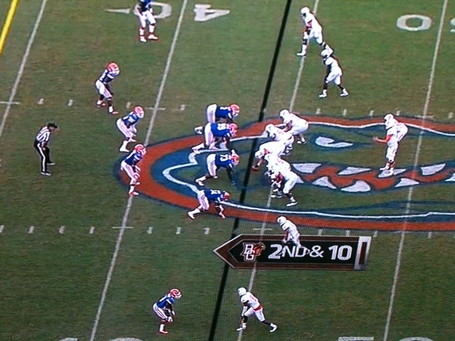 Here is how the teams lined up before the snap of the ball. Bowling Green shows a spread formation out of the shotgun, something the Aggies will run a lot of on Saturday. 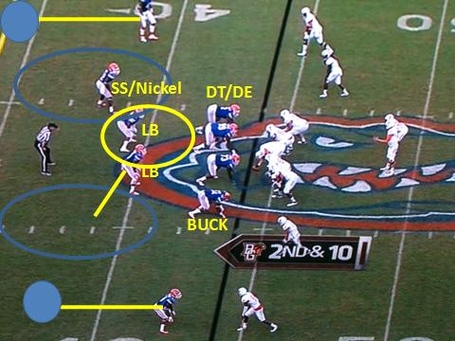 Here I have marked for you Florida's personnel they have on the field to defend this 2nd down and 10 yards to go play and what scheme they have called. Yesterday we talked about Florida's nickel package -- 4 down lineman, 2 linebackers, and the safety Matt Elam as the nickelback. It's the same personnel on this play. The defensive lineman substitution is a little different -- All-SEC defender Dominique Easley has moved outside to play defensive end at the top of the screen. The other end spot is played by what Muschamp calls his BUCK linebacker -- basically a linebacker/defensive end hybrid who will rush the passer. Here it is #34 Lerentee McCray, who has his hands down on the play to give him a better burst off the edge. Another All-SEC defensive tackle Sharrif Floyd is on the line along with #99 Omar Hunter. This is a strong group who is going to rush the passer but also strong enough to play the run.

The Gators will go into a simple Cover 4 look at the snap of the ball which I have dictated for you. The four down lineman will rush the passer, the two corners and two safeties (not pictured) will play quarters coverage across the top (responsible for coverage on 1/4 of the field), and Jelani Jenkins the linebacker along with the nickelback Matt Elam will split the outside coverage in the first 10-12 yards, playing over the slot receivers. The middle linebacker Michael Taylor will play coverage in the middle of the field. A very basic, simple play call. Nothing fancy here. 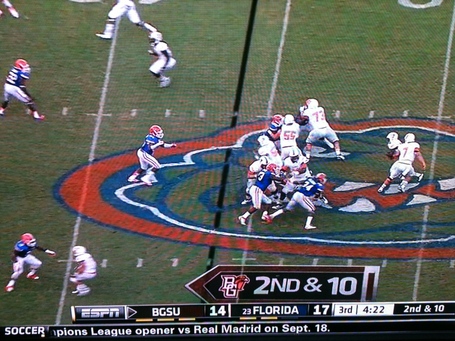 Bowling Green has chosen to run a simple draw play on second down. Notice how the Gator defense is playing this. Both Matt Elam and Jelani Jenkins have moved to play outside the hashes to cover the slot receivers after the snap. That means the only defender Florida has to cover in the middle of the field is the middle linebacker. Bad choice for this play call. As you can see, the Bowling Green lineman are running this play perfectly. The guards and tackles are taking care of the four down lineman rushing up the field leaving the center free to move onto the middle linebacker. A hat is on a hat and the running back will have a lot of options as the play develops. 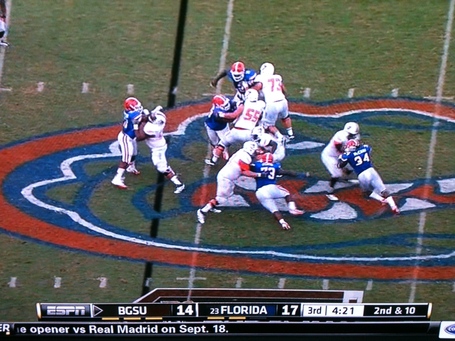 Every Florida defender that is an immediate threat has been taken care of on this play. The Bowling Green lineman have given up ground to allow the running back lanes to run through. The middle linebacker has been picked up and there is a lot of daylight past the line of scrimmage. What I want to note here is just how far the Florida defensive line has come up the field. 2-6 yards past the line of scrimmage! That is really aggressive and was most likely driven by their frustration in not being able to get to the QB earlier in the game. They got the green light to rush the passer and Bowling Green is countering this call. Had they not been so aggressive in rushing up field, they could have played at the line of scrimmage and stopped this play with minimal gain. 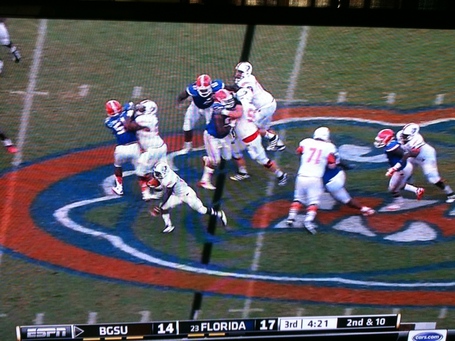 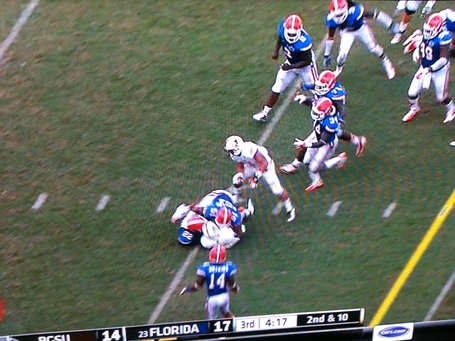 And Bowling Green is able to pick up a nice 14 or 15 yards on this play to extend their drive past midfield and put them in a position to go ahead for the lead or tie the game late in the 3rd quarter.

This play shows how frustrated the Texas A&M coaches must feel after reviewing film. Unlike our previous play we showed you in Part 1 with the blitz call and defensive line stunt combination, this call by the Florida defense is as vanilla as it gets. There surly is no way Florida schemes this way on Saturday, right? But the telling part the coaches can take away from this is how Florida lined up against a spread look. The same nickel package we have talked about before.

What is interesting is that in a press conference this week, Muschamp hinted that Florida may play a lot of dime package against Texas A&M (6 defensive backs and 1 linebacker). If so, expect a similar play call by Kliff Kingsbury and the Aggies. If the Florida defensive line wants to be that aggressive in getting to Johnny Manziel, then counter with the draw play to either Christine Michael or Trey Williams. Stop the defensive line from playing so aggressive and then come back and take advantage with a pass play allowing Johnny to throw the ball with little pressure from the defensive rush.

I feel like its going to be a cat and mouse game played between the Aggie offense and Gator defense on Saturday. Expect a lot of in-game adjustments like this play call by Bowling Green allowing the Aggies to pick up easy yards. But at the same time, don't expect the Florida defense to play so vanilla and soft.

This is going to be an exciting game on Saturday, and I hope you are as ready as I am.