Share All sharing options for: How Texas A&M Will Take Advantage of Florida Gator Defense: Part 1

It's getting closer to Texas A&M's debut in the SEC. If the Aggies plan to win their opener, then they will most certainly have to establish a run game with their talented offensive line featuring Luke Joeckel and their stud tailback Christine Michael. How will the Aggies do this against the tenacious Florida Gator defense? Read on as we take a look in Part 1 of 2 of what Bowling Green did to cause Muschamp to blow a gasket last Saturday and how the Aggies can replicate this on gameday to seal their first SEC victory.

If Texas A&M plans to win their SEC opener, it is clear they will have to run the football against the big bad (well, that's what the internet is calling it, anyway) Florida Gator defense. Can they do it? Well, yes they certainly can. Hell, Bowling Green almost did it last weekend in the second half to claim an UPSET ALERT victory at The Swamp. In fact, on his weekly Sunday television show, Coach Will Muschamp emphasized that he was disappointed that Bowling Green was able to run the ball in the second half of the game. So what did they do? Behead a chicken at pregame? The Bowling Green mascot is a falcon so I don't think they can sacrifice next-of-kin. Drink the Waterboy's H2O? Maybe, but we know Gatorade trumps H2O and water sucks. Take advantage of Florida's risky defensive calls, their speed, and poor technique? Yep, sure did, so let's take a look. 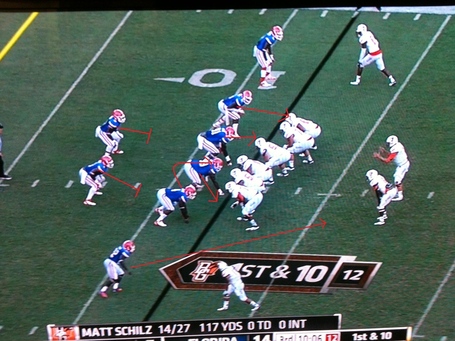 Let's look at how the Florida defense lined up pre-snap before giving up Bowling Green's second touchdown of the day. Florida lines up in this nickel look which they showed much of the game when Bowling Green came out in a spread formation, something the Aggies will do a bunch of on Saturday. In this Gator nickel package, you have 4 defensive lineman (we are counting the rusher standing up at the top as a lineman), two linebackers in studs #1 Jon Bostic and #3 Jelani Jenkins, and your nickelback is actually safety #22 Matt Elam instead of another corner. Out of picture there will be a safety lined up over the tight end at the top of the line and another safety toward the center of the field and shading over the slot receiver.

I have dictated in the picture above in red the blitz that the Gators will be running on this play. At the bottom of the screen Matt Elam, the nickel, will be blitzing. Also, the defensive end to that side will be performing a twist with the defensive tackle (or possibly the linebacker as I'm not sure the tackle ever tried to crash down on the play but that is another discussion). Both linebackers on this play have their eyes in the backfield. Also of note, look how close the corner is playing the receiver in the picture above. That is the type of coverage the Aggies will see most of the game on Saturday, meaning they will have to beat press coverage if they want to be effective in the passing game. 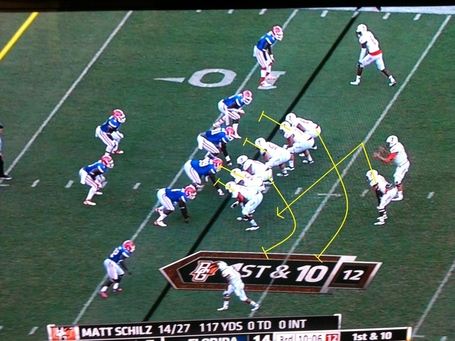 Now let's check out Bowling Green's play call. They will be running a counter play with the running back lined up to the weak side (away from the tight end) in a spread formation. This play will be run with the theory in mind that they can take advantage of Florida's speed by hoping they over pursue to the strong side with then the running back cutting back with blockers in front. The pullers on this play will be the center after he snaps the ball and the tight end lined up to the right. Also note that this is a very similar play to what Vanderbilt was running against South Carolina early in the game (running to the weak side with pulling blockers) on Thursday night. 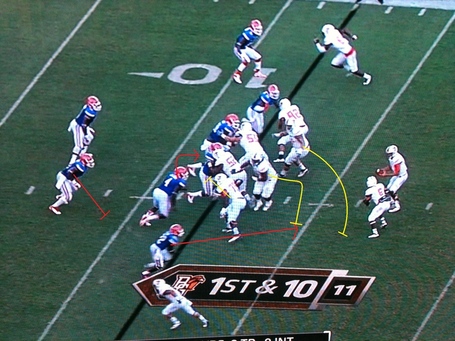 After the snap of the ball, several things are going on. First, you can see Matt Elam coming on the nickel blitz. Second, you can see the defensive end #4 Damien Jacobs starting his twist around the defensive tackle and toward the middle of the line. On this play, I'm fairly certain Jacobs was supposed to remain unblocked and be kicked out by the pulling center with the left tackle trying to block the linebacker on the second level. But because of the stunt, the tackle is left to block inside as Jacobs now becomes an immediate threat. You can also begin to see the center and tight end pulling around. Notice the key block by the left guard on the defensive tackle that was meant to crash down. If the defensive tackle gets any push, the play is dead as the pullers get caught up. But the left guard gets a clean block to drive the tackle off the ball and the play goes on. Proves that the all-world Gator defensive tackles can be had. 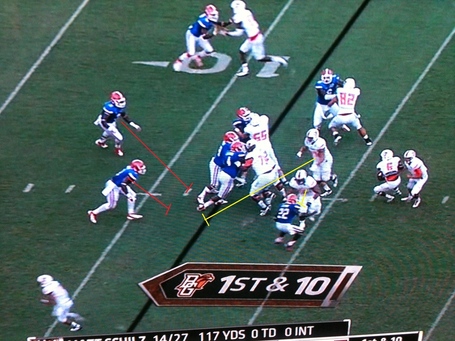 This frame shows that the Bowling Green center has taken the immediate threat of the blitzing nickelback leaving the tight end to block Jon Bostic who is coming to fill the hole. The left tackle has done a great job stopping the twist of Damien Jacobs and has in consequence left a nice hole off the left edge that will help this play develop. The running back has planted and is beginning his cut to follow his lead blockers. 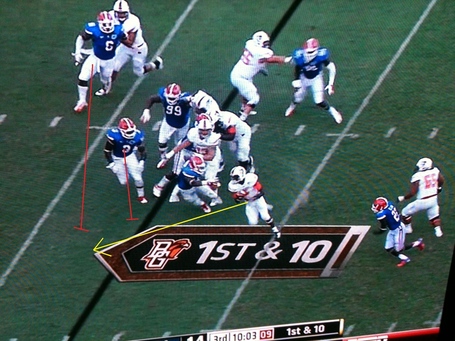 A couple of frames later shows this play in complete meltdown mode. The pulling tight end has met the filling Jon Bostic head on, leaving Jelani Jenkins free to scrape down the line of scrimmage and make the play on the running back. That is, if he doesn't take a poor angle and can actually tackle. I also want to point out here Matt Elam (#22) who was blitzing. Look how far he has gone up the field, 5 or 6 yards back! He has completely taken himself out of the play which will allow this play to succeed. Had he not gone all-out with his blitz, he might have been able to make the play in the opponent's backfield. 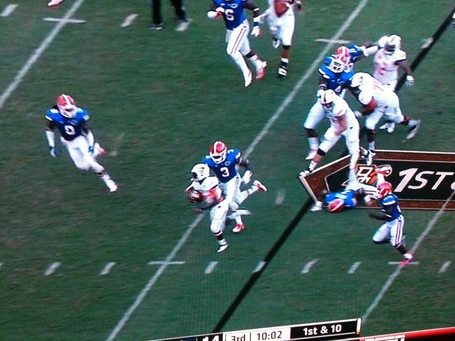 Now that the running back has crossed the line of scrimmage, it looks like Jelani Jenkins took a little bit of a bad angle but still should be in position to make that play, if he can wrap up. Also, #9 Josh Evans is pursuing and should be there to clean up just in case Jenkins can't finish the job. Play over for a minimum gain right? 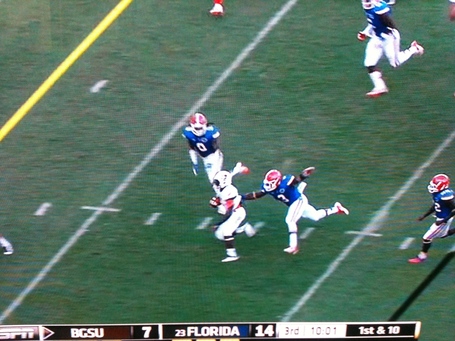 Not so fast my friend. Because of his poor angle, Jelani Jenkins isn't able to wrap up. But Josh Evans has this you guys. 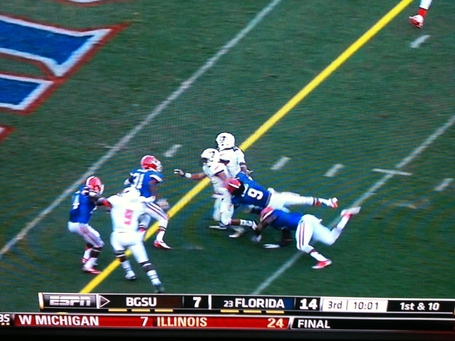 Well, I guess not. Two broken tackles by SEC defenders on a MAC running back. 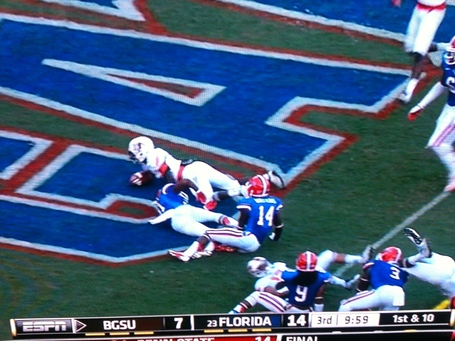 Touchdown Bowling Green to tie up the game.

So what did we learn? Several things --

1) The Gators like playing their nickel package with a safety, Matt Elam, lined up at the nickel position instead of a corner. This is intended to give them a run defender close to the line of scrimmage in substitution of a linebacker. That didn't work on this play.

2) You can take advantage of the Gator defensive play calling. In the same Sunday television show, Muschamp said it was frustrating playing a controlled passing game because they got the ball off so quickly and his defense couldn't get to the quarterback. This play call was most likely a result of that. Can't get to the quarterback with your lineman? Well, let's get risky and send the nickel! It totally backfired on this play as Bowling Green ran right where Matt Elam took himself out of the play. And it will only get worse this week as the Gators will be lining up against Kliff Kingsbury's quick release passing attack. How frustrated will Muschamp get and continue to make risky calls that the Aggie offense can take advantage of?

3) The Gator defensive tackles aren't all they are chalked up to being. I mentioned the critical block by the left guard on the crashing defensive tackle. The guard actually was driving him off the ball! A MAC offensive lineman shouldn't have their way with an SEC defensive tackle. But they did here and it only gets tougher for the Gators as they will face one of the nation's best offensive line groups on Saturday.

4) Missed tackles everywhere! Bad angles! There is no question this defense is filled with studs that were ranked 4* and 5* players coming in (and we are talking about rankings that weren't influenced by @gkketch ). But the one thing that can equalize talent is poor technique. The Florida defense showed it on this play as they took poor angles to the deceiving fast Bowling Green running back and then couldn't tackle him in the open field. Imagine if it had been Trey Williams! The Aggie running backs could make the Gator defense look silly.

In Part 2 later this week, we'll show you another play where the Florida defense still was being overly-aggressive with their technique and how Bowling Green took advantage for 10 yard gains at a time. It's a simple play that Texas A&M should run a lot of on Saturday to keep the Gators and their defense in check for most of the game.