THE TAILGATE: A Graphical Preview of Texas A&M vs. Florida

There's a few things I know about life: water is wet, women don't poop, and college football game previews suck. Well not today my friends! I'd like to formally introduce you to a new, one stop shop for all you've ever wanted to know about the American-style football team that the Ags are point-fighting this Saturday. I think we can all agree that the start of the season is way overdue, so it's time to have a nice, long statgasm together.

Share All sharing options for: THE TAILGATE: A Graphical Preview of Texas A&M vs. Florida 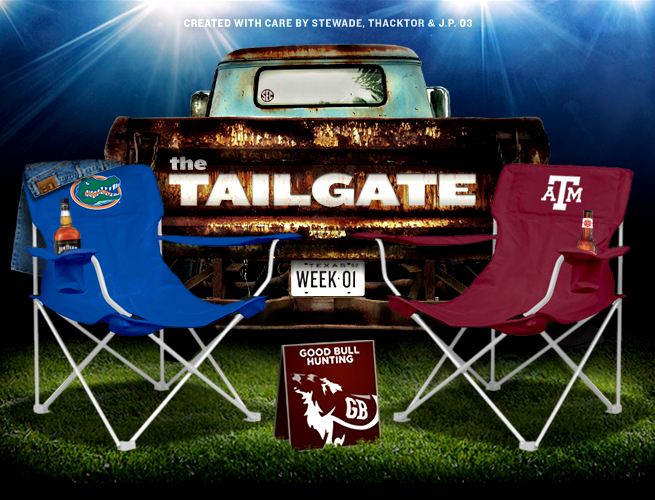 LEAVE THE APOCALYPSE
AT HOME, FLORIDA

So here we are, one week removed from Hurricane Isaac ruining all of our weeks in the worst way possible...well, you know, except for all the people actually affected by the hurricane. Now we begin the 12 week death march that is the Aggies' 2012 schedule. Being new to the conference, there will be a smack talk learning curve to overcome, that's why I'm starting this column: "Thacktor's Uninformed Smack." This is where I will make baseless claims about our opponents all from the first page of Google's search results and my preconceived notions about all said programs. Pretty solid premise, I know. We're so damn creative.

The most wildass news in the country comes from America's unit, also called the sunshine state. You have cloudless lightning, stingray assassins, the zombie apocalypse and Tim Tebow. Those are just off the top of my head at this point. There are at least 10 "Florida!" stories per month, and I feel like that's conservative. I set the over/under of Floridaesque stories coming out of College Station this weekend at 5, and I'll take the over. Welcome to Kyle Field, Gators. Please leave the apocalypse at home.

You may have read about a billboard that was put up in Gainsville this week by someone other than Texas A&M University. I don't know who did this crap, but it's embarrassing. The school didn't have a part of it, so I'm blaming everyone else. UT? Yup. Baylor? Of course. Texas Tech? They can't read, but sure. Obama? In on it. Romney? Paid for it. Mushcamp? Sip defector. Bush II? Sip fan, decider. To all these people, A&M finally has marketing under control. Stop "helping." Now.

Google notes: They have a starting QB now after he eviscerated the mighty Bowling Green State University Falcons at home to the tune of 27-14. This causes less anxiety in Aggieland as we open with SEC play on Saturday, but not much. Have you seen the schedule? Sweet s*** this is going to be a rough year. Rough but fun, like Sumlin likes it. Sumlin doesn't believe in safe words.

Wikipedia notes: The Gators are obviously a storied football program with a recent history of flat kicking ass. This all changed when Urban Meyer "retired" so he could coach in Ohio (coincidentally second place among wildass news producing states. Upgrade in living conditions? Debatable.) What I didn't know was how damn dapper the 1907 team was. Those guys would have gotten lifeboats on the Titanic dressed like that. This is the part where I get a nasty e-mail from a 1907 Gators' family, telling me the the man didn't survive and gave up his seat in a lifeboat to a little girl holding a basket of puppies in 1912. I'm so insensitive.

Prediction: Ags 37 - Gators 21. ESPN covers this by showing pictures of shirtless Tebow sexy-praying alongside ads for the LHN.

Pressure /preh-SHUR/ (noun): Starting your first game as a freshman quarterback in front of 90,000 on national TV during College Gameday in the first SEC game of all time. He’s about to grab you by the eyeballs and never let go.

Saturday will mark the damn beginning of the Kevin Sumlin era, easily the damn most anticipated coaching debut since He-Who-Shant-Be-Named in 2003. Coach, if you win one damn game, can you make it this damn game? Thanks.

#6 Jeff With the Legs, Quarterback. Probably.

Can you do a Lou Holtz impression? Yes? Great. Let’s play a game. Ok, start Lou Holtzing around, and I’ll throw out a few words for you to repeat: Driskel. Brissett. Gillislee. And now you know why I avoided College Football Final.

Petey Pablo, eat your heart out. One stark contrast that separates us from the rest of our new SEC brethren is that our fans don't wave pom-poms, er…shakers. At Texas A&M, we've upgraded to the 12th Man Towel, a fan accessory that is equal parts intimidating and utilitarian. When you've been standing up for 3 hours in 100-degree heat, can you wipe the sweat off your face with a pom-pom? I didn't think so. As an added bonus, you can then fling that very same sweat on everyone around you when you resume spinning your towel around your head like a helicopter.

Gator fans: If you think you've got it bad, just wait till you get a load of our painted overalls! Think of them as jorts with shoulder straps that feature hand-painted lists of our traditions on them for your learning convenience. That's right, I said LEARNING, not touching. If you happen to see a girl with "hump it" strategically sprawled across her backside, she's trying to educate you, not mate with you. The more you know….

For the last time, people: we had NOTHING to do with that atrocious billboard in Gainesville. I mean seriously, "Aggie Nation?" No one around here talks like that. But in case any others pop up, here are some phrases that are also not associated with A&M that should tip you off about their authenticity: "We are Texas A&M," "Rise Up," and more recently, "Call your local provider!"

"I'm Asian." Two simple words on a handwritten sign and just like that he's an internet sensation. Will the tradition continue this weekend? According to Spring 2012 data, there are almost 2,000 Asian students on campus at Texas A&M, so I like our chances. 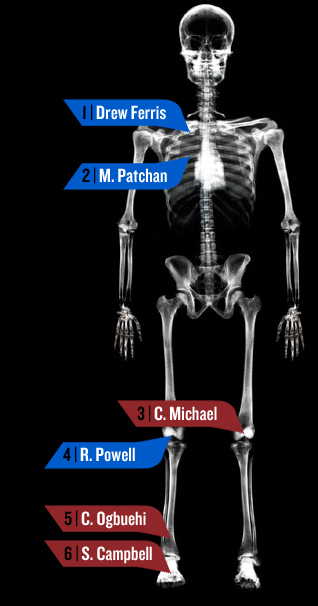 Broke clavicle vs. Bowling Green. Ouch, dude. If a MAC team breaks your bone, did it really happen? Yes, and I bet it hurt. Sucks, dude.

Strained pectoral. I’d like to mock this injury, but I just did a doorframe pushup because I'm manly and it caused me pain. Get better. Just do it next week.

Michael spent the entire offseason intimidating his ACL into recovery. It seems to have worked.

Torn ACL. Recovery would speed up if you could yell at your knee like C-Mike. Bummer, man.

Ced has been is das boot for a bit letting his ankle recover. Put cleats on the boot, let's do this.

Seems the foot is still bothering him. Campbell is now playing "Baby Mozart" to his foot at night to help its recovery, make it read at a sophomore level. 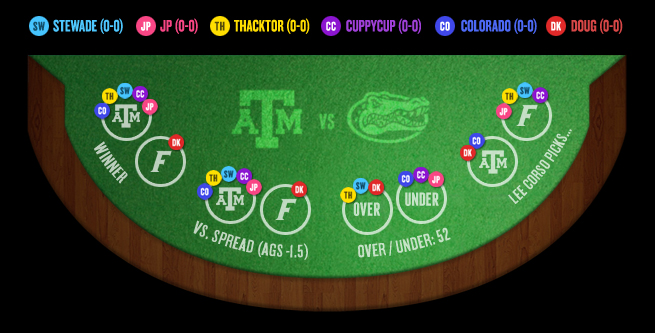 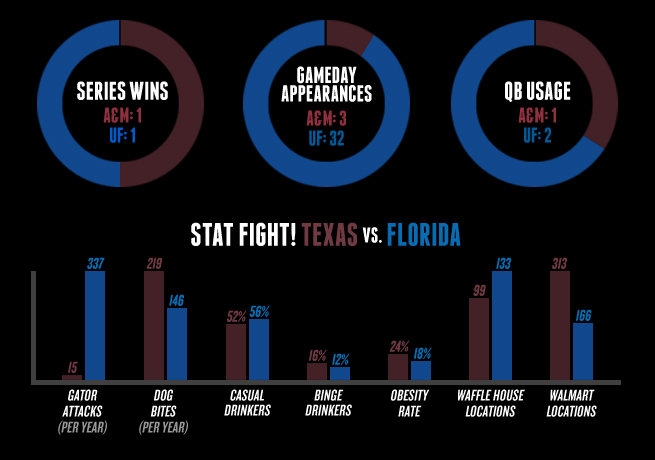 IN ANY EVENT: CZECH IT OUT!

Planning the postgame is a touchy subject. Laura Miller almost got herself hung when she did it. So don’t worry, we’ve got you covered.

I know of only one way to commemorate the first win of the Kevin Sumlin era: by dancing a celebratory polka at the 28th Annual Kolache Festival. Saddle up and head west on 21 until you run head-first into a Czech settlement that really just looks like the side of a road in Bryan. But after standing and yelling in the heat for 3 hours, I think we can agree you owe it to yourself to “lend your soul to the fulfillment of the Czech cultural heritage.” So grab a couple beers, double-fist-taunt an old lady trying to cross the street, and join the fun. Because you know what? It’s what Kevin Sumlin, and these ladies, would want you to do.

A game as big as this guarantees the loss to be that much more soul-crushing, so you’re gonna need some options here. Are you a drinker? Then feel free to masquerade as a tourist at the New Republic Brewing Company’s Brew Tour at 6pm. I’ve been told wandering off is highly encouraged. Are you a hitter? Great! The City of College Station is holding adult volleyball sign-ups until the 14th. Bump, set, and spike your way to a healthier, happier you. Are you a loner? Do you stop wearing maroon for a couple days in protest? Then I’ll see YOU at the Catalena Hatters ribbon-cutting ceremony on Tuesday. Grab a 10-gallon hat and pull it down to cover your shame. Your ugly, Aggie shame.

Since ties were eliminated in 1996, this would be as rare as someone standing in 100-degree heat for however long it would take for them to declare the game a tie, and then getting up the next morning and saying to himself, "You know what, I’m in the mood for some hardcore poetry." But if that’s you, then you are in LUCK. Art979 is holding a Poetry Slam on Sunday evening with celebrated poetry slammer Chuck Taylor. Maybe I'm old fashioned, but I like my football games tied, and my poetry slammed.

Brent Pease on Texas A&M: "They’re into it and they get their little yell people going and all the kissing going on if they’re scoring."

Texas A&M is guy who moves into new neighborhood, mows lawn with shirt off, hits on neighbor wives, tells you his car is nicer than yours.

What to expect this weekend? Late hits on A&M's QB, Kevin Sumlin looking confused, and pain (lots of pain).

Evil genius of the Florida offense: putting as little on tape for opponents to review, forever. Can't prepare for what doesn't exist.

My second son was born this morning in just enough time to enjoy college gameday at Kyle field. Excellent planning on his part.