Share All sharing options for: Breaking Down the Florida Gator Run Game

Okay Ags, it's finally game week and Texas A&M will play the Florida Gators on Saturday as long as there is no drizzle of rain in the forecast. That means it's time to talk real, actual football. How will we quench your thirst? Grab a cold one as we break down a play from Florida's unimpressive win over Bowling Green in which Gator RB Mike Gillislee broke a long run in the second quarter to give Florida a 14-7 lead.

First as we begin to break down this play, let's get a set up of what is going on and a couple of other facts you need to know out of the way.

First, new Florida Offensive Coordinator Brent Pease is supposed to be some type of offensive "expert" and "god" after being released from the wings of Chris Peterson. The genius has so dictated that on first and second downs, Florida will come out in a two tight set (meaning two of some combination of tight ends, H-backs, or fullbacks playing at the line of scrimmage) and either run the ball or run some type of play action or bootleg. The only time you'll see Florida go with a spread look is on third down or obvious passing situations as they don't want either of their quarterbacks attempting a pass unless they have to. In the play below, you'll see this two-tight formation.

Second, the virtuoso Pease also loves motions and shifting of his offensive formations pre-snap. In the play we look at below, the Gators come out in an ace formation (one tight end on each side of the line) with the wide receivers to the left of the formation. Pretty standard look to which the Bowling Green defense lines up to. Then, surprise! We tricked you! We are switching our formation! Florida goes from their ace formation to a Weak I formation in which the fullback is offset to the weak side (away from the tight end side). Florida will do this constantly. They will come out in one look giving your defense time to line up to that strength, and then switch their formation to cause the defense to become out of balance, out of their own strength, and just out of whack. Just another way to give them an advantage.

Okay, lets stop messing around and get to it. 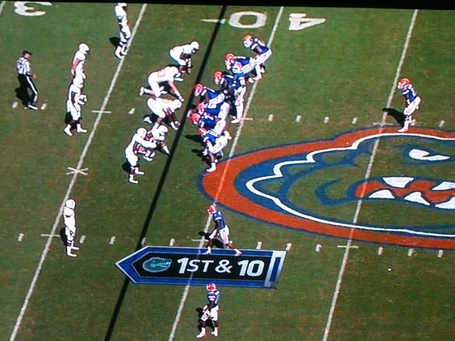 Here is the look Florida gave Bowling Green after breaking the huddle. As we already mentioned, its an ace formation (tight ends on either side of the line) with the wide receivers lined up to the left of the formation. Bowling Green lines up their defense accordingly with a safety actually playing at the line to stop Florida's run game. 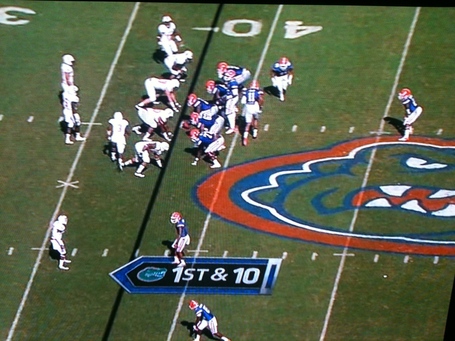 Surprise! We tricked you! We are going in motion to give you another completely different look!

Note that Bowling Green now also is switching up their defensive look due to the Florida motion. 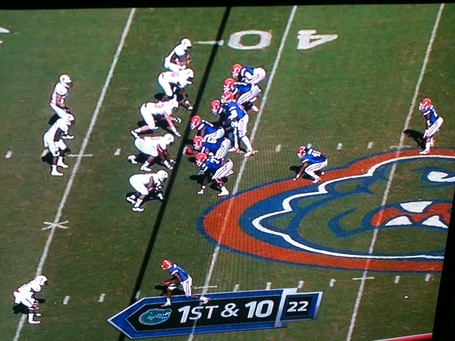 Here is the final look Florida gave pre-snap. It's a simple Weak I formation with the tight end (Jordan Reed) lined up to the right moving over from the left, and the fullback now in the backfield shifted to the weak side after being the tight end on the right side pre-motion. 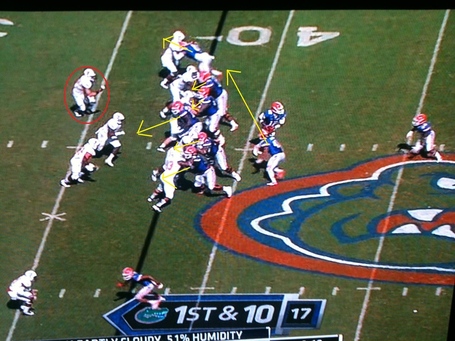 Let's snap the ball. I marked up this play a bit to give you a better understanding of what is going on. Florida will run a simple counter play. The offensive line will down block to the left and try and move the Bowling Green defense that way. Jordan Reed, the tight end, will try and move that linebacker off the line and out of the play. The fullback will then look to kick out the defensive end on the right and the running back, Mike Gillislee, will try to run right between the right tackle blocking down and the fullback kicking out the defensive end. I highlighted the Bowling Green linebacker in red because he will be key in this play. 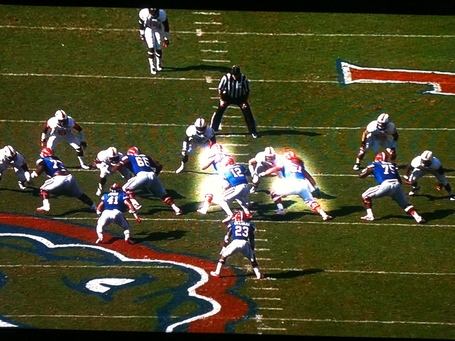 Here is the play as you would have seen it from the endzone. I want to point out these two key blocks which are highlighted. The center, since he is uncovered, is going to move up to the second level and block the middle linebacker. This is key as he would have the potential to stop the play as Mike Gillislee makes his counter cut. The second block is the right guard blocking down on the defensive tackle. This is key as he too could shoot through the line and blow up the play in the backfield. If that block isn't successful, the play is dead. 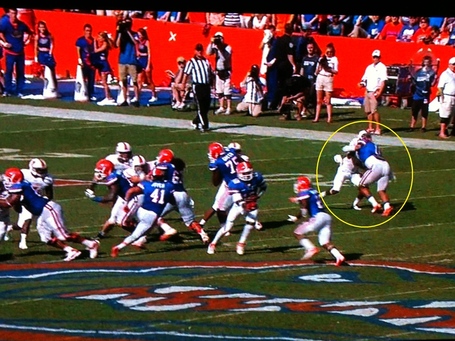 The other key block in this whole play is tight end Jordan Reed completely dominating the linebacker that was lined up over him. Reed takes his guy completely out of the play and will be a non-factor. Because of this block, the play will go for a touchdown. 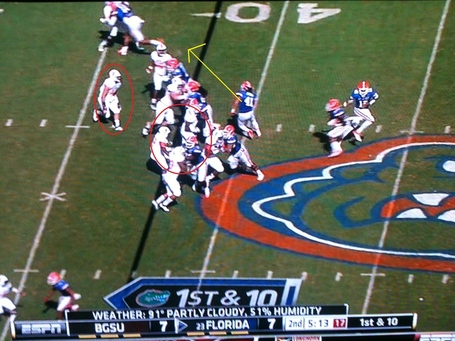 Lets fast forward this play a couple of milliseconds. The offensive line has down blocked effectively, highlighted by the two linebackers in the red circle in the middle of the frame. They are caught up in a clusterfuck of bodies and will now be taken out of the play. The Gator offensive line has done its job here. However, the second linebacker we have highlighted in red actually is free and will be able to make the play. He will have to read this play correctly and go to the right hole. Let's see if he does and we will show you why he is free in a second. 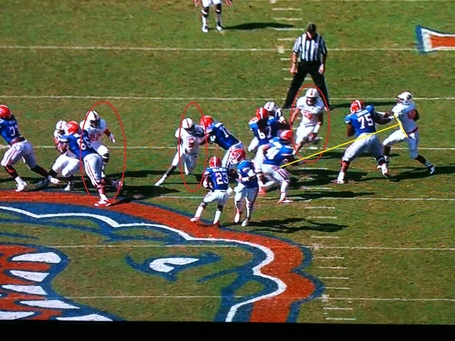 Here is the same time point from behind the line of scrimmage. Notice the effective down blocks. Now, lets look at #75 for Florida, the right tackle. He actually almost fucks this play up royally. His job was to leave the defensive end free for the fullback to kick out and down block our linebacker highlighted in red. Instead, he is dicking around with the defensive end and his linebacker will be in position to make the play. Let's see what happens. 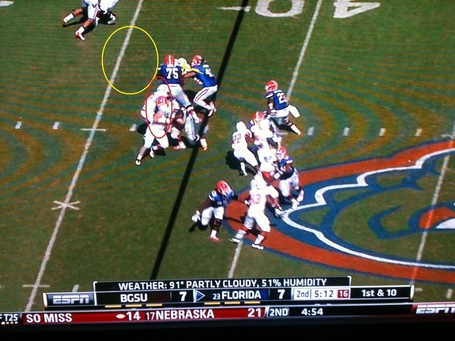 Here is where Mike Gillislee works his magic and the play goes bad for Bowling Green. Our linebacker friend highlighted in red has actually made the correct read on this play and filled the right hole. He is right between the offensive line and the fullback who is now kicking out the defensive end. But, Gillislee isn't running through that hole. He sees the green field highlighted in yellow. And, since Jordan Reed has taken his linebacker basically to the sideline after complete domination, Gillislee wiggles and our linebacker isn't able to make the play. 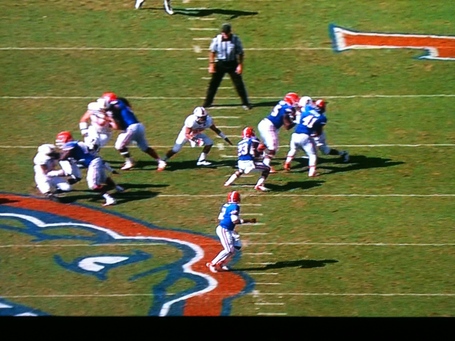 Here is the wiggle to make the linebacker miss 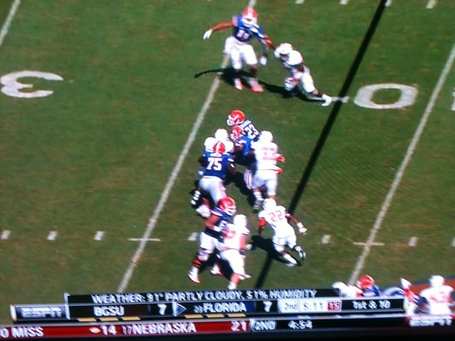 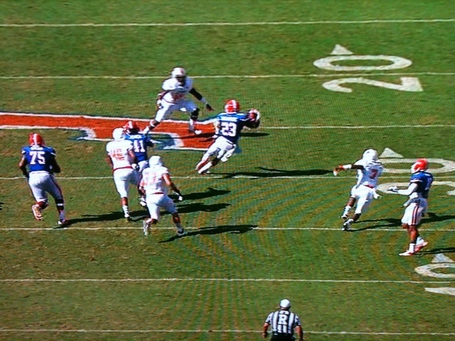 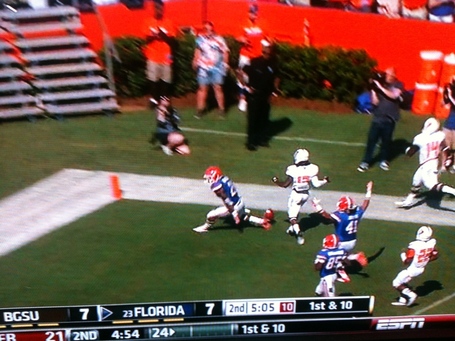 And it's to the house. Touchdown Gata!

So what is the larger picture here? Well, a few things.

1) We have to be ready for the two-tight sets. That is all Florida ran all day. Its a little bit of a worry because our defense hasn't really practiced all fall against this type of offense. It's a big adjustment to go from a spread out attack to this classic power run look.

2) Florida will run plenty of pre-snap motions. We have to be smart enough to get our defense in the right position after the motion. If Florida changes the strength of their formation and catches you out of position, it could be a big play for them like we saw with this counter play.

3) Texas A&M will have to be able to beat one on one blocks. There were two blocks that were key in this play. One was the down block by the right guard on the defensive tackle. A quicker Spencer Nealy or Jonathan Mathis at defensive tackle for A&M might be able to shed this block by staying low and firing off the ball to make the play on Gillislee in the backfield. The second was the complete ownage by Jordan Reed on the linebacker which was lined up over him. Reed is a great blocker to go along with being a good receiver. Our linebacker can't get beat one on one and be taken out of plays. Just can't happen. You have to think Sean Porter would have played that block differently and then the whole play would have turned into a minimum gain.

4) Gillislee is shifty and can make things happen in the hole. We can't stand around and left him juke us out of our shoes and changing where the play is supposed to go. Or juke us in the open field like that safety giving up the long touchdown. We have to be aggressive and go get him instead of letting him come to us and in consequence, miss him.

We've played the run well as a defense before. Florida isn't going anything tricky here. Its a simple counter play. The only trick is the pre-snap motion that changes the formation. But that can be canceled out by a prepared defense that knows what to look for. We just can't get beat one on one and we have to get off our blocks. We do that and not let Gillislee show off his wiggle and we can stuff this Florida run game.

Later in the week, we will take a look at two separate instances in which Texas A&M can take advantage of Florida. One on offense against the mighty Florida defense, and one on special teams. Til next time, gents.