As the Aggies prepare to face Arkansas tomorrow, one of my big keys of game is 3rd down conversions. Keep the offense on the field and Tyler Wilson off it. Here we take a look at how Johnny Manziel needs continued improvement in the passing game to keep moving the chains.

Earlier in the week we talked about how the running game needs to improve for Texas A&M. Now, I want to shift our focus to the passing game and the play of Johnny Manziel. Manziel's raw passing numbers have been fantastic through three games: 67.5% completion percentage, 641 yards, 7 touchdowns, and 0 interceptions. Who could complain about that? But I'm here to tell you that Manziel needs to show continued improvement throwing the football and trusting the play designed by Kliff Kingsbury.

Let's look at another play from Texas A&M's opening drive of the game against South Carolina State last Saturday. If you remember, this drive ended in a punt. The third down before that? Ended in sack of Johnny Manziel. But that third down play should have been converted; the play was wide open and Johnny decided to tuck the ball and run instead of throwing it to an open Uzoma Nwachukwu. If the Aggies plan to beat Arkansas tomorrow and claim their first SEC victory, these are the types of plays that will need to be converted. Let's break it down. 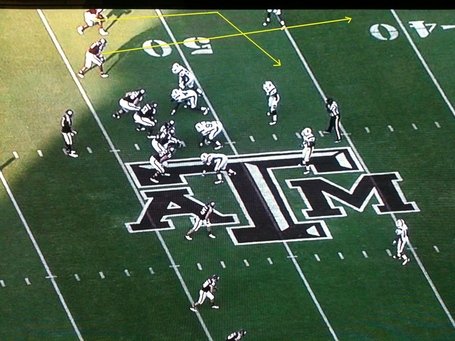 So here is the set up on this play. We have a 3rd down and 5 from our own 48 yard line. We decide to come out in a 5 wide receiver passing set. South Carolina State will play this formation in a nickel package look with four down lineman, two linebackers, and nickelback to the right and two safeties over the top. To the play side (left and marked), there is a corner that is lined up over EZ and a safety (not pictured) that is shaded towards the hash mark over Thomas Johnson in the slot. The route combination to that side will be Thomas Johnson running a go route to pull the corner and safety to him. EZ will run a dig towards the middle of the field at the first down marker. Simple concept. 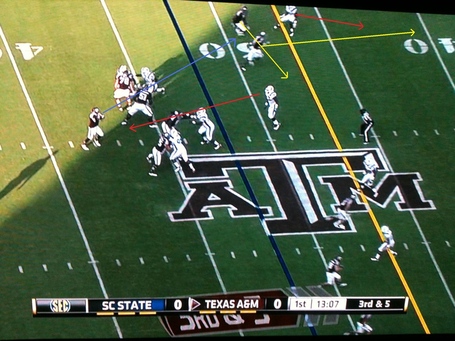 This is what is going on after the snap. Thomas Johnson is streaking up the field pulling the corner to that side with him (red arrow). EZ will run a dig under that, hoping for a clear space right at the first down marker which he will get. Johnny Maziel has read this play nicely after the snap. Look at his eyes (blue arrow). He is looking right at EZ, his first read on the play. At this point, Johnny should be making the decision to release the football since the play will be there. EZ will be open.

But check out the spying linebacker (red arrow). Many teams will deploy this concept to stop Manziel from scrambling. They will leave a linebacker or safety whose sole job is to keep their eyes on Manziel and stop him for a minimal gain in case he decides to work his magic and scramble from the pocket. That is the case here. The pocket around Johnny has formed nicely and Johnny should be able to step up and make the throw to an open Nwachukwu. Should be are the key words here. 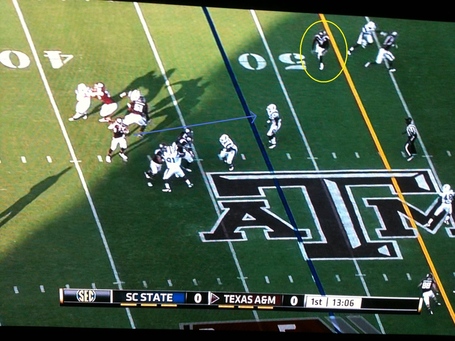 Just one second later, EZ is open. The pass should already be leaving Johnny's hand. Instead, for some reason, he has shifted his eyes to the center of the field and that spying linebacker. At this point, the linebacker isn't a threat. He is playing Johnny 5 yards away and just waiting for him to scramble. Johnny shouldn't even be paying attention to him. 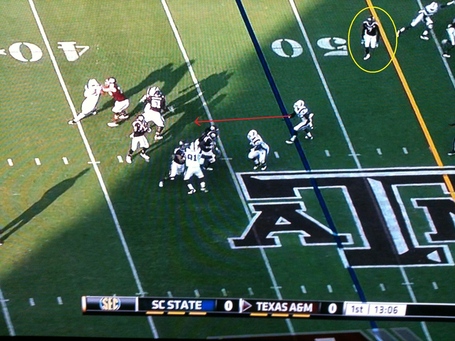 Johnny and the spying linebacker's eyes have met. The linebacker sees the open path to Johnny and begins to step up into it. But there is still an opportunity here for Johnny to throw the football to a completely open EZ who is at the first down marker. There is no one around him! Throw the ball Johnny! 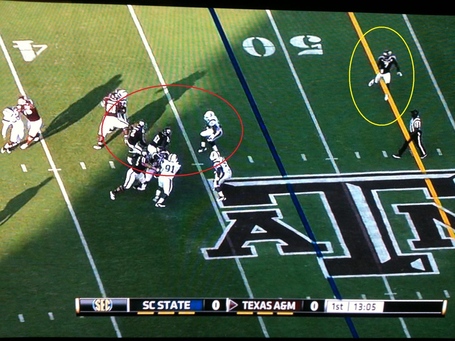 Instead, for whatever reason, Johnny decides to tuck the ball and run. But there is no escaping here. He is in the middle of a closing pocket and the spying linebacker has him covered. 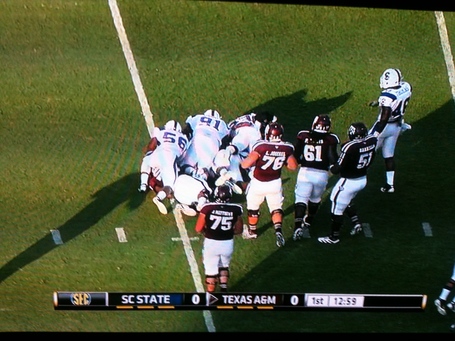 After some running around to save his life, Johnny is finally brought down in the backfield.

This is just another clear example of Johnny needing to show improvement at becoming a passer first and scrambler second. The play was there and he saw it immediately after the snap. He was looking right at it. But instead, he tries to challenge the spy and is sacked for a loss, and we punt on our opening possession of the game. Against Arkansas, these same plays will be there against a horrendous secondary that gave up 400 yards passing last weekend against Rutgers. If Texas A&M plans to win the game, these are the passes we will have to convert to continue driving down the field. Let's hope Manziel shows confidence in his arm and his decision making to make plays down the field in the passing game.