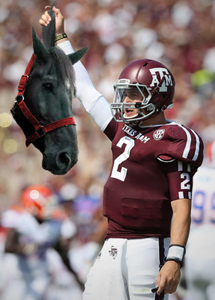 Just like the NFL, fantasy football is, at best, unpredictable. At worst, it's horrifyingly backwards. Since when do the Kevin Kolb-led Cardinals go into Foxborough and beat Tom Brady's Patriots?

Thankfully for us, college football just isn't that insane. Yes, Appalacian State does sometimes beat Michigan, Baylor sometimes beats Sam Houston State, etc, but for the most part, non-conference games are very, very lopsided. My favorite part of that article is this quote by the Atlanta Journal:

"As a general rule, the only thing necessary for a touchdown was to give a Tech back the ball and holler, 'Here he comes' and 'There he goes.'"

For the good guys, the statsitition (that's stats + competition, y'all) won't pick back up until next week when John L. Smith's crazy comes into Kyle Field. So for now, let's review the Fantasy Fallout™ that we witnessed last week on the Gerald Ford Fantasy Field. I've included some subtle foreshadowing on the right.

A defense also earns points for holding teams under a certain yardage and point level, and conversely loses points for giving up a ton of each *cough* SMU *cough*. Sorry. Let's take a look...

Holy Johnny Football! Fun fact: he would have beaten Florida last week by himself. 53 points is a monster day. And even though it's like comparing apples to dumpsters, take a look at the best fantasy performances by an NFL player since 2000. 53 points slots him right in at #2 behind Clinton Portis's ridiculous 218-yard, 5 touchdown game against the Chiefs in 2003. If you recall, JFF pretty much did to SMU what Michael Vick did to the Redskins two years ago on Monday Night Football. Look, it's impressive, ok? That's all I'm saying.

Gilbert, on the other hand…very…Jay Cutlery. Yes, that'll work.

Now 2-0, we must prepare valiantly for the mighty Bulldogs of South Carolina. Oh, State? Oh. Well, just "prepare" then.

Hide your women and calculators, fellas. It's gonna get messy out there.