Von Miller recently tweeted his new threads... I guess when you're the NFL Defensive Rookie of the Year, you can wear what you want and no one is going to say otherwise... 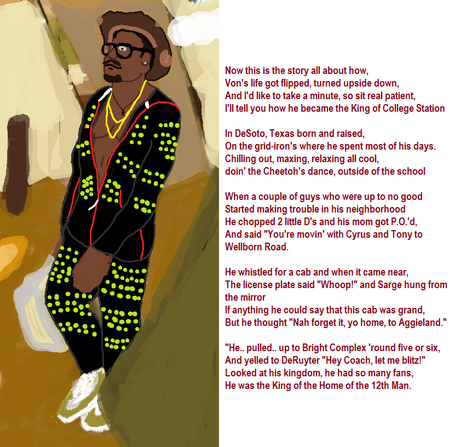 Now this is the story all about how,Von's life got flipped, turned upside down,And I'd like to take a minute, so sit real patient,I'll tell you how he became the King of College StationIn DeSoto, Texas born and raised,On the grid-iron's where he spent most of his days.Chilling out, maxing, relaxing all cool,doin' the Cheetoh's dance, outside of the schoolWhen a couple of guys who were up to no goodStarted making trouble in his neighborhoodHe chopped 2 little D's and his mom got P.O.'d,And said "You're movin' with Cyrus and Tony to Wellborn Road. He whistled for a cab and when it came near,The license plate said "Whoop!" and Sarge hung from the mirrorIf anything he could say that this cab was grand,But he thought "Nah forget it, yo home, to Aggieland.""He.. pulled.. up to Bright Complex 'round five or six,And yelled to DeRuyter "Hey Coach, let me blitz!"Looked at his kingdom, he had so many fans,He was the King of the Home of the 12th Man.