If you're the head coach at Texas A&M, your high school recruiting objectives should look like this:

1. Own Houston. The nation's fourth largest city is in your backyard and should be the focal point of your recruiting efforts.

2. Be #2 in DFW. The Texas Longhorns and Oklahoma Sooners are going to get kids from the Metroplex. You need to be a consensus second place in the region that produces the most D1 talent annually in the country.

3. Take the studs from the Pelican State that LSU doesn't have room for. Per capita, Louisiana is one of the highest talent producing states in the union. The swamp kitties cannot take them all.

Have success with these three objectives and you will have the pipeline necessary to be very successful in the premier college football conference. 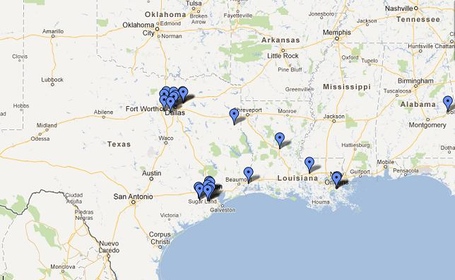 As the current class stands, Sumlin and company have nine guys committed from the greater Houston area. Blue chip wide receiver Derrick Griffin and number one pro-style quarterback in the state, Kohl Stewart, headline the group. The Aggies aren't done in H-town. They are in the final two for the best overall player in Texas, Ricky Seals-Jones from Sealy and are one of the finalist for the best uncommitted offensive lineman, Caleb Benenoch out of Katy. The Aggie staff, led by area recruiter Clarence Mckinney, continue to work top prospects committed elsewhere, as well. DE/OLBs Torrodney Prevot (USC) and Deon Hollins (UCLA) still show interest in the Aggies despite their commitments, with Prevot recently visiting Aggieland for the Florida game.

Moving up to the Metroplex, the Ags have done slightly better by snagging ten commitments. Southlake Carroll signal caller and 5A state champion, Kenny Hill is the highly rated dual-threat quarterback in this class. Top offensive tackle Ishmael Wilson and Cedar Hill speedster Laquvionte Gonzalez are a few other notable players making up the very strong Dallas contingent. The Aggies and Longhorns continue to battle for top honors in Big D but the Ags are still in the hunt for the top defensive tackle and linebacker in Texas. Landing Justin Manning from Dallas Kimball and/or Prestonwood Christian's Mike Mitchell would give the maroon and white the top spot. Area recruiter David Beaty still has his crosshairs set on stud Lancaster DE and Washington commit, Daeshon Hall also.

What pushes this class from good to very good is objective #3, the Louisianimals. Coach Sumlin has gone into the Bayou Bengals' back yard and gotten pledges from four very good players who are arguably all top thirty recruits in the Pelican state. In most years, talents like New Orleans' CB Noel Ellis and Port Allen linebacker Darian Claiborne, would be takes for the Tigers. However Coach Les Miles took six linebackers and four cornerbacks in the 2012 class, reducing the number of available scholarships at those positions in 2013. Inside Linebacker Edward Williams and versatile athlete Shaan Washington, who could play either safety or linebacker in college, can also be counted on to come in and push for early playing time next year. Both positions lose a lot of experience and have questions to be answered in terms of quality depth for the Aggies next year.

Head Coach Kevin Sumlin has had success with this strategy in year number one but hasn't stopped there. He has managed to cherry-pick playmakers like defensive tackle Isaiah Golden,wide receiver Jeremy Tabuyo, and athletes Cameron Echols-Luper and Alex Sezer, from other regions, further strengthening this class. The same can be expected from the Junior College ranks to fill more pressing needs. He's already landed a three-hundred plus pound monster defensive tackle in Robert Zimmerman, a South Carolina native, and won't stop there. The Aggie staff is already scouring the entire country for immediate help at offensive tackle, saftey and linebacker. Where will they come from? Who knows exactly, but at this point, it's icing on the cake.