THE TAILGATE: A Graphical Preview of South Carolina State at Texas A&M

Brace yourselves boys and girls, for Week 3 is upon us. And just because our opponent this week might not be very exciting, don't think for one single solitary second that our content on this blog plans to follow suit. So much to cover this week: Twitter controversies! "Violations of team rules!" Ricky Seals-Jones! Oh yeah, and our half-quarterback, half-touchdown machine is pretty good, too. But my guess is you didn't come here for the intro, so let's get this FCS party started!

Share All sharing options for: THE TAILGATE: A Graphical Preview of South Carolina State at Texas A&M 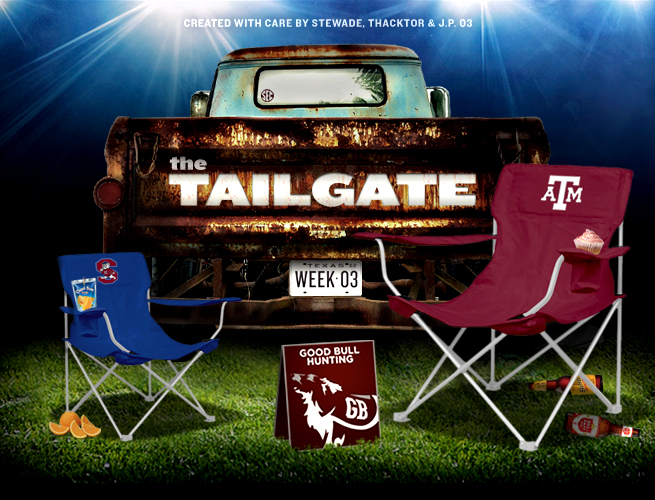 I am an understanding person. I know that last year, Texas A&M switched conferences and, in doing so, really messed with their ability to schedule quality out of conference games. I am also not going to sit here and rip on a small school because they are willing to accept a ton of money to come (please don't make me wrong here, God) get their asses handed to them on the football field. But here's the deal, I'm supposed to get on here and be funny. It's a lot easier to be funny when you're dealing with programs of note, but this isn't going to be that funny. It's going to come off mean if I rip on the school and stupid if I say nothing. I'm in a lose-lose situation here, so for the rest of this column, I'm just gonna riff. Let's make up some stuff and use the internet!

They have balls. Demographically, at 50% men and women, each student has an average of .99 balls. Metaphorically, they're an FCS team playing an SEC school away, each member of the football team has an average of 4.65 balls. There is an entirely separate equipment truck for the football team dedicated to hauling their balls cross-country to away games. The locker room is lovingly referred to as the "ball pit." These players are nuts. It's not going to make one vas deferens on the scoreboard, but you must respect the fortitude. Testicle joke.

They are the bulldogs: Much like two other opponents this year, this mascot is an ugly dog. Get some class and have a fluffy, pretty dog like we do. Also, make the dog more important than any student because that makes sense.

Marching 101 Band: They're good. Seriously, great band. The FTAB's polar opposite, but greatness happens on many levels. I wish they were traveling with the team, could have been really cool to see.

They Will Run The Table: After this game in the MEAC. MEAC also sounds like a cat with bronchitis.

Transparency, they has it: Seriously. These guys hide nothing! Commenters, find absurd numbers and question them.

Ben Folds Five is back! This has nothing to do with football, but their new video is just plain outstanding. Also, a little NSFW language on this one, but I think that this references the Waco tarp. If you can't draw a crowd...

If Marching 101 came with them, I'd give SCSU 14 points. Since they're not, Johnny Football accumulates absurd stats in 2.5 quarters of play, the defense tightens up and the Aggies only commit 15 penalties this week.

You're probably just as tired of seeing JFF on this list as I am trying to come up with quippy quips about him. But can I really take him off? He's already won the Heisman in our hearts.

There are two people in this world that I would never wish to be: the person who has to tell C-Mike that he's suspended for a game, or the first guy who gets in his way this Saturday.

The rewriting began against SMU, and I guarantee you it won’t stop this week.

Division 2. Limited information. He apparently throws the ball, mostly to the defense.

Ok, fine, this guy looks mildly entertaining. I’ll allow you to pay attention to him. BUT HIM ONLY. The rest? NO.

SCSU allowed Rich Rodriguez's Arizona Wildcats to run over 100 plays and gain a whopping 40 first downs in their matchup last weekend. We reached out to Rodriguez for a comment on how his team managed so much success against the Bulldog D and what the Aggies could do to enjoy a similar level of success, but his assistant said he was on the other line with someone from Arkansas and couldn't click over. Weird. Anyway, expect a similar performance from the up-tempo Texas A&M offense on Saturday, minus those pesky delays caused by "cramping" that we saw against Florida.

To paraphrase the great Chotchkie's manager Stan, people can get rumors and speculation anywhere, okay? They come to The Tailgate for the atmosphere and the attitude. Mmm-kay? That's what The Tailgate is about. It's about fun. So don't bother me with "Twitter" this or "doghouse" that. I don't care about last week and who didn't play and why. All I care about is this week and four magical words: "Man, run the ball." And run he will. At least until A&M is up by 30 and they put in Brice Dolezal again.

From time to time, it's important for us to explain to outsiders some of the quirks that make the Aggie fan base unique: why there are certain places on campus where you can't walk on the grass, why a school with 45,000 extremely good-looking students can't seem to keep crotch-grabbing, aviator-wearing dorks in uniform who look like rejected extras from the Top Gun bar scene from being the only ones to appear on TV during our game broadcasts, and how on earth we can find something to be worried about when our QB just put up video game-like offensive numbers and earned SEC Freshman of the Week honors in only his second collegiate start. We should be ecstatic and off-the-charts-optimistic for the future, right? Well…unfortunately, no team has snatched cruel defeat from the jaws of victory over the last decade more than our beloved Aggies, which is why you can't blame us for foregoing a premature celebration after the SMU game and instead waiting for the inevitable letdown. If Texas A&M ever finds itself up by 40 with eight seconds to go in the national championship game, don’t be shocked to see a large contingent of fans huddled in the corner of the stands praying that our quarterback doesn't break his leg trying to take a knee, resulting in a defensive fumble recovery return that somehow earns the opposing team a previously unheard-of 42-point touchdown. Here: Watch this video clip. Charlie Brown plays the role of Aggie sports fans to perfection, and for now, we're all still hoping that Johnny Manziel doesn't turn out to be our proverbial signed document.

Perhaps you heard the big off-the-field news this week that Sealy WR Ricky Seals-Jones has eliminated Texas from his list of finalists and will most likely sign with either Texas A&M or LSU in February. Unless you only get your recruiting news from Texas-centric sites, in which case you heard that Mack Brown has once again exercised his pristine integrity and decided to withdraw from the race for his coveted signature. Which wouldn't be a problem, I suppose, if RSJ hadn't been deemed talented, family-oriented, and high-character enough to have earned an offer from (and committed to!) Texas just a few short weeks ago. Most schools would chalk this up to a fickle teenager changing his mind as they are all prone to do, but Mack has a reputation to protect. So the reason that leaks out of Austin is that Seals-Jones obviously must have hired a street agent, because money is clearly the only thing that could possibly lead him to decommit from a team in a dead-end, regional conference with a gimmick offense and comatose fans that plays its games on a TV network no one can see. I'm as confused as everyone else, so I put together this handy chart to help us keep track of the spin coming out of Austin these days: 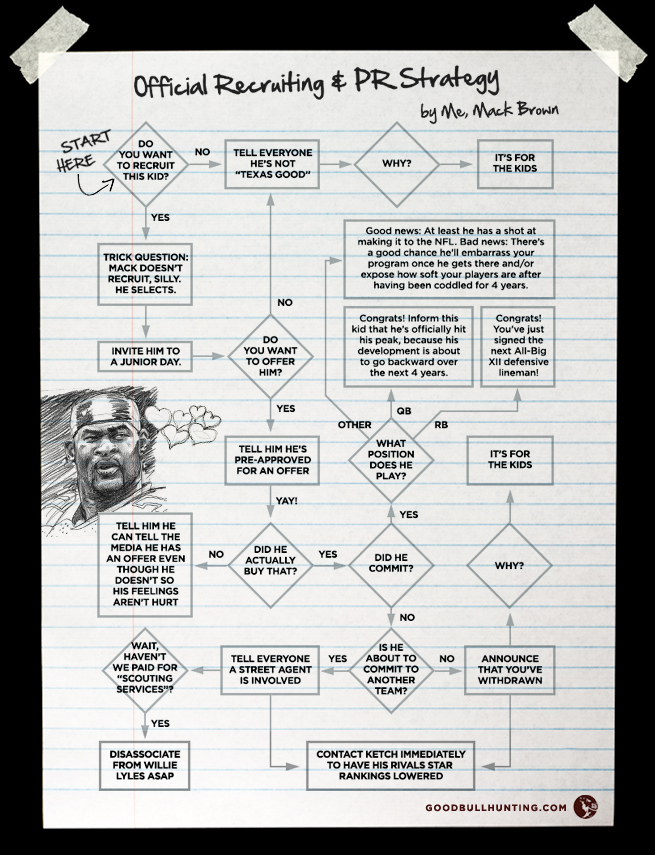 OFF THE WOOD: INJURY FREE! 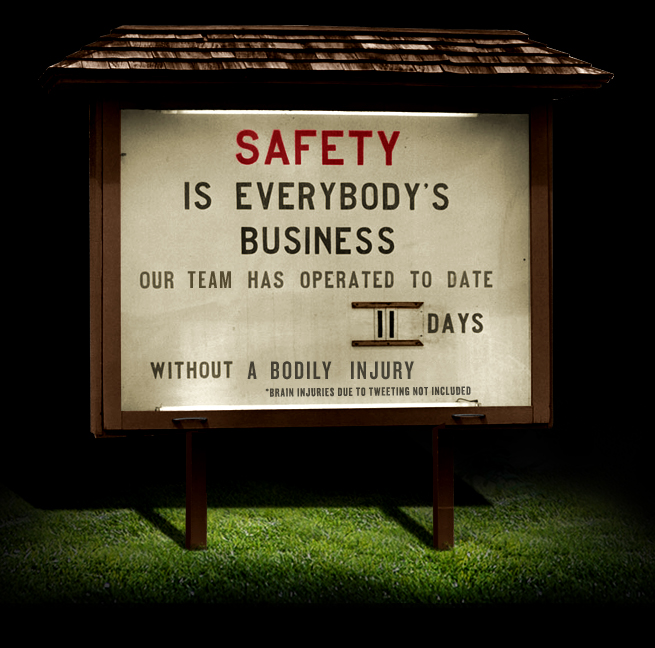 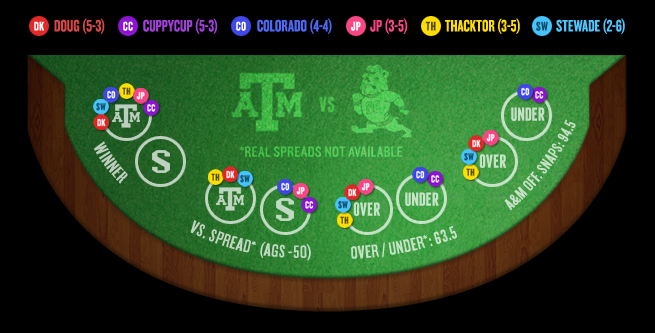 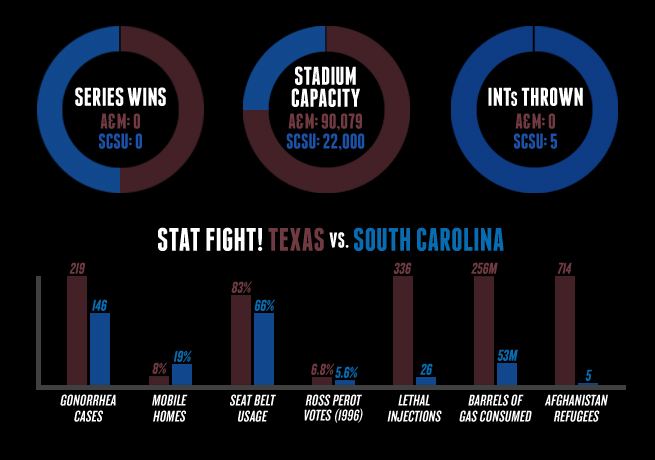 Planning the post-party ahead of time is a pretty bad ide...who am I kidding here? You don’t need options. Head to the Chicken after Manziel is benched to celebrate our half-victory. 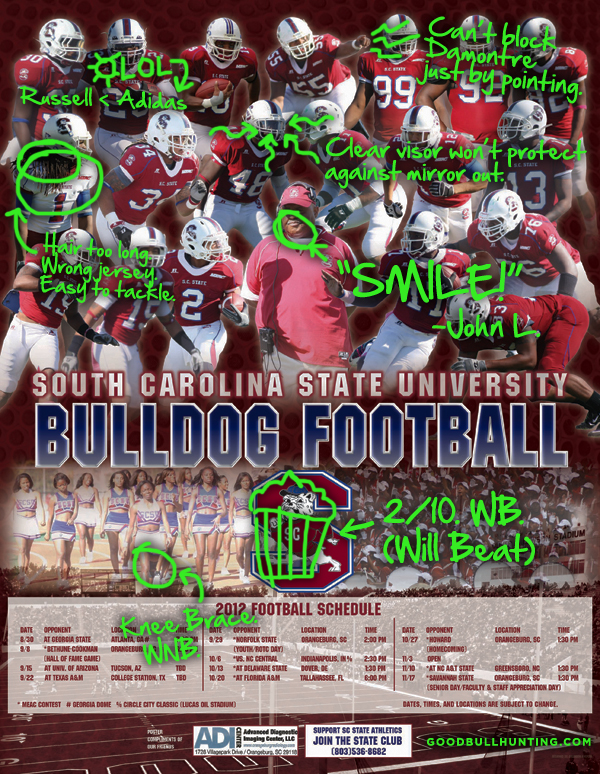 #SCSU Do you REALLY know the differnce between Business Casual and Business Professional?? CHECK OUT THIS FLYER!

If anyone sees or know Derrick Joiner, tell him that i found his id!!#SCSU