This week, the research was a little tougher. The Bulldogs do have a draft prospect in safety and Georgia transfer Jakar Hamilton, and that caught my eye at first. But I wanted to dig a little bit deeper than the obvious. The South Carolina State Media Guide proved to be a very valuable resource.

The Bulldogs’ offense has not been spectacular so far this season. And throwing out the Arizona game, it seems as though the defense is their strongest unit, especially their secondary. But it’s the guy that anchors their front seven that caught my eye and became That Guy.

The Bulldogs lost one of their all-time great defenders in middle linebacker Donovan Richard to graduation last year. At one point, he was signed as a free agent by the Jacksonville Jaguars. Richard was a consistent All-MEAC performer and led the team in tackles last year.

Second on the team was Joe Thomas, who, after playing a backup/special teams role in 2010 as a freshman, joined Richard in the starting lineup as the WLB last year due to his speed. All he did was rack up 100 tackles, 5 TFL, 3 sacks, and a team-leading 3 interceptions. Over the off-season he bulked up to around 230 (without really losing a step) and so far has continued his playmaking abilities this year with 25 tackles, 3 TFL, 1 sack, and 1 forced fumble through the first three games, including 9 stops against Arizona. 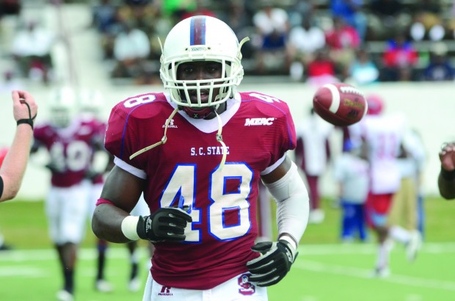 Thomas will make some key plays, yet he probably won’t affect the outcome of the game on Saturday. But if we build a substantial lead and turn to the running game in the second half, you can be reasonably sure that even Dave South will learn the name of That Guy if you happen to be listening on the radio. It could be a very interesting duel between Christine Michael, Ben Malena, and Trey Williams versus That Guy for much of the night.