The Gators opened up against Bowling Green on Saturday without a decided starter at QB. After the game, an unimpressive 27-14 win, Coach Will Muschamp claimed that there was still no clear front-runner. Either he is extremely demanding and picky, or this is an attempt at gamesmanship, because it was clear that Jeff Driskel had the confidence of the offensive staff against Bowling Green. Not only did he receive the vast majority of the offensive snaps (52 out of 63), but he led the Gators to 20 of their 27 points. On the other hand, it was fairly obvious that Jacoby Brissett did not get nearly as much playing time as he was promised. This is the inherent risk involved with attempting to platoon quarterbacks by quarter. Muschamp (correctly) did not pull Driskel when he was in the midst of a drive at the end of the first quarter, so he ended up playing well into the second.

This is a little curious. With a Charlie Weis or a Steve Addazio as a coordinator, you knew that the Florida offense was going to underperform. But Brent Pease is the antithesis of the recycled has-been. He's a Chris Peterson disciple and no doubt has some very good ideas about changing the offensive culture in Gainesville. The sad fact is that Muschamp has been beaten down so much lately with offensive woes that he's probably reluctant to completely relinquish control to Pease at this point. This is understandable, and it also favors us slightly. We'll need all the uncertainty we can get on the opposite sideline on Saturday. 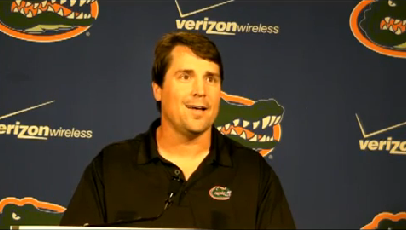 Star Wars? Our QBs ain't that famous yet.

The dual QB system can work. Florida won a national title in 2006 splitting time between Chris Leak and Tim Tebow. That was a much different scenario, though. Leak was the established team leader: a long-time starter who had the confidence of the staff and his teammates. Tebow was an incredible young talent who was too good to keep off the field. Each player knew that he needed the other. One was a senior and one was the freshman heir-apparent to the keys to the program. They had complementary skill sets. It worked.

Driskel and Brissett, on the other hand, are a different story. Both are sophomores who have very similar abilities, strengths, and weaknesses. The longer there is uncertainty between them, the more difficult it will be for one or the other to gain the complete trust of the rest of the offensive players. And while it may seem like a transparent move by Muschamp to obfuscate our preparation, it is still shrewd in that we cannot assume it is Driskel yet. He and Brent Pease may really want to see more of Brissett in a hostile environment before making their decision. It’s difficult to say one way or another whether or not a starter will be named this week. On one hand, it would lend some needed solidarity to the Florida offense. On the other, it would give Mark Snyder that much more time to prepare for a specific player. With Muschamp, my guess is that he leaves it open-ended.

If there is one area of stability in this offense, it is at running back. Senior Mike Gillislee is the real deal. He has quietly amassed over 1,000 career rushing yards while backing up the likes of Chris Rainey and Jeff Demps over the past three years. He’s built a little more solidly than the Florida tailbacks of late: he’s 5’11", 210lbs and is not afraid to run between the tackles, but he still has the speed to break a big run outside. He is a patient runner; a team player who has been waiting for his chance as a starter, and he took full advantage Saturday with 24 carries for 148 yards and 2 touchdowns. He put the team on his back in the first half, and it was just enough to carry them through the rest of the game as the passing game sputtered. With an experienced offensive line (4 of 5 starters are upperclassmen), this Florida run game will more closely resemble a typical SEC rushing attack than the Florida teams in recent memory that featured a quick, slashing type of runner.

So what can we expect when GameDay rolls into town? Probably a healthy dose of Gillislee as the Gators try to establish the running game. How well Mark Snyder is able to adjust and stop them will determine who we’ll see more of at quarterback between Driskel and Brissett. But the fact that there are still two potential quarterbacks makes Snyder’s job that much more difficult, especially since he has not seen his own team play yet this season. It’s a clever move by Muschamp and it should be interesting to watch how it unfolds.