Share All sharing options for: Breaking Down Manziel's First Touchdown Pass Against SMU

Saturday was Johnny Manziel's coming out party for all of college football. Against SMU, Manziel finished with 294 yards passing and 4 touchdowns to go along with 124 yards on the ground and two scores earning him SEC Freshman of the Week honors. There were a lot of great plays Johnny made on Saturday, but it was his first touchdown pass of the game in the second quarter that was his best on the day. And I'm about to show you why.

Johnny Manziel made a lot of great plays on Saturday. He was the human highlight reel on the day. Most of those plays were made with his legs outside of the pocket and somehow throwing across his body down the field to his open receiver. He had most fans screaming NO NO NO JOHNNY NO YES YES YES! But his best play of the day, in my opinion, was not made with his legs. On his first touchdown pass of his career to Ryan Swope (yes, he still plays for us, surprisingly), Johnny made a great pre-snap read and held onto the ball for less than a second, standing tall in the pocket and making an accurate throw down the field that made both Kevin Sumlin and Kliff Kingsbury proud. Lets break it down. 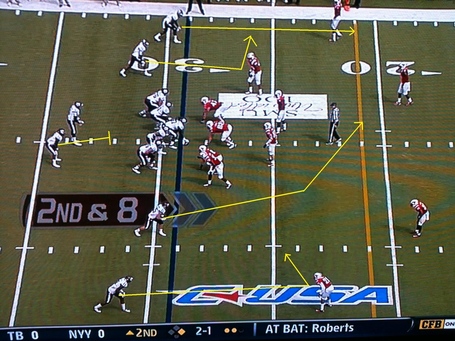 Here is the play that Texas A&M will be running on second and eight at SMU's 28 yard line. It's a classic four wide spread look with Trey Williams in the backfield with Johnny Manziel. The key route we will be focusing on is going to be run by Ryan Swope who is lined up in the slot on the right side on the right hash marks. Every other route really will be meaningless on this play. Ryan will be running a post route that breaks at the 5-6 yard mark towards the middle of the field in between the safeties who are giving a quarters (cover 4) or cover 2 (two deep safeties) look. What we will never know on this play is if this is the route that Ryan was supposed to run when the play was called. What I mean by that is that Swope could have easily adjusted his route after the snap to take advantage of the blitz SMU will be running on this play. This offense gives great freedom to the wide receivers when they run their routes. They will adjust their routes based on the coverage that is being played. For instance, Ryan could have developed his route in several ways. Here, because there is no one directly covering him besides the safety 12 yards off the ball, he might have chosen to run a 5 yard "stick" or "curl" and this play would have been just as effective. In fact, the "stick" concept is a call that is very popular with Kliff Kingsbury. That might have been his assigned route on this play, but due to the blitz by the linebackers, Ryan might have made the decision to attack the middle of the field and Johnny read it with him 100% of the way. Would make a better story, at least, so we will say that is the case.

Just as a fun aside, last year had Ryan Tannehill seen his look by the SMU defense (no one covering Ryan in the slot) he would have directly audibled to the bubble screen and it would have most likely been at least a first down play if not more as well. 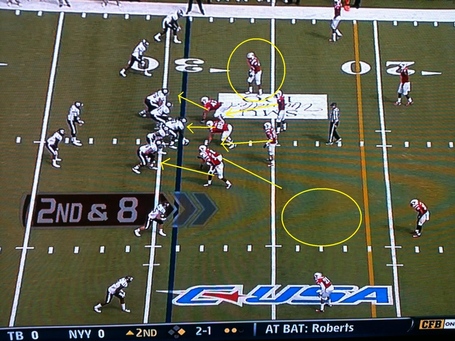 Here is the play that Ryan Swope will be taking advantage of. SMU is lining up in their base 3-4 defense. They love to zone blitz like the Pittsburgh Steelers and that is exactly what they do on this play. The nose tackle and the left defensive end will be rushing the field along with the right outside linebacker. The extra blitzers will be the two middle linebackers. To account for these blitzers, the right defensive end in Beau Barnes who goes 6'5" (will be important later) will drop back from his position and desperately try to cover a 1st Team All-SEC wide receiver in the middle of the field. Good luck. 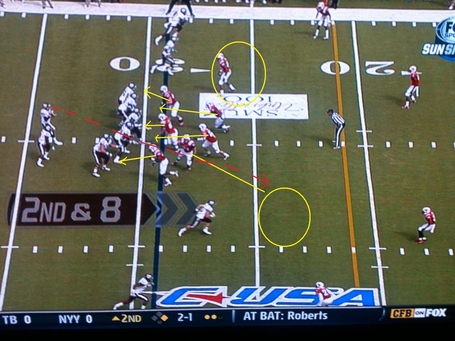 We are looking in this frame directly after the snap of the ball. We can see the blitz coming by the linebackers and the defensive end trying to get to his coverage spot in the middle of the field. Look how far Ryan Swope is already up the field: 3 yards while every other receiver is barely crossing the blue line indicating the original line of scrimmage. Young man has some burst off the line. What I wanted to highlight here though is where Johnny Manziel's eyes are -- in the middle of the field recognizing the blitz and towards the spot where Ryan will soon be. This will be a great read by Manziel and a very quick and automatic one at that. He will have complete confidence in what he is seeing, what his receiver will do, and where he will need to throw the ball. A very experienced read by the redshirt freshman QB. 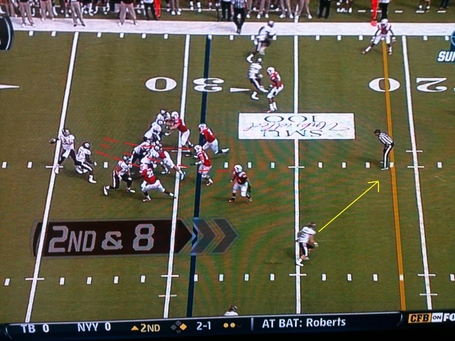 Less than a second into this play, Johnny has already made his read and is about to release the football. Less than a second into the play! That is how well this young man read this play and how much confidence he has in himself. Refreshing to see in a young signal caller. But the SMU defense ain't no slouch. They are well coached, too. Look at the defender's eyes on this play, especially the linebackers. They won't be able to get to the quarterback with their called blitz. They know that. But if you can't get to the quarterback, the next best thing is to put your hands up in the air and bat down the ball. That is what they will do here and something the 6'1" Manziel will have to overcome. 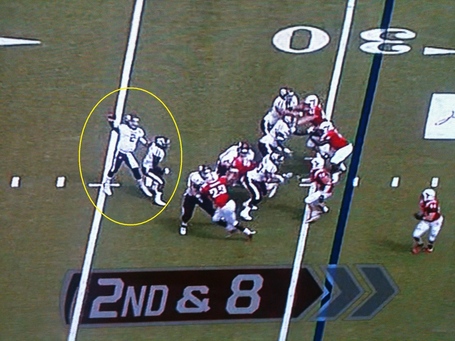 This is a couple of frames forward into Johnny's throwing motion. I want to point out several things here. This is a pretty good throwing motion we are seeing here, compared to those on the run throws we saw most of the day. Johnny has a good stance with his feet underneath him. He is creating a good torque with his torso and is well balanced. 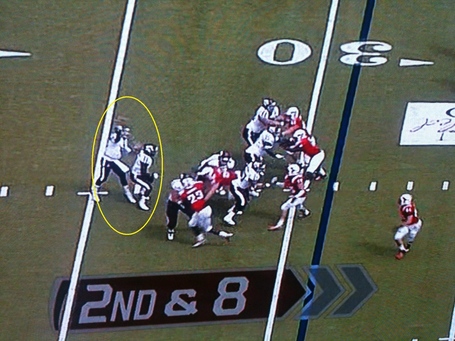 Now check out his release. Look how high it is over his head! For the 6'1" Manziel, this is absolutely necessary to get this ball over the line and the jumping linebackers. It even looks like Johnny is on the balls of his feet to make this throw. He is aware of his height limitations but is making the release point necessary to overcome them. Ryan Tannehill would have had this ball batted down at the line last year. Again, another good impression from the young QB. 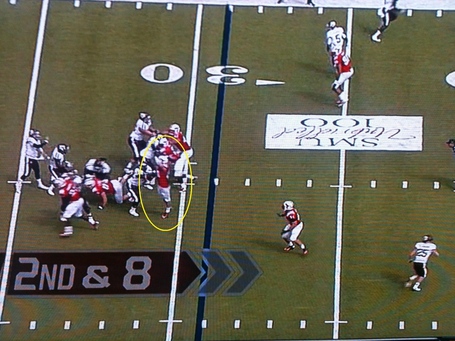 And this is why Johnny had to have the high release point -- to overcome the leaping linebackers at the line of scrimmage. It might be difficult to see on this image but the ball is directly over the hands of the highlighted linebacker. A couple of inches taller (or a few inches lower on the pass) and this ball is deflected at the line and no touchdown on the play. This is where Johnny's release point makes this play. 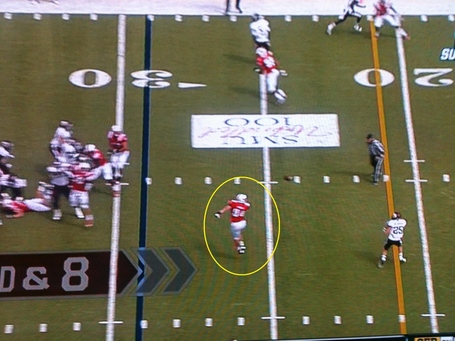 And the ball also gets over the 6'5" defensive end who dropped back in coverage. 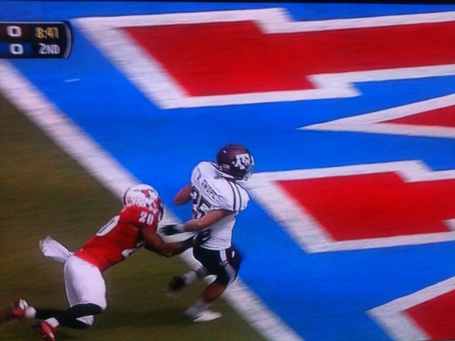 The end result is a catch by Ryan Swope, and some yards after the catch splitting the safeties down the field for the first touchdown pass of Johnny Manziel's young career. Fire up the Fightin' Texas Aggie Band.

So why was this play so impressive? It shows us that Johnny Manziel can be a true quarterback in this offense. From the read he makes at the snap of the ball to fire it into Ryan Swope in the middle of a vacated field that took one second, to his throwing motion, set-up of his feet, and release point high enough to get the ball over leaping defenders, this is one hell of a play. Johnny Manziel can be a very effective quarterback in this offense when he reads the defense quickly and sets his feet to throw, something a lot of people were again questioning after the game.