I have to get something off my chest: my first love was not college football. SORRY GEEZE. Don't get me wrong, I've always loved it, but when I discovered fantasy football, two glorious worlds collided, and it looked a little something like this: 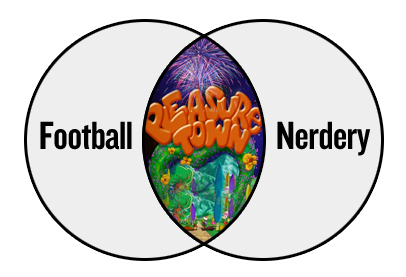 I must admit, though, that I've yet to get into college fantasy football. It takes enough effort to juggle 32 NFL rosters, so adding 120 college teams on top of that would result in a divorce and limited visiting rights to my son.

But two teams a week? Yes, that I can do for you. Let's get down to business.

After realizing that we actually out-gained the Gators during our collective heartbreak, and netted a whopping 8 sacks on Driskell, I was curious to see if our team would have actually won the fantasy football game. Results to come.

If you don't play fantasy football, it's pretty simple to understand: You have a roster just like a normal team (QB, RBs, WRs, etc.). You choose players to fill in each spot on your team, and then are matched up against another team in your league. The score is based solely on individual stats; you get points for passing yards, rushing yards, touchdowns scored, etc. Once the games are all finished, the highest total score wins. Simple nerdery, people.

I actually flirted with the idea of using NFL players for this segment, and then I saw our team:

Spoiler: We're not winning one game with that roster. I think it might also be difficult to field a team for, say, South Carolina State.

So every week, we'll line up the Aggies (Swagger Machine) against their actual opponent. This week it's SMU, and we all know that June Jones refuses to lose the stat war.

But about that game against the Gatuhs…let's take a look at how we would have fared. And just for clarity sake, I picked the players I would used before the game. Obviously Ryan Swope would not have been a great call in this one.

That's right, drink up ladies and gentlemen, we are officially 1-0!

On to SMU. Make no mistake, they may not be difficult to beat on the actual field, but on the fantasy field, they are a juggernaut. Let's set our lineups, cross our calculators, and get it on!