Foundation of Facts: One Cannot Spell Smug Without SMU...

Share All sharing options for: Foundation of Facts: One Cannot Spell Smug Without SMU...

The Aggies debut versus Florida was heavy on the "Close, but no cigar", and a little light on the "We kicked their Gatah asses!". Alas, one of the drawbacks of predicting this year's numbers on last year's stats is ... being, oh so slightly wrong. However, the yardage prediction wasn't THAT far off and who knew that Muschamp would actually make adjustments and inspire his kids at halftime.

Anyways, there's no time to look back, that's not really what we do here - except when looking back at statistics. So there was time for that, but only insomuch that we can now look forward to this week's stats versus SMU (pronounced SMOOOOOOOO!)

Question of the Week: What's worse than using last year's statistics to predict this year's games? (Answer at bottom)

Key to the chart below:

Blue Metric = Top 20 in the Nation

Red Metric = Bottom 20 in the nation

Download: Full Image | PDF (or use the scrollbars below) 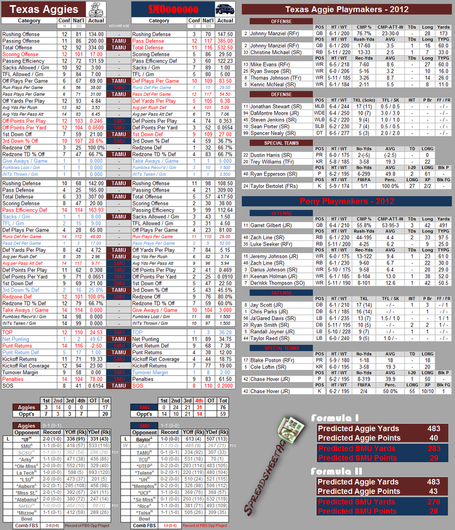 2. Look for A&M's Redshirt Freshman QB Johnny "F'ing Football" Manziel (JFF) to scorch this pass defense. Yeah, he did not gain a lot of yards passing versus Florida. There are lots of plausible reasons: Florida's defense is awesome, it was JFF's first game, receivers not getting open, no play calls down field, conservative play-for-the-win-and-don't-make-mistakes attitude; freshman jitters, knocking the rust off. Well the last time I checked: SMU is no UF, JFF is on game 2, our receivers are really good (really), etc. We should scorch this D, that's all I'm saying.

5. SMU is going to hold onto the ball as long as possible and use Zach "Coke" Line (ZCL) often in rushing and passing. Our goal should be to keep ZCL under 100 yards of total offense. If we can do that, SMU may break 300 yards altogether.

6. It's too bad there is not a metric carried for cramps for and cramps against. We would lead both categories. Our team is so well-conditioned by Larry Jackson and Florida players were sure looking at the sideline alot before falling to the ground and writhing in agony. I wonder if SMU will have similar conditioning problems while looking at the sidelines.

I hope you enjoy this feature and will come back next week to see how the Aggies will fare, statistically, against the SCSU Bulldogs in Game 3. (Geeze, how many southern schools have bulldog mascots?)

Answer to Question of the Week: Using one game's worth of this year's statistics. Ugghhh.