THE TAILGATE: A Graphical Preview of Texas A&M at SMU

University Park, Texas. Home of Southern Methodist University…and me. That's right, you're looking LIVE at a snooty douche who could have worn a sweater draped over his shoulders in high school and fit in just fine. The only difference is that I finally got my life together and headed down south to Aggieland instead of 5 minutes east to the Boulevard, where future commercial real estate brokers were blowing their lawyer dad's hard-earned, family-ignoring money on croakies and polos. Besides, my dad's a doctor, and he loved our family, so SHUT UP. Sorry. Week 2 brings us more than we could ever dream of in terms of material, but please forgive us if we can't stop harping on a few points. Mainly those that rhyme with "dreg shames" or "propane." So let's fire up our collective swaggercopter, shave our throats, and do this thing. Remember, the SMU women like 'em clean, boys. Clean, and swaggery.

Share All sharing options for: THE TAILGATE: A Graphical Preview of Texas A&M at SMU 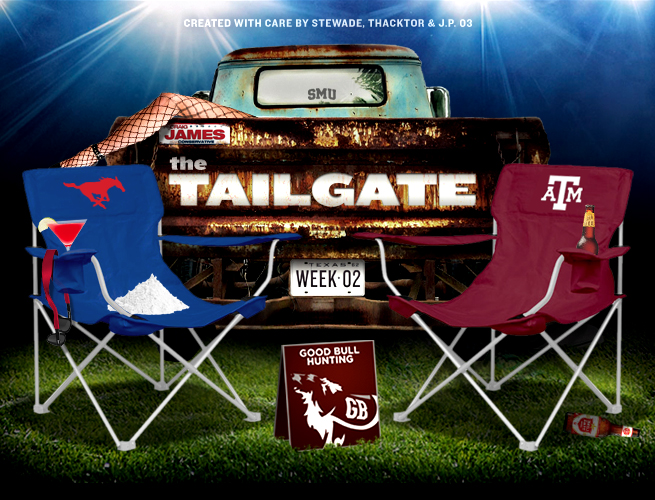 I know I couched this column as a weekly grab bag of uninformed smack talk, but I find myself at a crossroads. I have a lot of love for Southern Methodist University having grown up in Dallas and actually attended grad school there in 2009. Now, that love is only reserved for the faculty and my classmates, and the undergraduate population is something I can only speak tangentially on. That's also never stopped me before. For a school that used to be a national powerhouse, the decades since SMU was thrown into football's gas chamber have lowered the student body's collective football IQ to that of an Eastern European supermodel. "Ball is kick and then boys smash faces, no? You have cocaine?" Whatever, Svetlana. Stop interrupting me.

My first real SMU experience occurred back in 2006 when I was interviewing with the admissions department for...well, admission. I found myself walking the campus and stumbled upon something that I thought only existed in the mythos of frat comedies: the massively entitled sorority girl. Outside the Law Library, a girl between 18-20 was standing (arms folded, one knee locked, the other bent with a hip jutted out to the side. Pout-face is strong, but also angry) across from a meter maid who had booted this poor, innocent girl's brand new BMW 3-series.

The sorority girl was adamant that the woman "didn't know what she was doing" or "who exactly she was doing it to" and that "her father is going to be very upset and she could lose her job." Now, the girl made the worst argument in the history of man, but at SMU you never know whose little princess you might be offending. I thought at the very least the meter maid would talk back and engage this girl in some conversation, but the woman was having none of this. Guys, there isn't an instrument sensitive enough to measure the shit this meter maid didn't give about the little girl's problem. It was...refreshing.

SMU is asking their students to white out Ford Stadium this weekend, so I'll tell you exactly what's going to happen on the Boulevard this weekend lest you think SMU is going to pull this off. A bunch of frat and sorority girls dressed for a night clubbing in Miami will file into Ford Stadium and be incredibly enthusiastic...for about 10 minutes. Then, they'll get bored and realize that they have all the booze they can handle just outside. Ags, if you don't have a ticket, hang around. You'll be able to snag some drunk student's ticket before halftime. Ford Stadium should look like Baylor did when the Aggies played in Waco. Maroon that sucker out. Also, your best pickup line this weekend is "I have a room at the Ritz, let's go check out the bar." Have fun, use a fake name. I suggest "Craig James."

Aggies get Gangnam Style all over the Boulevard.

Sumlin described our second half collapses as "the elephant in the room." Which means it’s either being ignored or going unaddressed, right? Ok, then I’ll say it: "HOLY CRAP WHAT THE HELL IS THAT ELEPHANT DOING IN THIS ROOM?!"

I know, I know, I misspoke. My bad. Last week was a KICK to the balls. This is the week he’ll grab a fist full of your eyeballs and never look back.

I know he threw 4 picks and transferred schools the last time he faced an SEC defense, but I personally think he’s taken way too much flack from t.u. fans and frankly, everyone in the medi...okay I’m sorry I can’t even finish that sentence.

When you see the giant arm with two tiny legs trot out onto the field after we score, DO NOT BE ALARMED. Its name is Margus Hunt and it blocked more field goals last week than Taylor Bertolet has kicked in his entire career.

"We don't tailgate. We boulevard." Such a simple phrase, and yet such a powerful warning. The women at SMU prefer the finer things in life: Fancy dresses, nice shoes, designer handbags, and most likely, not you. I tell you this because chances are you'll see some pretty attractive ladies if you're walking around that lovely tree-lined campus on Saturday. Chances are you might even feel confident enough to talk to them. And chances are you have no shot. Keep in mind these gals are paying over 40 grand a year in tuition and fees; do you really think you and your $55 adidas sideline polo are going to impress her?

Attention fans of other schools: It's 7:00 on a Thursday night…do you know where your top recruiting target is? Because Kevin Sumlin does. And there's a good chance he just swooped down in his new Swaggcopter to say hello. And maybe show off a few photos of the brand-new player development center. Or talk about being able to stay in Texas and play in the SEC now. Have I mentioned his plans to expand Kyle Field to over 100,000 seats? Trying to compete with that should keep you up at night. In honor of this week's opponent, my only advice is to start cheating. Now. (Free tip from personal experience: a solid gold Trans Am won't cut it).

Admit it, Aggies: you were texting friends during the first half of the Florida game exclaiming that we were watching the most exciting Aggie offense ever assembled. 30 minutes of football later, however, you were insisting Johnny Manziel was somehow incapable of throwing the ball more than 5 yards down the field and that Kliff with a K and his perfect hair should be run out of town on a rail. Texas A&M fans prone to hyperbole? That's the dumbest thing I've ever heard in my entire life. Let's look at the facts here: SMU gave up 393 passing yards to an RGIII-less Baylor in their season opener. Something tells me JFF is gonna be just fine.

Please not against a Conference USA opponent. Pretty please? Look, I'll be as excited as anyone to finally chalk up that first win of the season, but let's not embarrass ourselves by rubbing in our new conference's superiority as the game winds down in the fourth quarter. When you smash an insect with your windshield at night, do you immediately pull off the highway, get out of your truck, and start chanting "Chev-ro-let! Chev-ro-let! Chev-ro-let?" Same principle applies here. Act like you've been there before. Let's take the W and move on. 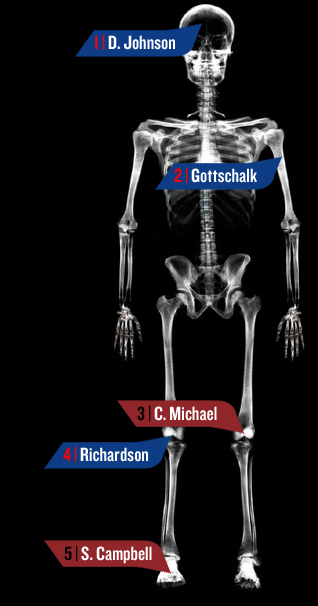 Head injury against Baylor, questionable for A&M. Anyone injured against Baylor had to have upset God in some way. Get right with the Lord, Darius. Stop all the dancing.

ACL is fine, got taste for blood against UF. Prediction: Pain...for the Ponies.

Knee injury, out for season. Season ending knee injuries have to suck. Sorry, man. At least you have a direct in for some Florence Nightingale Syndrome action.

Campbell's foot is fine. Or is it? I'm no podiatrist, get off my case. 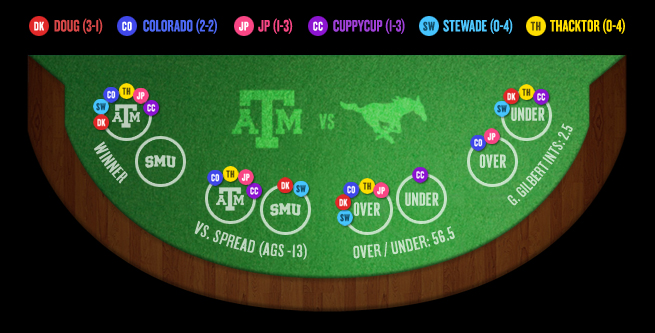 STATGASM: CRUZ BY A NOSE 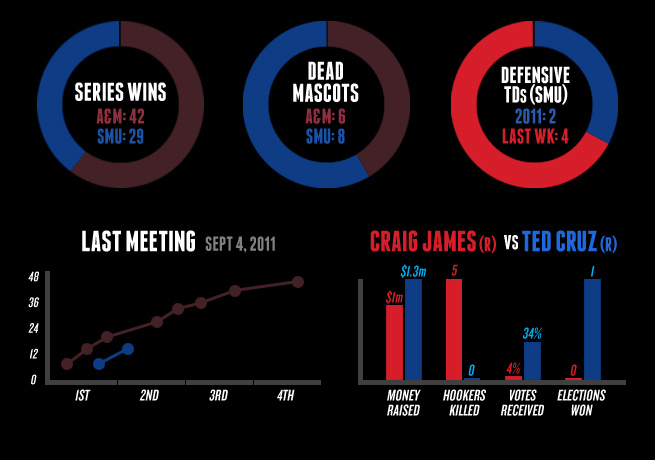 IN ANY EVENT: PLEASE, JUST SHAVE

Planning the post-party 4 days ahead of time can get dicey, but I’m willing to do it so you can feel free to use your brain as little as humanly possible on Saturday.

I generally reserve this spot for a victory dance of sorts, but how could I possibly pass up Keith & Margo's Ultimate Murder Mystery Dinner at The Old Mill Inn, where you can enjoy an "audience-participation mystery with interactive incognito suspects, prizes, taxes, tips." Sign me right up for that taxes part, sir. And if you stay long enough, they may take requests, such as "Who Killed C-Mike’s Heisman Campaign?" or "Why Dine When You Can Die: A Night Through of Eyes of a Dallas Call Girl."

Remember those 40-grand-a-year lady investments JP mentioned above? If you had any shot, any shot whatsoever, it’s at an SMU post-game victory party at The Loon in Uptown Dallas. The lethal combination of the stiffest drinks in the city and whatever this is may (I repeat, may) blind her drunken little eyes to that sweaty sideline polo and throatee you grew for good luck. And no, she doesn’t think it’s cute, "like a little under-chin pet" that she can "tickle if she plays her cards right." You’re gross, dude. Take a shower. Sleep this one off.

Since they were eliminated in 1996, a tie game is about as rare as a successfully growing a decent cabernet grape in the Texas heat. So why not head out to the 26th Annual Grapevine Grapefest and drink off what was likely an 8-hour, 12 overtime, heat stroke-inducing tiefest against Garrett Gilbert’s Conference USA team. And if you plan on grape-stomping your cares away, please do so responsibly.

Source: After welcoming Texas A&M and Mizzou on Saturday, Mike Slive visited Arkansas and Kentucky on Sunday to kick them the hell out.

BOL user points out that Auburn is the first team to ever be ranked 7th in the SEC West. Texas A&M gets tiebreaker for playing less games.

#SMU sucks so bad, that no one has created a parody twitter account for June Jones. #CJK5H #PonyExcess#RunAndShootWasPopularInThe90s #SEC

I'd like to say no way that Texas elects Craig James, but somehow you've elected Rick Perry three times.