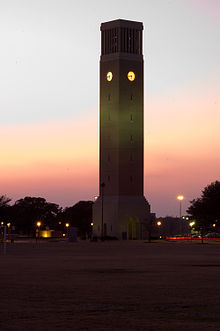 We’re trudging across the campus of the Mays Business School with the banners slung over our shoulders. The sun is coming up behind streaky clouds lit up with pale purple tinges that hint at a cooler day than normal, though the wind is already picking up more than we’d hoped for. Parking lots that will soon be swarming with cars, people, and tents are stark and empty. Security trucks with blinking lights pay us no mind. Lucas Jackson’s observation is accurate: if you want to look like you know what you’re doing and avoid suspicion, walk around with eight-foot lengths of PVC pipe. We cross the railroad track embankment through a gap in the construction fence to the mild bemusement of a few workers and jaywalk the sparse traffic on Wellborn towards the unmistakable crowd noises coming from the GameDay set.

After a few minutes of trial and error, we figure out the camera angles and how to track ourselves on the monitors. We stand for a while near the girl with the Washington State flag, knowing that is a safe bet to get on camera. Later we choose a spot that looks promising for maximum coverage and begin practicing moving in sync with the skycam. By 8:00 we’ve already been spotted by readers who begin Tweeting screencaps. Lee and Chris are great with the crowd: they love the energy and they seem to appreciate the audience being up so early. They’ll come out and engage us during commercial breaks and at one point they even begin dancing upon request: Lee does some mutated form of the Cabbage Patch while Chris does a traditional Cossack folk dance. The crowd loves it, and I am no exception.

The excitement of the main opening sequence has died down, and we’ve established a solid position where our banner can be seen right behind Kirk’s head when the camera focuses on him. I am regretting not bringing water, but for some reason I thought it might be readily available, even for sale. But the only refreshment that has been offered was a lady walking around with a bucket of mini Cheez-It packages. I can’t imagine anything less appealing at the time. The wind has picked up as well, and despite the vents we have cut in the signs, the heavy nylon is acting as a sail and the PVC is being tested repeatedly. We have to grasp the pipes as high up as possible to avoid them bending back too far, and we are forced to occasionally bring the sign down and try to adjust the corners that are being battered by the gusts so that the banner remains flat and legible. But it’s fun. The crowd is fun, and only a few are being obnoxious or childish. There’s always a self-proclaimed comedian in the bunch. The Florida people are great. We talk to the guy holding the giant Muschamp Stare head and get him to photobomb us. We settle into a routine: rest with the pipes planted in the ground until we see Kirk on the monitor, then hold the sign up. I start watching the clock on Albritton Tower. 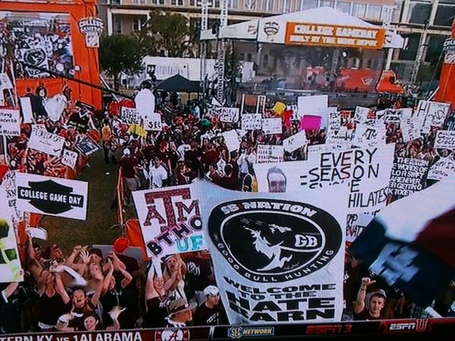 Our banner has pretty much had it: the corners have come unraveled and it has begun to slide down the pipes despite our zip tie and duct tape rig. We take over for cuppycup at the other banner and make it through the final half-hour. Then it’s abruptly over, and we set the signs down and wait for the crowd to disperse. We meet up with DerekAggie06 and talk about our tailgating route. After a small amount of hassle, we get the Florida Alumni Association tent to loan us a pair of scissors to cut the signs off of the pipe so we can roll them up and carry them around to the tailgates.

We finally arrive at the first tailgate. After the initial greetings and introductions, we greedily dip into the large ice chests. I kill a mini-bottle of Gatorade immediately and grab another, then we gratefully sit at a vacated table to enjoy the shade and watch the other games in action on the large TV in the corner. Mississippi State and Auburn are scoreless. Kansas State is running away from Miami. These register on some dim periphery in my mind as the muscles in my back and arms begin to relax and we check up on GBH. More pictures are up, and it seems that several people saw the signs. Encouraged, we start to pay more attention to the real reason we’re here: football. After another bottle of water and ten more minutes of watching the games, we feel intrepid enough to grab something else. We select the lightest light beer available and begin to make our way through the tailgates to our next destination, observing.

I’ve never ventured this far into the tailgating area before, having mainly visited the ones nearer campus, but it is impressive. It is a precise tent city with neatly arranged grass thoroughfares and no wasted space. It’s a model of efficiency, with concise circles spray-painted on the grass to mark where tent stakes should go and structures set up in accordance with the undulations of the terrain. You get the feeling that it was built by engineers, and in large part, this is probably true. There are not as many Florida fans as I would have guessed, but they seem to have thinned out the further we get from campus, which makes sense.

We sit sated under the tent canopy in camp chairs at our next destination, having partaken freely of the spread at the next tailgate. Our next stop will be Kyle Field, but for now I am content to sit in the slight breeze and discuss the game. People are genuinely excited about the move to the SEC. There is no false bravado, no bitter sentiment, just a genuine appreciation for the fact that we’re now part of the most respected football conference in the country. There is also a good deal of excitement over Kevin Sumlin and Johnny Manziel. After a quick round of photos with the banners, we make our way towards the stadium.

We reach our section, which is near the Florida band and contains several Gator fans. After picking up another liter of water, I make for the men’s room before going to my seat. I’m standing in line outside behind a Florida fan when the four Florida cheerleaders walk by. He says, "well…at least our cheerleaders look good."

"At least you have cheerleaders," I say. He turns to me and laughs and says "yeah, at least you’ll get to see cheerleaders today." I nod in agreement.

A moment later the line gets to the swinging door and he says, "whoa! They really do have troughs in the bathrooms here. This is legit!" It’s as though he’d read a rumor on the internet that had just been confirmed. A small measure of Texas pride blooms inside me: as if we’ve already brought some small measure of frontier impropriety to the conference. I had no idea there were anything other than troughs at a football stadium.

Our seats are top-flight, but they did not come cheap. We decide that for SEC games we will no longer be able to gamble on tickets in the hours before kickoff as we have been accustomed to doing. There were hardly any sellers offering anything outside of The Zone. But here we are, 40 feet behind the Florida bench. Samatha Steele is there, and soon after Lee Corso comes out in a purple polo shirt and skinny jeans and visits with some of the coaches. We note the changes in our warmup routines and look for the freshmen who are going to play. But most of all we watch the clock count down.

Johnny Manziel is excited. He’s right next to Sumlin at the front of the tunnel, and he is ready to run out. He is jumping up and down and must be constrained by an assistant coach when he starts waving his arms during the Florida fight song. We lost the coin toss, so he gets the ball to start the game. The first two plays are not at all encouraging and we wind up in a 3rd-and-16. Then he gives everyone there a glimpse as to why Chip Kelly wanted him at Oregon: a deft 16-yard run for a first down, showcasing his raw athletic ability. The man in front of us is impressed: he’s comparing him to Bucky Richardson. After a few more drives, I find it hard to dispute the comparison completely.

What follows in the first half is better than what I had hoped for: we score on our first three possessions and sack Jeff Driskel five times. Manziel scores on a dazzling run that leaves a Florida defender completely flat-footed. Christine Michael barrels his way into the end zone for another touchdown from the Wildcat after an end-around pass from Kenric McNeal to Mike Evans. We lead by ten points a few minutes before halftime, but give up a late field goal. We are still up by a touchdown going into the locker room and I’m feeling positive because of how well our defense has been playing.

The band has finished and I am sitting down for a few moments of relief since I’ve been bipedal for most of the past ten hours. I’m thinking too much: I’m thinking that we really needed points at the end of the half instead of having a penalty and a sack take us out of field goal range. I’m thinking Sumlin should not have tried to ice Caleb Sturgis on that last 51-yarder since he missed the original try and made the second. But most of all I’m thinking of how many times we’ve been in this situation before and how many times we have not finished. I don’t want to be thinking these thoughts: I want to erase them because this is a new start in so many ways. But despite all the good things that have happened, I am thinking them. But I'm still more encouraged than I have been in a long time. This is part of the neurotic nature of a college football fan.

See for Part 2/2 by Lucas Jackson.