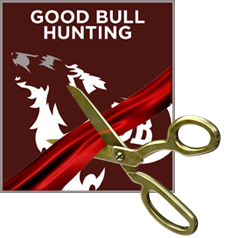 Good Bull Hunting has been in the works for some time and all of us involved are excited to go live. Our enthusiasm was contagious as @GBHunting picked up 500 Twitter followers in under 2 days following our premature launch announcement. This instant support is a testament to the great staff we’ve assembled and underscores the need for a strong Aggie community in the SB Nation network. We aim to be insightful yet irreverent in delivering daily content from the 12th Man’s perspective. "Good bull" refers to anything which promotes the Aggie spirit, blogs included. Our name conveys our mission to creatively and interactively pursue good bull and also prepares you for routine references to the Ben Affleck film catalogue.

ColoradoAG (@jimmygards) is a member of the Fightin’ Texas Aggie Class of 2006. He was born and raised in Fort Collins, Colorado and is often referred to as the best skier in Texas A&M’s illustrious history in the slalom. After a spell in Dallas, ColoradoAg left for Notre Dame’s business school. ColoradoAg was born into a family of Fightin’ Irish and showed his passion for college football when he kicked a wall so hard after the called back punt return of Rocket Ismail in the 1991 Orange Bowl that he passed out. He was seven.

Much of ColoradoAg’s affinity for tradition and quirky fan bases translated with his love of the Irish into his love of the Aggies. He has blogged on occasion over the years for Barking Carnival because he liked the wit and shit. ColoradoAg has a deep love for A&M football, Irish football, ice hockey, cheeseburgers, cheap domestic beer, Robert Earl Keen, I-formations, Hayes Carll, and tailgating way too hard. Ty Webb, Karl Welzein, and Howard Taft are counted among inspirational figures in his life and he has no tolerance for mayonnaise nor the phrase "it is what it is." His favorite Aggies are Jorvorskie Lane, Von Miller, and Rip Torn.

cuppycup (@cuppycup) is a modern day carpetbagger, northerner by birth and Aggie by destiny. Cloaked in maroon and white, he lives in the shadows of Kyle Field but is not very helpful. His first Texas A&M football game was the 1986 Cotton Bowl where the Fightin’ Texas Aggies repeatedly stuffed Heisman Trophy winner Bo Jackson at the goal line en route to a 36-16 victory. He thought it was awesome that Aggies said "hell" in unison.

Cup has an abundance of literary accomplishments that will serve him well as a member of this staff. It would take too much space to list them all but highlights include writing for a high school newspaper, winning a poetry contest in 6th grade, and inserting "This page is intentionally left blank" notices into technical manuals. cuppycup has been fine-tuning his snark since his mommy opened a Prodigy account for him in 1990. He built his first website in 1994 which featured a prominently beveled logo. cuppycup has been a regular poster on TexAgs since 2006 who started gratuitously posting animated gifs during realignment last year. He attributes his popularity to the rubber stamp tool in Fireworks which is a version of Photoshop for idiots.

Dr. Norris Camacho (@DrNorrisCamacho) is not really a doctor or very helpful. He's Class of 2000 and likes watching Aggie football with his grandpa, Class of 1950. He grew up in the Texas Hill Country and eventually ended up back in San Antonio after college, where he married well out of his league. He's been around TexAgs since 2001 and has been following EDSBS since 2006 and commenting since 2010. Influences include Cormac McCarthy, the Coen Brothers, Kinky Friedman, growing up in the '80s and '90s, and the Internet. His favorite Aggie player ever is Dat Nguyen.

Doug Keegan (@doug_keegan) is a member of the Fightin' Texas Aggie Class of 1999 (Yes, we all talk like that, it's part of the brainwashing), but he enjoyed his college experience so much he graduated in 2000 with a BS in Applied Math. Raised in Houston and its suburb of Pearland, Doug grew up in the heyday of the Jackie Sherrill and RC Slocum eras, where A&M was the place to be. Joining the collie cult felt natural. The Dennis Franchione and Mike Sherman tenures have shown this to be a classic bait and switch sales technique.

Since graduation, Doug has resided in Austin, where he writes software, antagonizes nutless bovines, travels to ski and catch Pearl Jam concerts, and loses prodigious amounts of money wagering. He's been an active member of TexAgs since 1998 and shares oh-so-important insights in 140 character bursts as @doug_keegan on Twitter. A masochist by nature, Doug also holds season tickets to both Aggie Basketball and Aggie Baseball.

Lucas Jackson (@coolhand_lucas) is a graduate of Texas A&M and a proud member of the Fightin' Texas Aggie Class of 2000. He was raised in Northeast Louisiana, attended high school in Chattanooga, TN, and has lived in Temple, Fort Worth, Little Rock, and Baton Rouge. Having spent years in SEC country, Lucas is well acquainted with our new conference brethren.

Lucas has been posting on TexAgs since 1999 and Everyday Should Be Saturday since 2011. His role models are Augustus McRae, Fletch, Slash, and Teddy Roosevelt. His favorite Aggie player of all-time is Jason Glenn.

Derek LaFitte (@DerekAggie06) is the shining star of the Fightin' Texas Aggie Class of 2006. He was born in Houston, educated in College Station, and recently made a move from Dallas to his new home in Austin. Derek grew up in a family of Aggies that dates back to his grandfather, but his first memory of A&M sports is when he nailed former head basketball coach Tony Barone in the face with a chest pass at a youth basketball camp. Since that day, he's been an avid follower of Aggie football, basketball, and soccer.

Derek has spent some time writing articles for a few SEC fan sites, and he also graces the airwaves with his bravado as the host of the Around Aggieland radio show that covers A&M and SEC sports. Outside of his sports wisdom, Derek has a wide range of interests that include movies, fajitas, golden doodle puppies, and never getting enough sleep.