Your beloved GBH staff members polled amongst themselves and voted for a variety of awards they just made up. Just bloggin'. Leave your comments below to tell us where we messed up.

Here we go. When the season suddenly ended and we were all wondering what the hell to do next as we waited for the Heisman ceremony to occur and for Bowl Season to start, we conducted an incredibly scientific poll among the twelve of us.

Anyway, the poll was conducted very scientifically as I believe I mentioned before via spreadsheets by none other than...SpreadsheetAg, shockingly. Award names came courtesy of him and Lucas Jackson, primarily. Without further ado, here we go:

Offensive Player of the Year:

Defensive Player of the Year:

Special Teams Player of the Year:

Patrick Lewis. A Staff favorite. Did a tremendous job this year in a new system calling the line plays.

Johnny Manziel. (some of these got kind of repetitive...)

Sophomore of the Year:

Cedric Ogbuehi repping the OL. Glad we have him for two more years. (Deshazor, you were close!)

Junior of the Year:

Luke Joeckel. We're not that stupid.

Trey Williams. He's going to be a huge star for us.

(note: this one got the rare half vote from me because I put "Spencer Nealy: ALL OF THEM")

Overachiever of the Year:

Underachiever of the Year:

C-Mike. His expectations were really high, but he didn't quite mesh with the new coaching staff. I hated having to vote for this one, but we are an objective organization. LULLZ

Most Likely to Become a Politician:

Most Likely to Make an NFL Pro-Bowl:

Luke Joeckel. Work on your golf game when you're out there.

Most Likely to Become a Successful Coach After Football:

Good Bull of the Year:

Spencer Nealy. This guy isn't projected very highly on anyone's draft board, but he played his ass off for us this year. Plus he hosted Johnny on his recruiting trip two years ago. Good Bull.

Dustin Harris. Dustin continued to impress as a punt returner as he's done in the past, but he really stepped up his game as a DB this year. His open field tackle on McCarron might have saved the Bama game for us. Great year for #22.

The OL. With the WRs a close second, for their blocking efforts downfield.

Mike Evans. Easily. If you DBs thought this was hard, wait until you have to cover RSJ next year.

Sirr Parker Play of the Year:

C-Mike. He may have had a rough year, but he was always on the side of his teammates. I think SHSU will verify this.

Player Receiving Votes in Most Number of Categories (last-minute addition):

Ryan Swope. All over this poll like it was a Bama DB. 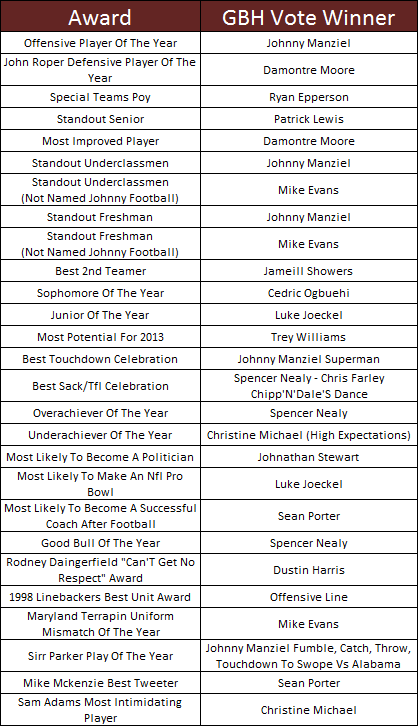 *Editor's note: Special Teams POY does not reflect the tie in voting between Epperson and Williams that was discovered later. The parties responsible have since been sacked by Damontre Moore, but no one noticed.