See how the Alabama Crimson Tide stack up against Texas A&M’s Fightin’ Texas Aggies in this week's Foundation of Facts...

Share All sharing options for: 2012 Foundation of Facts – Game 10: Texas A&M vs Alabama

For the second week in a row, the Aggies stepped on the gas and cruised to a victory, but this time it was against Top-20 Mississippi State (7-1 at the time). This week we will look at how the brawny ‘Bama Crimson Tide (#1 BCS) stack up against the Texas Aggies (#15 BCS).

Alabama is #1 for a reason. They are the best team in the land this year, so far this season. Looking at their schedule they have faced some weak and mediocre competition except for LSU and Mississippi St. Texas A&M is 2-2 versus teams that have 2 losses or less; Alabama is 2-0. Alabama as only allowed 82 points this year and Texas A&M has scored over 400 points.

2. Alabama leads the SEC in 11 of 22 categories listed below; and they are top 4 in everything except for: sacks per game, TFL per game, 3rd down conversion defense, and fumbles recovered. They aren’t too shabby on offense either, leading in: Pass efficiency, points per play, point per yard, redzone offense, and turnovers given away. 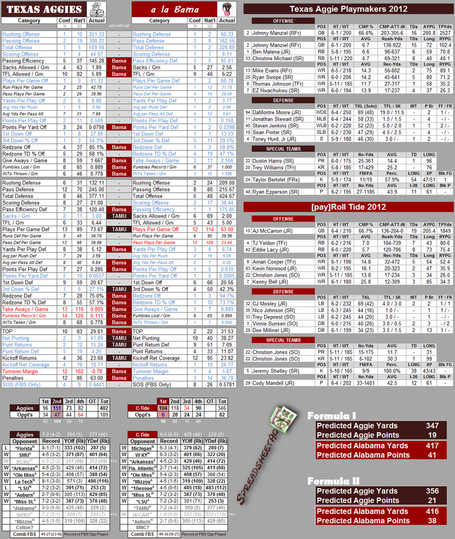 2. I think the one big thing the Aggies may have in their favor is our 3rd down conversions which could lead to more plays for Aggies offense, and possibly, due to our tempo, wear down the Alabama defense which simply isn’t used to playing 80, 90, or 100 plays in a game.

3. Continuing that train of thought, the most amount of plays that any team has run against Alabama’s defense was LSU with 85 plays. As would be expected, LSU came the closest to defeating Alabama, scored the most points on them of any team this year, and put up the most yards (passing and rushing) of any team Alabama has faced.

6. The Ags could win the field-position battle with their advantages in Net Punting, Punt Returns, and Kick off returns.

7. Alabama comes out slow, or conservative, or asleep on offense in the 3rd Quarter. They have only score 34 combined points in the 3rd quarters of this season and have given up 24.

I hope you enjoy this feature and will come back next week to see how the Aggies will fare, statistically, against the SHSU Bearcats in Game 11. Here's a picture of me holding a Bearcat in Bali earlier this year: 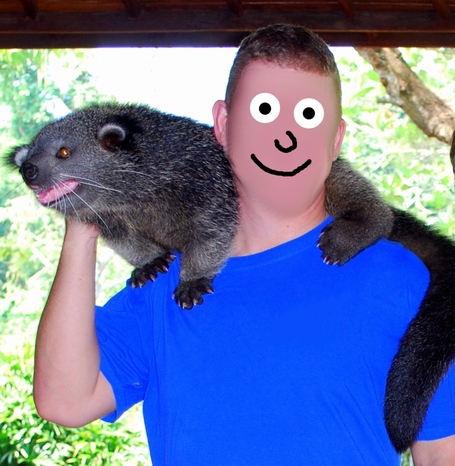 LOOK AHEAD: SHSU is 7-2 overall in the FCS and 5-1 in their conference. A&M is coming off an emotional week no matter if they win or lose. SHSU might make it interesting for a quarter, but I doubt it.