THE TAILGATE: A graphical preview of Texas A&M at Alabama

48 And it came to pass, when the Sabantine arose, and came, and drew nigh to meet Sumlin, that Sumlin hastened, and ran toward the army to meet the Sabantine.

49 And Sumlin put his hand in his bag, and took thence a quarterback, and slang it, and smote the Sabantine in his forehead, that the quarterback sunk into his forehead; and he fell upon his face to the turf.

50 So Sumlin prevailed over the Sabantine with a King and with a Manziel, and smote the Sabantine, and slew him; but there was no Heisman in the hand of Sumlin.

51 Therefore Sumlin ran, and stood upon the Sabantine, and took his Heisman, and drew it out of the sheath thereof, and slew him, and cut off his head therewith. And when the media saw their champion was dead, they fled.

Share All sharing options for: THE TAILGATE: A graphical preview of Texas A&M at Alabama 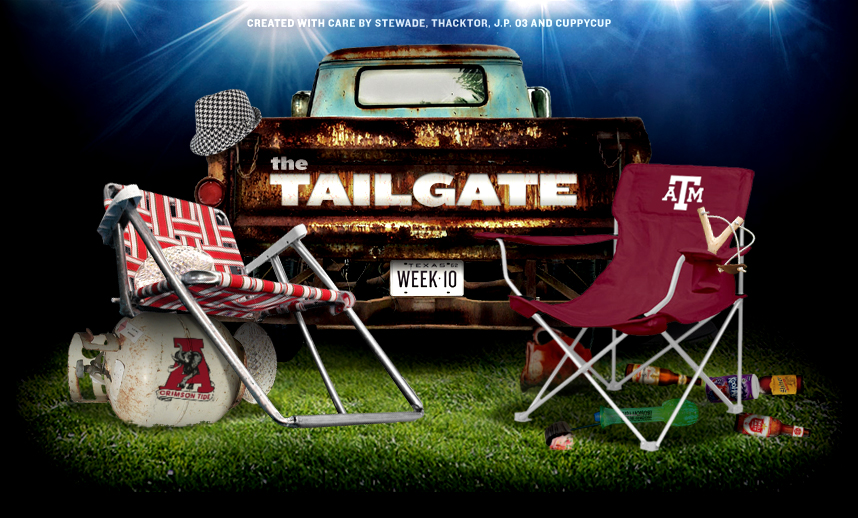 On Saturday, the Texas A&M Aggies are going to square off against the Alabama Crimson Tide at 2:30 on CBS.

I want you to read that again. Done? Good. Let it sink in, Aggies. Our Aggies are going to put on their formal attire and debut to the national scene against the number 1 team in the nation on CBS and they have a chance to win. They’ve lost two close games to a couple of excellent teams, have gone on a bit of a roll and now have the chance to show everyone how good this team can be. I apologize for the lack of hilarity at this point, but it’s still a bit hard to fathom.

I may be uninformed, but I’m not so blind to be unaware of the fact that when you’re talking to a Bama fan, everything ends with "roll tide." It’s very versatile. Let’s experiment:

"I firmly believe that when Saban signed with Bama, the spirit of the Bear entered his earthly vessel and merged with his own to create the finest damn football coach the world has ever seen – roll tide."

"I got this tattoo series done to pay tribute to the finest damn football team in the universe, The Alabama Crimson Tide – roll tide."

"We traded Texas A&M for a coach-to-be-named later and we gave them Dennis Franchione. Roll tide."

You can study anything in college now. Seriously, anything. So, if you’re currently attending Alabama, please take BEF 155: Behind the Poms: The Cheerleader in American Culture. Do this and, please, send me your notes. I’m very curious about this as we do not have cheerleaders at A&M. I need to know what they are. How they operate. What they’re thinking about. What they smell like. If they like out of shape 30-somethings that blog about a college football team. If they have shrubberies suitable for hiding in next to their windows. I mean, their place in American Culture. Yeah, that.

ABSURD GAME PREDICTION: OUT OF HIS MIND EDITION

I’ve just butt-chugged maroon Kool Aid while listening to the War Hymn, let’s do this. The Aggies storm the field in their Icy White uniforms, completing the Adidas product line clause in their licensing agreement. Coach Sumlin walks to midfield to interrupt the coin toss and tells the ref, "It doesn’t matter, give ‘em the damn ball." and calmly walks back to the sideline. Kingsbury has lit himself on fire.

Manziel starts at safety just to screw with Saban. Saban laughs, consults Ouija board for the next offensive set. Spencer Nealy eats a bag of sugar, washes it down with a case of 5-Hour Energy and is suddenly able to Ha-Do-Ken. This causes problems for the Alabama o-line as they didn’t see "shoots fireballs from hands" in the scouting report.

Manziel, Malena, Michael and Williams rush for a combined 350 yards and 3 touchdowns. JFF wins the game when he unlocks the "Levitation Achievement" and literally flies down the field for 80-yards in the remaining 5-seconds in the game. He doesn’t win the Heisman, but it somehow materialized in his hands in the end zone. Sumlin somehow grabs a microphone and delivers the post-fight monologue from Rocky IV to the remaining Alabama crowd, they are reduced to tears. Kevin Sumlin is a good orator.

Last week he ripped open his imaginary suit to expose an imaginary Superman shirt underneath. Can the magic continue in Tuscaloosa? One can only imagine…

Nealy will need to eat up space in the middle this week the same way that Chris Farley devoured any role in his path in the mid-‘90s. Don’t switch his coffee. http://www.ebaumsworld.com/video/watch/696639/

Sensitive. Misunderstood. It’s not a playground, Kliff Kingsbury, it’s a temple. You must honor it before you explore it. Rights are earned; not given.

A single tear rolls down his cheek. A single score delivers him from LSU. A single factor drops him squarely into the Heisman race: zero losses. Time to watch what a real playmaking QB can do, AJ. It’s okay to cry. Johnny causes that.

Three year starter. Excellent cover-er. Great talent. Draft prospect. He looks to Coach Saban for comfort. Nick’s slightly less-than-death-mode gaze gives him a small bit of comfort. He has not made a mistake yet, so he is still on the team. Let’s play!

An Irresistible Force vs. An Immovable Object

Kevin Sumlin has built quite the offensive juggernaut in College Station: Over 550 yards per game. More than 40 points per contest. And one dual-threat highlight machine at quarterback. Unfortunately, the SEC is known for one thing and one thing only: defense. And Alabama plays it like no one else. Through nine games, they've averaged giving up nine points and 228 yards. The most points they're surrendered so far? 17, last week to LSU. ON THE ROAD. AGAINST A TOP-10 TEAM. So yeah, suffice to say this one's gonna be interesting. And no one knows what will happen when these forces collide on Saturday. Might the destruction be worse than when the Ghostbusters crossed streams? Or will it be an over-acted, incredibly cheesy stalemate like Lincoln Hawk vs. Bull Hurley? A&M! Alabama! Something's. Gotta. Give. (Watches the CBS College Football intro for the millionth time this week)

Regardless of what happens on the scoreboard, we'll get to see A&M's true colors shine through this weekend. Should the Aggies be defeated, you'll get to witness us adding to our FBS-leading moral victory total. Yes, Alabama's depth will probably win out in the second half, but did you see how much respect we earned? Did you hear how many nice things they said about us on TV? Think of all those recruits who were watching. If we put together one or two more recruiting classes like the one we have now, look out! The sleeping giant is finally being awakened! Shudder. On the other hand, has anybody stopped to think about what would happen if A&M actually wins? Bama drops from #1 and K-State, Oregon, or even (gasp) Notre Dame could potentially take their spot in the BCS National Championship Game, thus accidentally bringing the SEC's streak of dominance to an end. Knowing that, would there be anything more "Aggie" than completely screwing something up on such a grand scale? The fallout would be spectacular, and I, for one, would love to see it.

I don't want to ruin the surprise in the next section for you, but this week I finally bit the bullet and bet against the Ags for the first time ever. I just think the challenge is too great, and deep down, I believe the Aggie players know it, too. You hear me? NO CHANCE. We're like the 50 year-old mom trying to run the obstacle course on Family Double Dare: we as fans are obligated to cheer for her, but everyone in the audience knows she's got no shot at victory. Sure, we may have some early success picking the flag out of that giant nose, but does anyone honestly believe we'll get down the Sundae Slide in time to win that trip for four to Universal Studios Orlando? Or to borrow another Nickelodeon analogy, we're like the scrawny nerd Sponge from Salute Your Shorts trying to engage in fisticuffs with the behemoth Donkey Lips. There's no use fighting it; our best bet is to just sit back and take our Awful Waffle from 'Bama like a man. Sigh. If only someone could prove me wrong…

Mad props to the A&M equipment staff for keeping those sweet all-black uniforms secret until game day last week. Even the players didn't know about them until they walked into the locker room to get dressed. So we have no choice but to wonder if we're in for another surprise this week to give the team an emotional boost before taking the field against Bama. The smart money is on the Icy Whites finally making their debut, but what if one of these combos wins out instead? 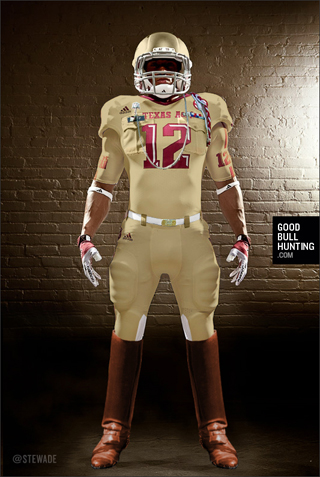 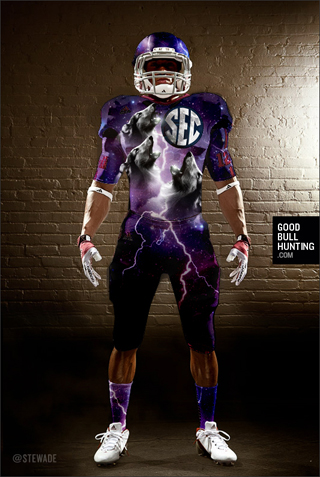 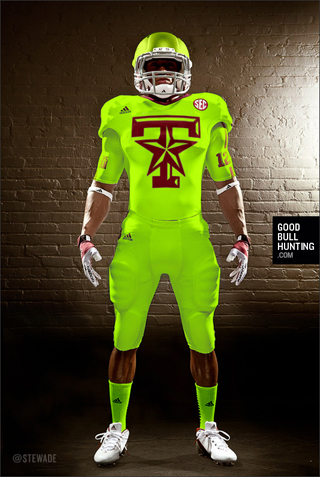 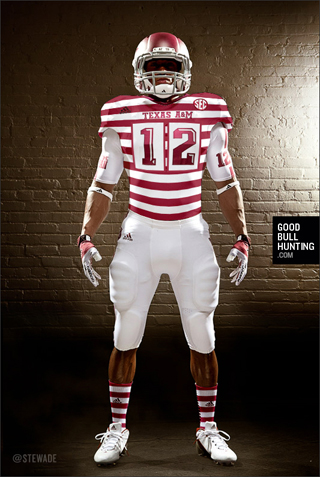 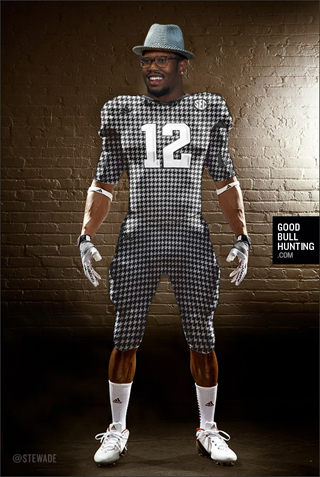 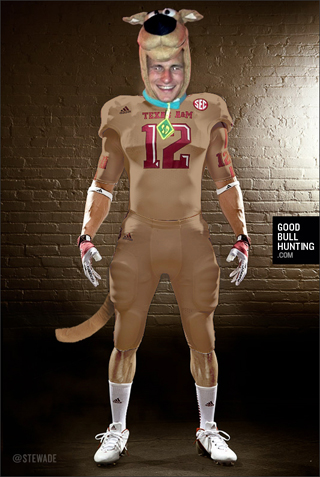 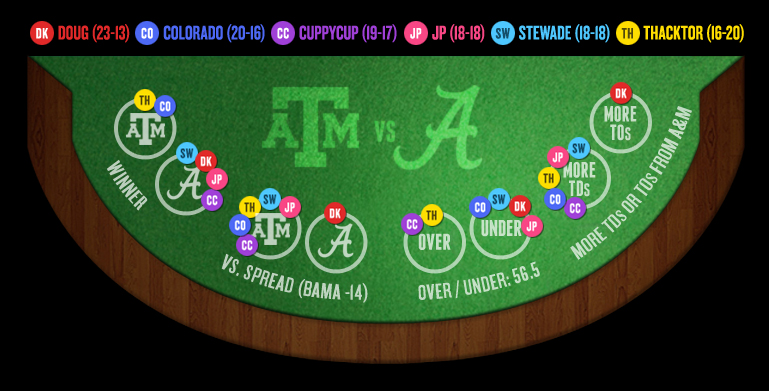 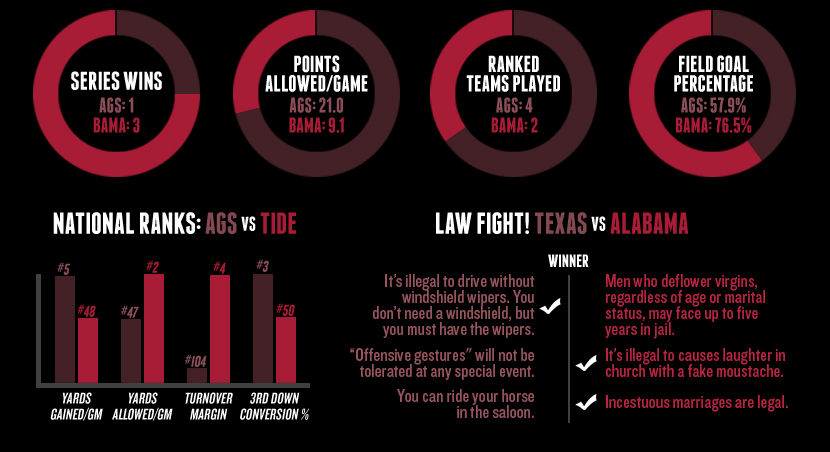 1. Calmly walk to an audio system of your choice.

Additionally, we become the most insufferable fan base in the universe's history of ever. Ever. Expect an Aggie baby-boom in July. We've also pulled the most Aggie move ever by joining the toughest conference in the nation, surprising them and knocking that conference out of the title game. You invited us, SEC. Remember?

Moral victories abound. We get petted on the head by the media even more as a "cute story."

We're business casual, there are no ties here.

Texas #Aggies like @rolandsmartin are hyped thinking Johnny Football is gonna pull off an upset against #RollDamnTide next week. Child plz

Texas A&M struggled with Ole Miss and ESPNU thinks we'll have a problem when they roll into #Ttown?! #BitchPlease

Got accepted to Ole Miss. #RollTide

I yelled Roll Tide at Hasidic Jews what did you do to make the world a better place today?

I cant wait to see Johnny Football against Bama this week. Bama coming off a 15 round championship fight, Go Time again.