THE TAILGATE: A graphical preview of Missouri at Texas A&M

Well well well…it seems Week 12 is finally upon us. And just like we predicted when the season started, one team in this matchup is riding high at 9-2 while the other needs a victory on Saturday just to become bowl-eligible. Other than that, nothing has gone the way we predicted, has it? It turns out Missouri's cupcake SEC East schedule had a razor blade or two baked inside, while the Ags have navigated the treacherous SEC West waters with the skill and grace of a modern-day Magellan. Dare I say... Manziellan? That horrible Johnny Football pun can only mean one thing: it's time for the final regular-season edition of THE TAILGATE!

Share All sharing options for: THE TAILGATE: A graphical preview of Missouri at Texas A&M 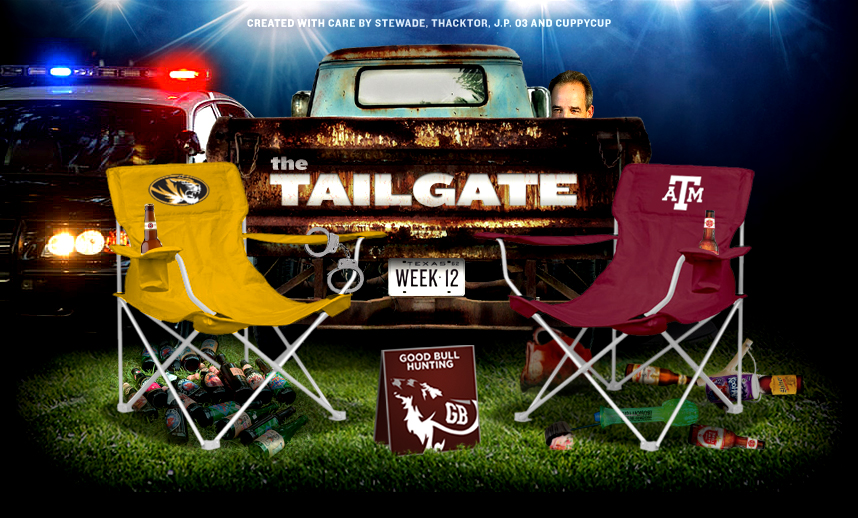 I can't believe it's the end of the regular season already. We college football fans spend most of the year talking about useless crap that we can't affect waiting for these Saturday games to come...and now, it's ending. I just...I just don't know what us poor little Aggies are gonna do without a prime time Thanksgiving game, you know? It's horrible. I mean, I'll just have to eat dinner without getting into arguments with family members, being high strung and actually - gasp - ENJOY MY HOLIDAY LAUGHING AT THE COWBOYS! Yeah, this is horrible.

Oh, right, Mizzou. That's not dismissive, I just got sidetracked and I'm sorry about that. Mizzou has been a thorn in the side of Texas A&M for a while now. The Aggies are 1-5 vs these guys since 2002. That's...well, that's piss poor. Really bad. Not a good thing. Opposite of happy times. But...

This year is different. This year there is no "Wait until next year, you'll see" out of the Aggies. No, it's "Hey, watch this." And I expect a lot of that out of Kevin Sumlin, Mark Snyder, Kliff Kingsbury, the Fightin Texas Aggie Football Class of 2013, Johnny Football and the Twelfth Man on Saturday Night when the Aggies do exactly what I'm about to prognosticate!

The senior class is announced to a home field hungry for a double-digit winning season. The energy at Kyle Field is such that all of the seniors become enveloped in it and things begin to...happen. Spencer Nealy runs to midfield, stands on the Bevel and screams "GIGATRON ASSEMBLE!" Inexplicably, a chant choir can be heard ominously in the distance, but no one knows from where it is coming. The seniors begin to levitate, all interlocking into a giant robot wearing a #12 jersey. Gigatron is assembled, and it is pissed off.

Sumlin, grinning ear to ear, hands over the remote control for Gigatron to Kingsbury who first gets it to make a dismissive hand gesture towards Pinkel. It looks like you're racking a shotgun over and over again...at about waist level. This is when things get interesting.

Manziel comes out in the first offensive drive with Gigatron lined up wide to his right. This combination isn't even fair, even for people who play "old man football." Sumlin has a bucket of popcorn.

Manziel and Gigatron finish the game with 7 TD's each and the Aggies lock up their first 10 win season since 1998. Sumlin, Kingsbury and Snyder all do a jumping high-five, freeze in mid-air and let the credits roll to this.

We'll see you guys for the bowl game, it's been a pleasure. Thanks for reading and all of your support this season. Gig 'em!

Statistically, Motorbike has had a down year. Emotionally, he's been a force on the team (for better and worse, but a force nonetheless). Last week's ejection for getting sick of SHSU's antics no doubt bought him some cred, and I think everyone wants to see him have a great last home game.

Swope has quietly put together another fantastic year while rewriting the receiving record books. No one will ever forget his catches in Tuscaloosa, but another great performance at home would not be a bad way to go out. Oh and he has six times as many touchdowns as Moe.

Porter has been the heart of the defense this year. We're going to miss him at LB after this season, but we'll always be able to keep up on Twitter. His rebuttal to Alex Okafor's feigned sympathy for our new Thanksgiving schedule pretty much summed it up perfectly.

Richardson is a force on the interior defensive line, but missed last week's game against Syracuse due to a violation of team rules. Unfortunately for him, there will be a violation of Sheldon Richardson by the Aggie OL on Saturday.

With James Franklin still listed as a "maybe" at QB, we might see the All-SEC Name candidate again this week. He's already had to start for Franklin a few times this season due to injury.

Moe expressed McKayla levels of unimpressed with Ryan Swope during SEC Media Days. Moe will be aiming for his second receiving TD of the season at Kyle Field on Saturday.

That title was not a thinly veiled Halloween joke. Or maybe it was; you decide. Anyway, to recap last Saturday: Collin Klein's K-State Wildcats got blown out by a horrible Baylor team in a hostile Big 12 road environment, Marqise Lee's USC Trojans lost to UCLA, and Oregon lost to Stanford, much to the chagrin of Kenjon Barner and Marcus Mariota. Should be a cake walk for Johnny Manziel onto the stage at the Downtown Athletic Club then, right? To quote everyone's favorite politically incorrect college football analyst, "not so fast, midget!" Now we're hearing that Manti Te'o might be a favorite. Seriously? Check out these mind-blowing stats: six interceptions, 1.5 sacks, zero forced fumbles, zero defensive touchdowns. Not in their last game against Wake Forest…those are for the ENTIRE SEASON. Surely the voters are smarter than that, but in case they're not, expect a 300/100 performance from JFF, which would break Cam Newton's SEC record for total offense in a season, and maybe, just maybe, a surprise Heisman pose after one of his rushing touchdowns. Followed by a successful extra point this time, of course.

A bizarre piece of trivia is that this A&M senior class has never beaten Mizzou, despite the fact that this is the fourth time these two teams will be playing each other during their time on campus. I expect that to change. Convincingly. Look for a strong start for the Aggie offense, after which the Tigers lay down like moderator (and Mizzou alum!) Jim Lehrer in the first presidential debate. What's that? Politics and sports don't mix? Fine, I'll reach back into my bag of obscure childhood pop culture references and hit you with this one: I expect the Mizzou defense to get bombarded worse than Moose in this multicolored slime clip from You Can't Do That on Television. Boom! There's plenty more where that came from, but I have to save them for the off-chance that both LSU and Alabama lose this weekend and we have to crank out another Tailgate for the SEC Championship Game.

In our seniors' defense, I think I see why it's been so difficult to get pumped up for this game these past three seasons. Bless their hearts, but Missouri is…well…boring. Mizzou-RAH feels more like Mizzou-BLAH, am I right?! Even their alumni are boring. Take Carl Edwards, for example. Sure, he does that neat backflip every time he wins, but that doesn't conceal the fact that he speaks too eloquently and no real NASCAR fans like him. It's almost as if he's trying too hard. Sort of like…oh, I don't know, Mizzou's bold new uniforms perhaps? Yeah, I went there. In all seriousness, though, it is kind of hard trying to come up with negative things to say about Missouri. We're like brothers now that we've been bonded by the shared traumatic experience of bolting the dysfunctional Big XII together. But as Keanu Reeves so eloquently reminded us in Speed, relationships that begin under intense, high-pressure situations never last. Which brings us to…

Oh wait, here's something to hate them for: the way they talked trash on their way into the SEC, only to have reality slap them in the face. Or body slam, as it were. Who could forget their arrogance at SEC Media Days, including TJ Moe calling out Ryan Swope for being overhyped (how'd that one work out for ya, little buddy?)? You would think a school with such a world renowned journalism school could come up with a better PR strategy than "piss off everyone in the most powerful conference on the face of the earth." Didn't Jon Hamm go there? Why didn't you just unleash some Don Draper boardroom greatness on us and convince us all that the SEC needed Missouri more than life itself? But alas, you chose….poorly. Exhibit A: Creating this ridiculous t-shirt to commemorate your victory over Kentucky. In football. Is the bar really that low? Are there no other accomplishments in the life of a Missouri student that are worthy of a t-shirt instead? Where can I order an XL of each of these bad boys? 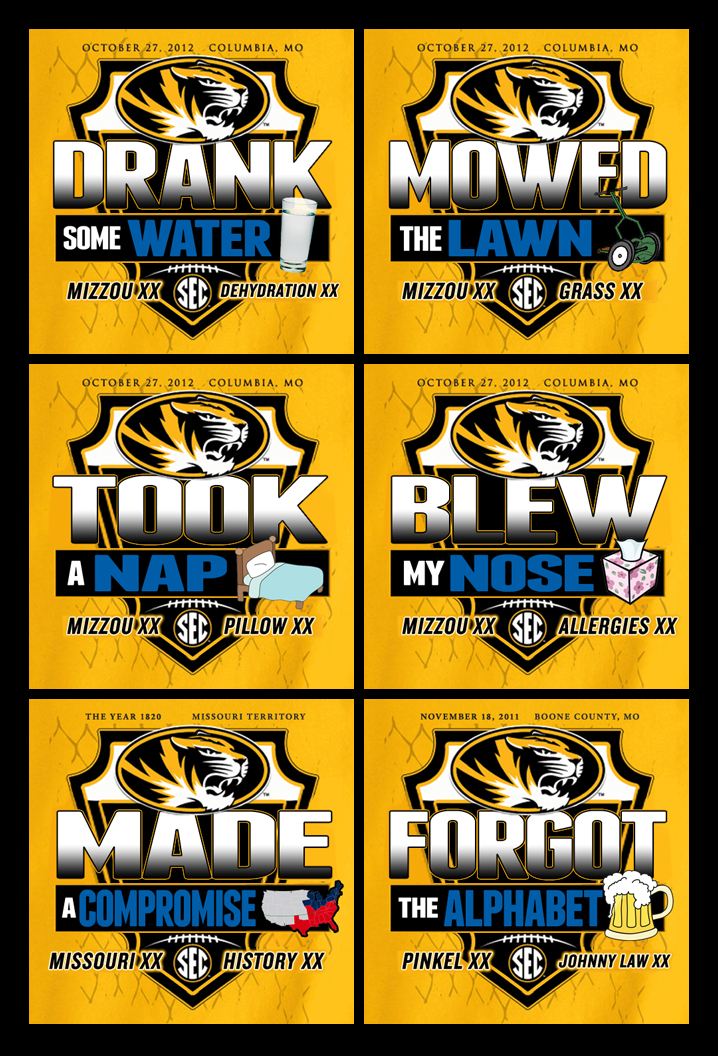 Yes, we made a Pinkel DWI joke. But only because of the amazing comedic gold during his traffic stop in which Pinkel states he has a master's degree, so the officer assigns him a task commensurate with his level of education: reciting the alphabet from E to R. Spoiler alert: he only makes it to "I," but that shouldn't stop you from celebrating, should it Mizzou fans? 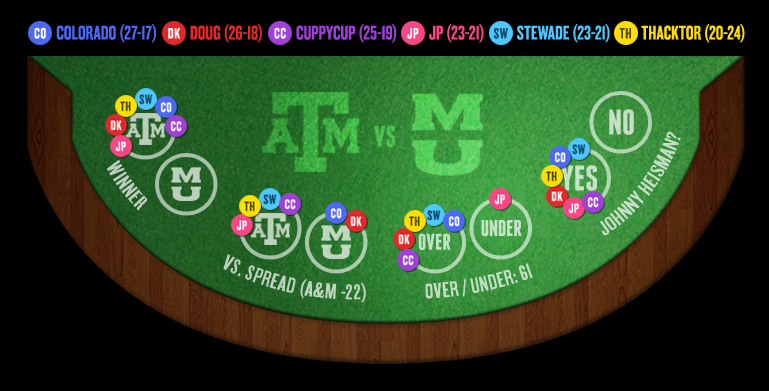 Statgasm: Get Off My Horn 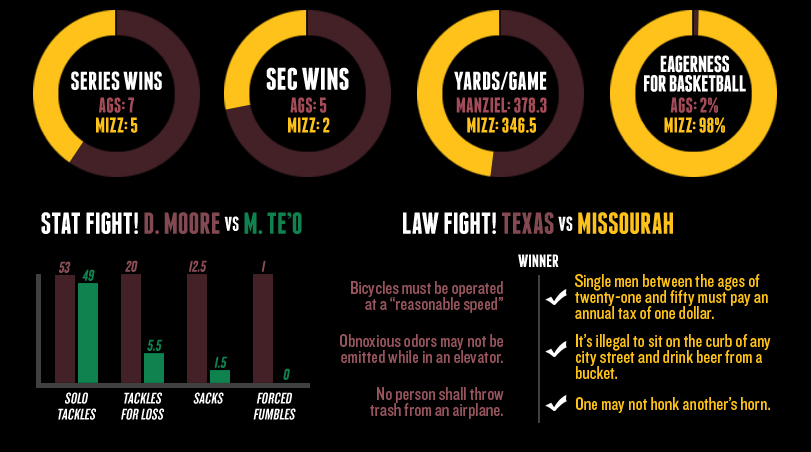 The Aggies shake all ghosts of the past off and move forward at 10-2 as a top 10 team looking for someone to punish in a bowl game.

Nealy hosted Johnny Manziel on his recruiting trip: 'When we build him a statue, I want a little plaque at the bottom.'

I don't really mind all the realignment. Business is business. What I do mind is that the SEC got stuck with Mizzou

Here's to me here's to you let's beat mizzou

Still not sure how #Aggies DE Damontre Moore (@tmoore94) isnt getting more national love or awards. He's an absolute beast

Von Miller wrecking NFL offenses. Manziel closing in on Heisman. Probably hasn't felt this good to be an Aggie in yrs.