Manziel and Te'o: Who Stands Out?

Isn't college football a beautiful thing? The dreaded SI Cover Curse struck again as Baylor effectively ended Collin Klein's chances at a Heisman and Kansas State's chance to play in the National Championship. With all the Twitter talk and infographics last week comparing Manziel to Klein, you would think that Johnny is now the unchallenged front runner for the Heisman... right?

Share All sharing options for: Manziel and Te'o: Who Stands Out? 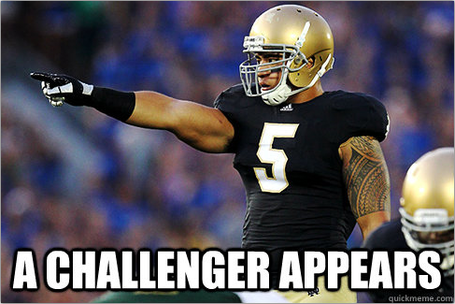 His name has been mentioned as a possible candidate throughout the season, but now with the spotlight off Klein and Notre Dame back on top he's become a finalist for the award. But is it deserved? The Heisman is awarded to an individual deemed the most outstanding player in college football. It's not as cut and dry to compare an offensive player to a defensive player, so let's look how they stack up statistically on their side of the ball.

Our very own SpreadsheetAg did some digging through defensive stats and built the chart below. How did he come about these 7 players? They are in the Top 8 in at least two defensive categories from Top 15 BCS teams.

From this we can see Manti Te'o leads in Interceptions and is 2nd in Solo and Total Tackles. Great stats, but he also has the fewest Tackles for Loss, Sacks, Quarterback Hurries, and Forced Fumbles on that list (NOTE: he actually has 0 Forced Fumbles, not 2). And he's only faced one good offense this season (Oklahoma). In fact, Texas A&M's Damontre Moore leads the group in 3 categories. How do Te'o and Moore compare side by side?

Moore edges out Te'o in 5 out of 9 categories. Granted they play different positions, but this is comparing someone who is considered a Heisman finalist to someone who shockingly isn't considered for ANY major defensive awards this year.

But how does Johnny compare to his peers?

I did my best SpreadsheetAg-like comparison using Total Offensive stats from the NCAA and built the chart below. I took the QBs from the Top 15 BCS teams (if they made the Top 100 in Total Offense) and removed anyone who didn't lead or nearly lead in any category.

From this there's really no comparison. Johnny leads in Net Rushing Yards and Total Yards, while coming in 3rd in Passing Yards. He's 2nd in Net Yardage per Rush, 5th in Passing Yards per Attempt and tied for 3rd in Yards per Play. And he's done it in 8 less quarters than he could have played and against three Top 5 defenses.

In comparison to their peers, Johnny Manziel stands out as a clear statistical leader. Manti Te'o has put up some great numbers and has played very well, but does he stand out as even the best Defensive player let alone the most outstanding overall player? That ultimately is for the Heisman voters to decide, but the facts just don't seem to be in Te'o's favor. Except that he's the best player on the current #1 team in the country.