See how the Mississippi State Bulldogs stack up against Texas A&M’s Fightin’ Texas Aggies in this week's Foundation of Facts...

Texas A&M put the pedal to the floor and didn’t look back against the west division's bottom team, most likely speeding up the eminent departure of Auburn’s Top Eagle, Gene Chizik. This week we will look at how the muddy Mississippi State Bulldogs stack up against the Texas Aggies. 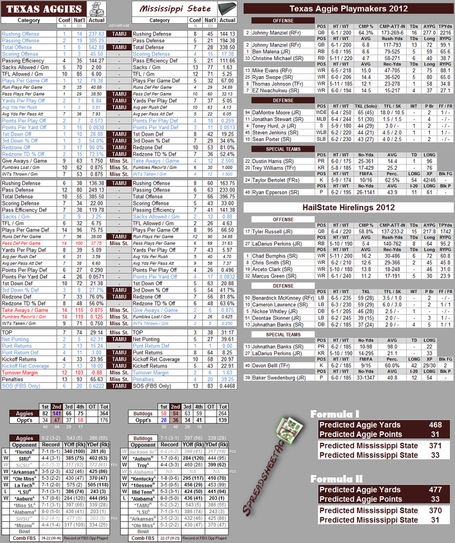 1. I expect Texas A&M to be able to move the ball yet again. We should make a lot of progress on the ground versus Miss St.’s 45th ranked rush defense. If the Aggies can do that, then…

2. The Passing game should open up at some point even against a more-stingy Miss St. pass defense.

3. Again, who has Miss St. played? Two (2) FCS teams, an underwhelming Troy and Middle Tennessee St., the three (3) worst teams in the SEC who have a combined ZERO (0) SEC wins, and then top-ranked Alabama who smashed them 38-7.

4. The Aggies have outgained our FBS completion by 42.3% of their combined average defense (our opponents combine to average 381.4 yards allowed per game, while we average 542.9 per game).

5. Miss St. creates opportunities with turnovers and does not give up the ball much. However, against the one good (great; ranked) team they’ve played, they fumbled four (4) times and lost two (2) of those, and Tyler Russell was intercepted once.

I hope you enjoy this feature and will come back next week to see how the Aggies will fare, statistically, against the Alabama Elephants in Game 10.

LOOK AHEAD: Alabama is 8-0 overall and 5-0 in the SEC. They have the 1st ranked defense at 203 yards allowed per game, and the 41st ranked offense at 436 yards gained per game. They are also ranked 1st in the nation in the following individual metrics: Rushing Defense, Pass Efficiency Defense, Scoring Defense, and Pass Defense. If LSU can get 50 yards through the air and 100 yards on the ground this week, I will be impressed.