THE TAILGATE: A graphical preview of Sam Houston State at Texas A&M

That. Was. Awesome. Like you, we here at The Tailgate are still basking in the glow of Team Johnny Football's incredible win in Tuscaloosa on Saturday. So much so that we almost forgot to produce another edition this week to commemorate our upcoming one-sided game against Sam Houston State. Almost. But if Coach KDS insists that we need to move on within 24 hours, then we have no choice but to comply. And move on we shall. So preheat the oven to 350 degrees, pop open a can of your favorite icing, and let's get ready to feast on another cupcake…TAILGATE style!

Share All sharing options for: THE TAILGATE: A graphical preview of Sam Houston State at Texas A&M 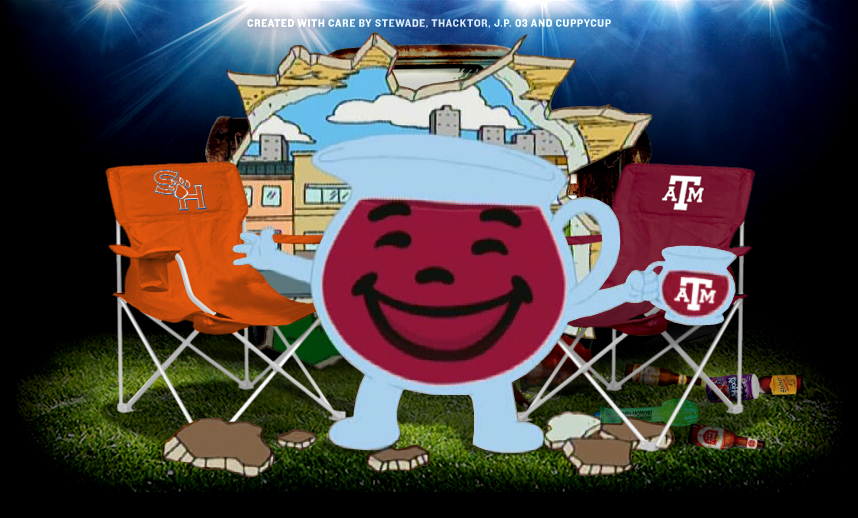 This week, the Aggies go into battle against the Sam Houston State University Bearkats. What is a Bearkat? Well, apparently a Bearkat is something that has entirely too much damn swag. How much swag? Well, put on your headphones and heed my language warning because it's THIS MUCH SWAG!

Part 1 begins when a bunch of Bearkats start filing out of an elevator as if it's a Swaggerific Clown Car. They just keep coming. After we are introduced to what I'll call the Bearkat Swag Crew, we begin to see several examples of what denotes Bearkat Swag in Huntsville. Do you have a cell phone? Oh, you do? MINUS 60 SWAG POINTS! As our friend in the yellow dress illustrates, you must use the dorm hall phone to have true swag. Homework? Well, if you're going to study, you must do it in the bathroom. Our Bearkat friend in the orange swimsuit finds an alternative to a pen when highlighting his textbook. This is now my new party dance. I would keep going, but you just have to watch these.

Do you like the Rodeo? Do you like South Korean rappers who were educated in Boston? DO YOU LIKE COUNTRY HOTTIES?? Well, here you go. Ladies, there's eye-candy in there for you, too. I really can't add to this, it might be the best Gangham Style parody video that nobody saw because, well, the first 13 seconds. Too bad that wave has crested, Sammy. This was well done, except for they really should have called the Bearkat Swag Crew crew to dance with them. If these two groups had a dance battle, the rodeo crew would get served super hard.

ON TO THE GAME PREDICTION

SHSU, I don't know a lot about your team. I'm sorry. I know you're a solid FCS team, that's it. Frankly, I'm not going to research further. If you're upset by this then you clearly lack the emotional fortitude to continue reading my game prediction. Here's a spoiler: lopsided Aggie victory.

Kingsbury and Sumlin lead the team onto the field riding Segways, but they're called SWAGways. Sumlin's has "YESSIR" written down the side and it shoots fire out of the back like Keaton's Batmobile. Manziel goes 300/200 in the first half, returns punts in the second.

For fun, Snyder flips the defense. The secondary plays line, linebackers move to secondary and the line moves to linebacker. Spencer Nealy has a pick six, celebrates by throwing a pizza party in the end zone. Everett has 3 sacks from Nose Tackle. Damontre stares his receiver down until he cries, refuses to run routes.

Dolezal TOTALLY DOESN'T REMIND ANYONE OF ANOTHER GUY ON THE ROSTER. He's seen action in three games as the true freshman #4 HB, and hopefully this is the fourth. A TD would spark the legend.

Ennis led the team in tackles as a DT last week against the "best offensive line in college football" and threw in a sack for good measure. The Huntsville native will show little mercy on Saturday.

DID YOU KNOW time: in addition to clinching the victory in Tuscaloosa, he's also scored on defense this year and is tied for the team lead in both interceptions and forced fumbles. "And he's just a soph-a-more, Verne!" /end Gary Danielson gushing.

Tall. Cool accent. Looks like Jesse Pinkman (h/t to blumby for that one). Add all these up and you've got the Kliff Kingsbury of Huntsville, TX. And he kicks the ball well, too.

It is also the name of this bazooka. Unfortunately, that is the only connection here. But it would be a lot cooler if this was the grandson. Grow your hair, out, dude. Embrace it.

Bookie's been in this secondary a long time, see? And he's already intercepted four passes and one of Nucky's deliveries so far this year. (No, really. He's quite good. Had a 92-yard TD this season.)

Admit it: you've had this weekend circled on your calendar ever since it was announced that Dennis Franchione would be making his triumphant return to Kyle Field. I personally have been licking my chops at the opportunity to lambast the man most responsible for Aggie football's lost decade, and can you blame me? The joke material is nearly endless. Option to the short side of the field. Smoke draw. Field goal Frannie. And who could forget that nasally Yankee voice reminding us that he does this every week, sir!? I still can't believe how wrong we were about this guy. I'll admit that as a student I, too, was sucked in by the excitement surrounding his hire. It's kind of like the excitement Zack and Slater felt when Rod Belding showed up and promised to take the whole class whitewater rafting, only to be crushed when he turned out to be a fraud who bailed on them for a scandalous rendezvous with a sexy stewardess. Sure, Mike Sherman may have seemed a little boring at times, but he was an extremely high-character guy. Dennis may have been flashy, but deep down, I truly believe we got the better Belding.

…Hold please. I'm being told by my editor that while Sam Houston State is technically part of the Texas State System, they actually have a separate football team from the Bobcats that Dennis Franchione is coaching. Which means there will be no Little Debbie wrappers on the sideline this Saturday. Wow, this is awkward. Welp, this section just got a whole lot less fun. Who in the world are the Bearkats?!?

All 317 of us who live in the Metroplex and watch hockey had our hearts set ablaze (not Indiana Jones and the Temple of Doom-style) when it was announced that Dallas Stars play-by-play announcer Ralph Strangis would be manning the broadcast booth for Saturday's game. Sadly, legendary wingman Daryl "Razor" Reaugh won't be joining him, but I'm still pumped. Why is Ralph available on Saturday, you ask? Because the NHL is locked out. Again. Seven years after canceling an entire season to reconcile a labor dispute that apparently isn't so reconciled. Oh well. Literally dozens of people are devastated by this news, but hockey's loss is every Aggie's gain. Be sure to tune in for a glimpse of greatness, or mute it and roll the dice with Dave South (relive his Alabama greatness here).

The Host(ess) with the Most(est)

Alright Ags, here is your chance to shine. Not everyone is going to want to shell out 40 bucks to watch the blowout on Saturday (although if 99,598 people do, we can make the same $3.9 million that the LHN generated for the Texas athletic department in its first year in only 3 hours, so we've got that to shoot for), so my advice is to assume the role of hero and host your own watching party! Jump on Pinterest for some amazing decorating tips or perhaps a new recipe. Just resist the urge to try TOO hard to impress your guests, particularly in the in-game humor department. Remember, the best jokes are subtle. For example, after Bearkats RB Tim Flanders gets stuffed by Spencer Nealy for the umpteen-milionth time, who wouldn't appreciate a nice "man, that guy suck-diddly-ucks?" But that's where I draw the line, which means it's time to ix-nay comments such as, "Johnny really took a GAMBLE by throwing it toward (Bearkats CB) Bookie Sneed!" And whatever you do, resist the urge to make a Bell-dozer joke if SHSU runs any quarterback sneaks. You can thank me later. 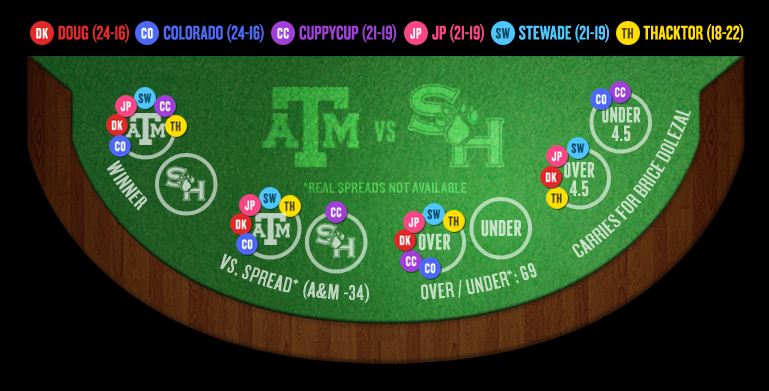 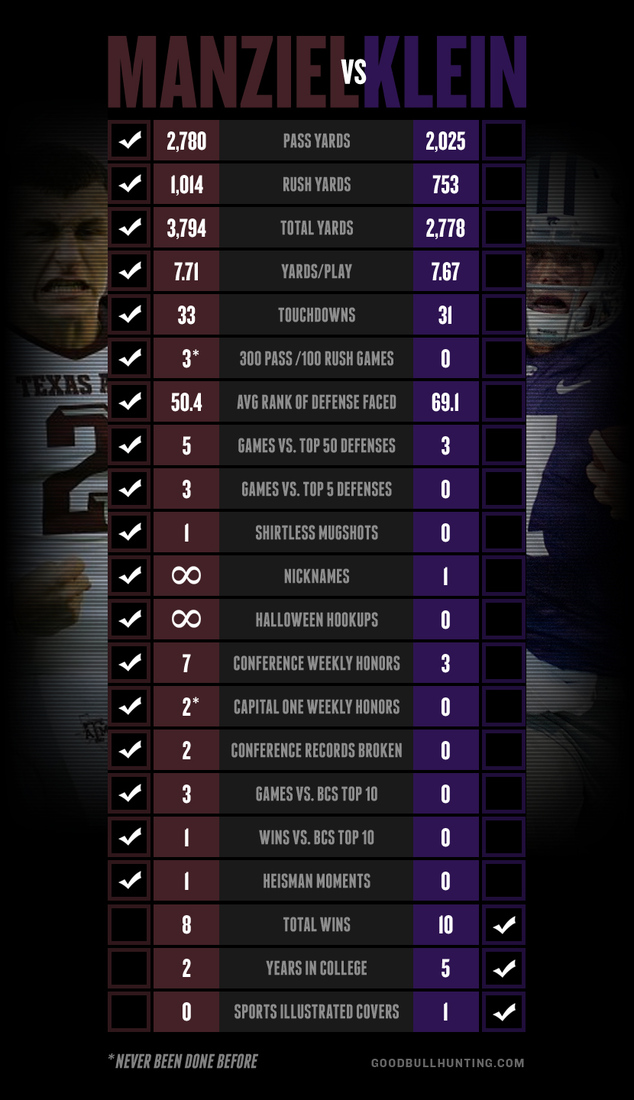 Bandwagons full.. but yall can run behind it #gigem

Johnny Football played a great game. Very impressive. He's a strong candidate for the Heisman. Nothing but respect. I WAS WRONG on this one.

Sam Houston going to beat a&m next week though...... #EatEmUpKats

Everyone is doubting #SHSU but in 2007 Appalachian State beat number 5 Michigan...#BearkatNation

Sam Houston gonna shut up College Station next weekend. Sorry about it #BearKatNation