SEC Defenses Are Failing to Adapt to Manziel

Before Texas A&M and its prolific offense entered into the SEC, folks around here had a certain way of playing defense. They are stubborn and entrenched in their ways. When a new kid on the block shows up, they either have to adapt or they die. So far, Manziel has been assassinating them one by one.

Share All sharing options for: SEC Defenses Are Failing to Adapt to Manziel

Nick Saban and Kirby Smart, the Lords of Defense, are complete idiots. Fools. Ignoramuses. (For our Bama friends, an ignoramus is a synonym of idiot.)

You see, the SEC has an established way of playing defense. And because SEC coaches are like a family committing incest (Coaches on previous Saban staffs include Will Muschamp, Derek Dooley, and John Chavis somehow), they all do the same thing. This defined style includes playing press man coverage. Now, press man coverage can be very effective in disrupting even the best passing attacks. But its one kryptonite is a scrambling quarterback. And when a new kid on the block shows up like Johnny Manziel with all of his fancy PlayStation moves that are too difficult for Old Man style football to defend, you would think some of the best and brightest defensive minds in the game would change and adapt. HELL. NO. While Finebaum worshipers are too busy calling in asking PAAAAWWWWLLLLLL. PAWL. HOW COME WE DUN'T RUN THAT FUTBOL PAWL. WE RUNT THAT FOOTBALL PAWL WE WOULDA WON THE DAMN GAME PAWWWWWLLLLLLL and berating Tim Brando because he is an LSU homer, what they really should be asking is why the best defensive playcaller on the field on Saturday was Texas A&M defensive coordinator Mark Snyder. 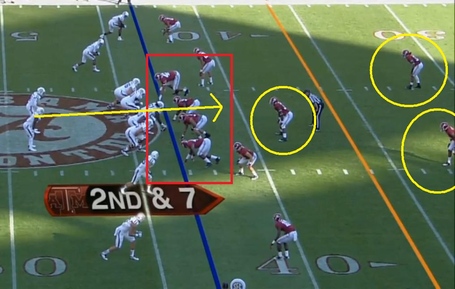 Just look at this defensive set up on the first drive of the game. Texas A&M comes out in their fancy spread formation with *gasp* four wide receivers. Kirby Smart counters with what really is a dime look -- four down lineman, four defensive backs on each receiver, a linebacker in the middle of the field and two deep safties splitting the field. Well, by game 10 of the season, Johnny Manziel and the rest of the offense has learned that when you have more blockers than defenders in "the box", run the football. Today, that red box is going to be a very bad sign for Alabama. Now, Alabama is trying to pretend like they have seven men in the box as two defenders are playing between the wide receivers in the slot and the line of scrimmage. But the defensive call is simply man to man defense with two high safties. So those two defenders pretending to be in the box will really run with the receivers after the snap. This leaves just 5 defenders to play within 10 yards of the line of scrimmage -- those four down lineman and one linebacker. The Texas A&M offense? They have 5 good lineman of their own plus Ben Malena as an extra blocker on a QB draw. And that is exactly what the offense will check to. 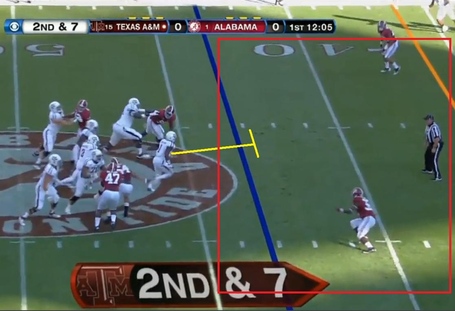 Once Johnny fakes the pass and takes off running, just look at the open space vacated by the Alabama defense highlighted by that dreaded red box. With Ben Malena blocking out front, the closest person to making this play is really that poor referee. 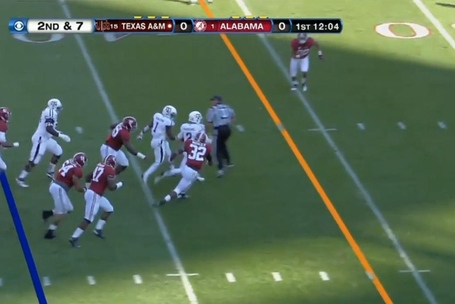 What, you thought I was joking? The umpire was really the closest one to stopping Johnny on this play as he rushes for a cool 29 yards to the 14 yard line on second down setting up Texas A&M's first touchdown of the 1st quarter. 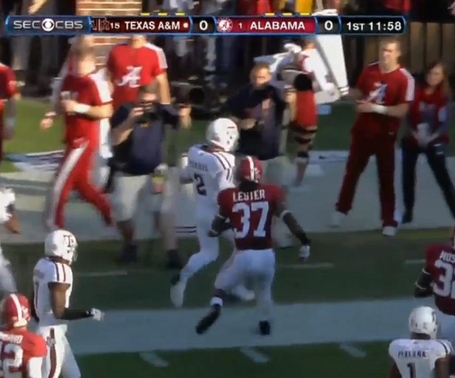 Say hi to the 'Bama cheerleaders Johnny. They will want the number of a Heisman Trophy contender that slaughtered Saban's defense on national TV. Yeah, I'm talking about the dudes. There ain't no lady folk in that frame. 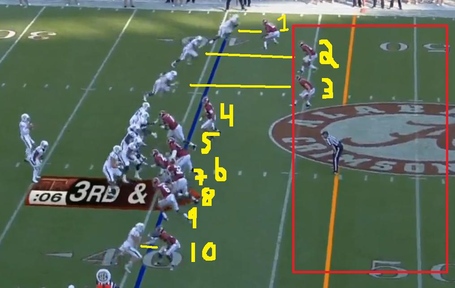 So you would think after that pathetic performance on the first drive of the game, Saban and Smart would come together and decide to adapt their defensive strategy. Nope. It gets worse.

On this third down play still in the 1st quarter, A&M lines up once again in that disturbing spread formation with trips to the left. Since it's 3rd down and because nobody can compete with Alabama, Nick Saban lets his Napoleon Complex get the best of him and decides to go YOLO. He decides to send six players on a blitz against the Aggie's six blockers. He once again has four men playing the characteristic press man coverage in a Cover 1 look. This means that there is a safety not pictured on your screen playing centerfield making sure nobody gets behind him for a huge gain. In between the 10 defenders I counted at the line of scrimmage using MS Paint (no really, that is what I use) and that lone safety playing deep, there once again is our friend the big red box. Now against the Mississippi States and LSUs of the world, the idea of this call is to stall the pass routes from developing so the quarterback holds onto the ball a millisecond longer than he usually does allowing the blitzers to sack him. That works against the statue quarterbacks of the SEC like Zack Mettenberger. Not against mister XBOX360 Johnny Manziel. You see Johnny will take off running to the left, picking up the first down and much, much more. 32 yards on this particular play to be exact.

But there is so much SEC speed on the field Ranger! Why can't they bring Johnny down for a short gain? Well, after Johnny evades the six blitzing defenders, those defensive backs have their backs toward Johnny covering the receivers, having no idea he scrambled out of the pocket. Until they have figured out the quarterback is scrambling, Johnny has used his better-than-everyone-elses SEC speed to pick up 20 yards. This is the one huge problem with constantly using man coverage against Mr. Manziel. 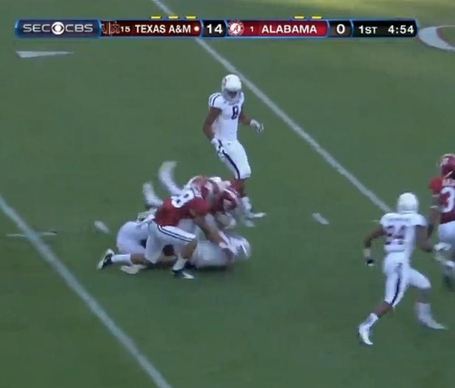 20 points against Alabama in the first quarter alone? Texas A&M had established a resounding lead before Saban and Smart could adjust and before Bamers taking in the game from the stands could dig into their overalls and pull out that flask. 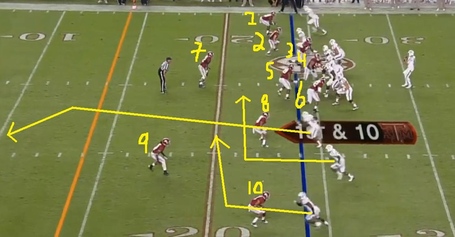 So what happened after the first quarter? Why did the offense slow down? Well, you can't really pin it on any particular Alabama adjustment. The boys on the sideline didn't outsmart Manziel; the players on the field became more aware of Johnny's capabilities and adjusted their game and talent took over. Same thing against Florida and LSU -- defenders stopped rushing Manziel, waited for him to run, and used better angles to bring him down for short gains. To beat elite defenses, Manziel has had to develop the second part of his Heisman game -- an accurate downfield passing attack. He didn't have it against Florida in that second half and wasn't quite ready for LSU. But against Alabama? He and the Texas A&M receivers led by coach David Beaty were ready to finally win a close game.

Check out the diagrammed play above. The Alabama defense really isn't doing anything different against this trips formation than they did on the previous play. They are still playing that press man coverage with one lone free safety not pictured and 10 defenders within seven yards of the line of scrimmage. They won't blitz here in the 4th quarter and the four down lineman and one linebacker have become very aware of Manziel's scrambling abilities, barely rushing at all but instead being alert to him taking off. This means the wide receivers will have to break the press man coverage, get open, and have Johnny beat the defense with his arm instead of his legs.

Now this play isn't new for the Texas A&M offense. In fact, it is the same exact play they used to beat Ole Miss. The two outside receivers to the bottom of the screen will run short five yard dig routes back towards the middle of the field, keeping their defenders close. The most inside receiver, Malcolm Kennedy, will run a downfield corner or flag route toward the sideline. I think you know how this one ends. 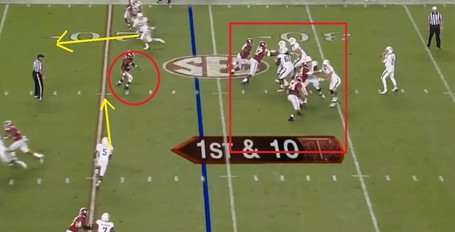 Yes, Kennedy will catch this ball for the game winning touchdown. But I want you to respect a couple of things on this play. Look at our friend the dreaded red box. See the clean pocket for Manziel? Those Alabama lineman aren't really rushing but ready for Johnny to take off running. Not here. Also look at two other open options Manziel had on this play. Johnny could have went with the open Kenric McNeal running toward the middle of the field. He could have also went with the reliable Ryan Swope who has an open look down the seam between the spying linebacker highlighted in red and the free safety over the top not shown (that is, before Swope is tackled by Sunseri resulting in no flag). Swope will cause that free safety to cheat towards his side of the field, leaving the Kennedy corner route open if Manziel can make an accurate pass. 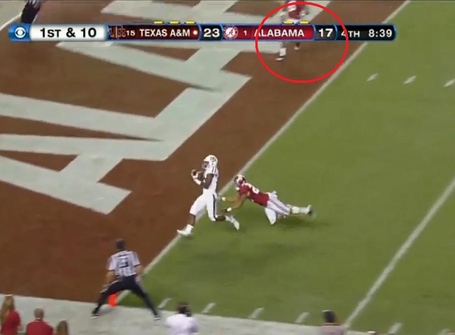 And for Alabama, it is a shame that Johnny's most improved aspect of his overall game between this spring and until now is his accuracy on downfield passes. Manziel hits Kennedy in stride like a senior. The most dangerous player in college football? If we continue to see accuracy like that from Manziel, it will be the Texas A&M quarterback for the next couple of years.

Okay, so how should teams be playing Johnny Manziel? Simple. Zone Coverage. This allows everyone, from linebackers to corners and safeties, to keep their eyes on what exactly Manziel is doing in the backfield. This would limit his large scrambles which he has become known for. Of course, everything has their drawbacks. Kliff Kingsbury would love to call plays against zone coverage, picking apart a defense as his offense moves down the field. But it would test Manziel as a true passer this early in his career. Pick your poison. As Manziel continues to develop as a passer, hopefully he reaches a point where he can dissect any coverage making him truly indefensible.

It will be interesting to see how SEC defenses adapt to not only Manziel but the Texas A&M offense in general in the coming years because this press man coverage thing just ain't working. Yet, even the best coaches in college football are too stubborn to adapt and want to stick to their guns that have won national championships in the past. Does Texas A&M have the power to change how the SEC plays defense? Yes. At least they better do something because Texas A&M led all 180 minutes of their three game swing through Alabama and Mississippi, emptying two stadiums by half and almost doing the same at Bryant-Denny Stadium if not for the talent Alabama put on the field.