CAN YOU BREATHE YET???? I CAN'T. THANK GOD I'M TYPING THIS AND STILL COHERENT. TEXAS A&M DEFEATS THE DEFENDING NATIONAL CHAMPION ALABAMA IN TUSCALOOSA 29-24. LET'S TALK ABOUT IT AND STUFF

#YESSIR -- First off, let's give Kevin Sumlin his due. Ten years ago yesterday, Kevin Sumlin guided the Texas A&M offense to a win against #1 Oklahoma at Kyle Field. Tonight, he led the Aggies to win against #1 Alabama in Tuscaloosa against Satan himself, Nick Saban. What can't the man do? He and his coaching staff has taken a team that was 7-6 last season in the Big 12 and missing their NFL Top 10 Draft Pick quarterback and all-time leading receiver. He was bringing in a new Air Raid offensive system to which the Aggie players weren't recruited for. And while it might have been okay in the Big 12, his squad would play their first season in the SEC, a league in which they should win but 5 games. These seniors weren't recruited to play for Kevin Sumlin. They weren't recruited to play in the Air Raid or Mark Snyder's 4-3 Under defense. And they weren't recruited to play in the SEC. They didn't have to buy into the coaches. They didn't have to care about this season.

But everyone was all-in from the get go. Every single person in the football department responded and stepped up. It wouldn't be easy, but when is it ever for Texas A&M? It takes one hell of a coach and staff to get players acclimated to not only a new scheme and new conference this early. But Kevin Damn Sumlin was the man for the job.

A NIGHT TO REMEMBER FOR THE SENIORS -- Let's go back to those seniors real quick. Man, talk about a game for them. Spencer Nealy giving hell up front all game. Ryan Swope making not one, but two critical hits when he knew he was going to get hit. Dustin Harris on punt return and in coverage. Kenric McNeal had a huge catch over the middle to start the game. Christine Michael with two touchdowns. Patrick Lewis making the line calls. Jonathan Stewart in the middle of the defense. Steven Terrell with a huge forced fumble. Sean Porter being the leader of this defense all year. I hope I'm not forgetting anyone. Everyone played up this game like it was Johnny Manziel's stage. But it wasn't his stage tonight. It was the senior's stage. And they delivered their best performance yet. Want to live in A&M lore? Congrats guys, they will bring you back for years to come at Kyle to celebrate this victory, and you deserve it. Like I said before they didn't have to buy in, but they did and have led every single player on the A&M roster to success. They have shown the way to greatness for Texas A&M.

AND NOW A SHORT QUESTION AND ANSWER SESSION --

Q: How spectacular was Manziel tonight?

A: He just bought himself a ticket to New York in early December. He may not win it because of losses to Florida and LSU, but he is the best college football player in the country. I was concerned early in the second half though. I thought he was getting a little too much happy feet too early in the pocket, but in the middle of the third he settled down and that big third down completion to Swope set up the rest of the game for him not as a runner, but as a passer. That is what caused us to separate and find resurgence in this game.

A: Good question. Just like last week in Baton Rouge, I thought Alabama put too much on McCarron. Now I'm a firm believer that McCarron is the best QB we've seen all season. But Alabama was dominating us at the line of scrimmage and wearing us down. Huge mistake to move away from it in my opinion, but whatever. The secondary broke a couple of times but Deshazor Everett, Steven Terrell, and Howard Matthews made huge plays in this ball game to either kill Alabama momentum or create turnovers.

Q: Those officials sucked didn't they?

A: Yeah but that should have been expected from every A&M fan coming into the game. Alabama gets the calls at home. But toward the middle of the third and in the 4th quarter I actually think it was Texas A&M that was getting the spots and calls. Texas A&M walked into Bryant-Denny and beat not only Alabama's best 11, but the SEC referees, and Gary Danielson.

Q: I would say the Texas A&M Receivers won this game for the Aggies. Agree?

A: Yes. HELL YES. Against Florida and LSU the receivers lost the game for us, failing to create separation. Tonight was a different story. Alabama kept using man to man coverage and the receivers finally responded. Mostly Ryan Swope, but also Malcolm Kennedy on Johnny's last touchdown throw. But major assits from Manziel on locations of those passes. A lot of coaches will get credit tonight but David Beaty deserves a ton as well.

Q: Mark Snyder's adjustment to move Neely to over center as a nose -- Discuss.

A: Totally disrupted the Alabama run game. I thought if the Texas A&M defensive line could get penetration we might survive the night. Nealy did it by himself over All-American center Barrett Jones. Both Lacy and Yeldon are good enough to then cut back, but Nealy gave our defense a chance in this game. Another senior that is really the star of the game.

Q: What do you think will happen to that poor Alabama player that jumped in the neutral zone to end the game?

A: Yes, the one we have been waiting for a while. I thought it might be Oklahoma State last year. Florida and LSU this year. But I'm glad it was this one. This one was soooooooo sweet. If you are a young high school athlete in the state of Texas, I wouldn't you want to play at Texas A&M? Coach Sumlin, the schemes, the fans, the SEC, Johnny Football, the girls, Scooby-Doo costumes, family. We have it all right now. You'd be foolish not to. Texas A&M will win a national championship soon. Yes I said it. Better be a part of it.

But seriously, it's time to close with 10 wins.

SEPTEMBER 14th, 2013 -- Alabama's revenge game at Kyle Field. A few of you should start tailgating already

AND IT'S TIME FOR TEXAS A&M 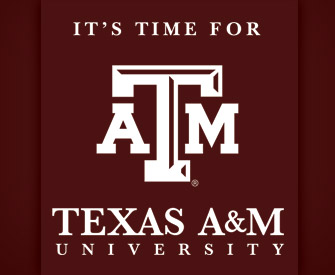