The Aggies on Saturday square off against a solid Mississippi State squad in #SNOWBOWL12 (with a high of 77 degrees) to find out who is the third best team in the SEC West behind Alabama and LSU. What's the match-up of the game? The Aggie defense versus the Bulldog offense.

Share All sharing options for: Aggie Defense Key to Win at Mississippi State

Usually in this weekly feature, I take a look back at the previous game and try to highlight a particular play or diagnose a certain aspect of the game. Well, when you win 63-21 on the road there really isn't much to talk about. It would be a Johnny Football love fest up in here and I think we've had a few of those already. Although I do have to credit Kliff Kingsbury and the offensive playcalling last week; I was critical of it the week before but he put my concerns to rest with his mix of run and pass calls which set up the play-action which Manziel thrived on. Kudos to you, sir.

So I'm taking a little different approach this week -- let's look ahead to the showdown in Starkville as Texas A&M faces Mississippi State in #SNOWBOWL12OMGTHEMAYANSWERERIGHTGLOBALWARMINGANDSTUFFHASHTAGSEVERYWHERE.

First off, let's talk about the offense of Texas A&M versus the defense of Mississippi State. The Bulldog defense as a whole is a solid group and ranks 15th in the country giving up only 17.4 points per game. They aren't an overly talented group; they are just solid in what they do. They tackle well and also create turnovers. So far this season, they have created 20 turnovers -- 12 interceptions (8 by two players Johnthan Banks and Darius Slay) and 8 fumbles. The strongest part of their defense is the secondary; they are a physical, long, and athletic group as both the previously mentioned Banks and Slay go 6'1" each. If the Aggies plan to be successful on Saturday, it's going to be up to our receivers to beat their talented cover men one on one. If they don't, it will be a struggle for the offense and a low-scoring affair which will favor a Bulldog win.

The true match-up in my eyes is our defense versus their offense. If we plan to win the game, we will have to limit their ball-control approach. They aren't necessarily dynamic in what they do -- they will try to dink and dunk their way down the field while trying for a 20+ yard pass every now and then. But just like their defense, they are well coached and solid fundamentally. That is what makes them dangerous. Enough talking, let's take a look at what they do. 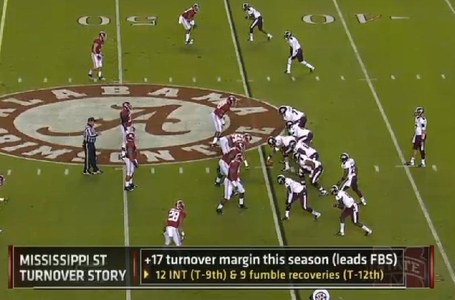 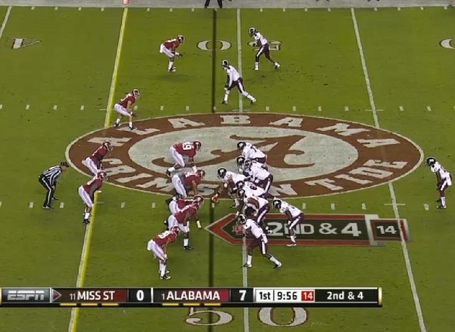 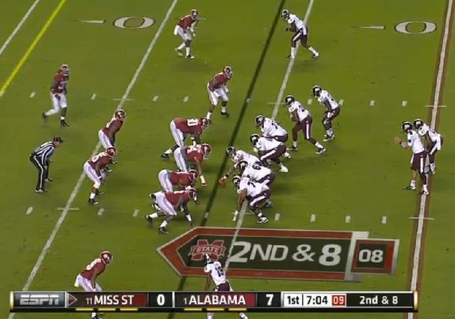 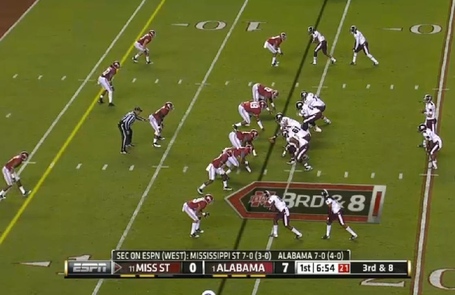 Notice the trend in those first four pictures? First, Mississippi State will come out in single back formations the entire game. They rarely use any type of fullback that is lined up in the backfield with a runningback, #27 LaDarius Perkins. They have a unique design to their power run game in which they use pulling guards and what I'll call an H-back (#23 Slyvester Hemphill) which is similar to the San Fransisco 49ers style of play. More on that later.

More importantly, they like formations in which players are bunched together as seen above. They will bunch receivers, tight ends, and the H-back to the right or left of the offensive line. All four of the plays above ended up being called pass plays. I believe they like these formations for two reasons: 1) this allows them to help pass block by either staying in max protection where those bunched players don't release into passing routes, or when they do release into passing routes, chip the defensive ends to slow their rush down; 2) their offensive players aren't very dynamic as I've mentioned. They are big bodied players who are more possession type receivers. This means they have trouble creating separation at times from defenders and need help getting open. If you bunch players together, sometimes you create natural "picks" or "rubs" where defenders lose their man by being "tangled up" with other receiver's pass routes, other defenders, or just simply lose track of who they are supposed to be covering. This helps their players get open. In the first three plays shown, the quarterback Tyler Russell dumped the pass down to a receiver in the flats for a 5 yard gain. Nothing overly complicated, but this is what they are limited to; dinking and dunking down the field with a ball-control offense. 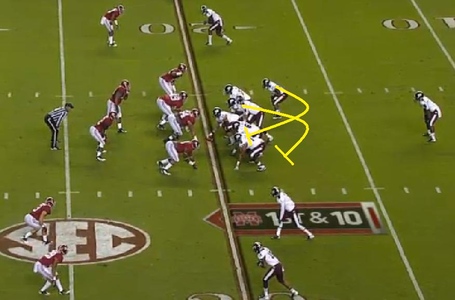 Now let's talk about that power run game. Pictured above, Mississippi State will come out in that single back look with the H-back Hemphill lined up outside the right tackle. On this play, the right guard #67 Tobias Smith (pre-season All SEC) will pull to kick out Alabama's defensive end and Hemphill will run right behind him into the hole created as a lead blocker for the running back. 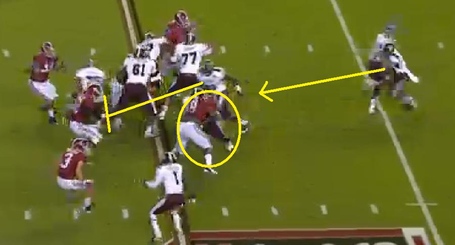 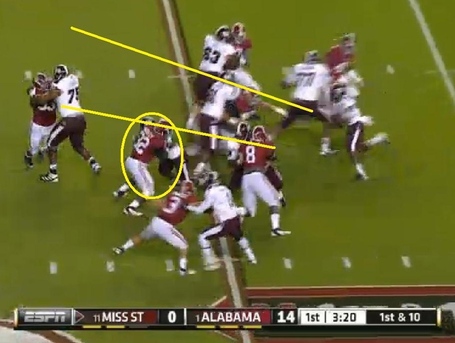 and with a great block on the filling linebacker, there is a nice running lane to pick up an easy 9 yards against the Alabama defense. While they may not be dynamic, Mississippi State is a great fundamental football team that knows how to put a hat on a hat and block until the whistle. To be successful against this offense, the Aggie defense will have to be quicker off the line than the Bulldog blockers and stay low, creating havoc in the backfield (which Alabama did later in the game) and also the linebackers must be able to fight off these lead blocks which we have struggled against so far this season. 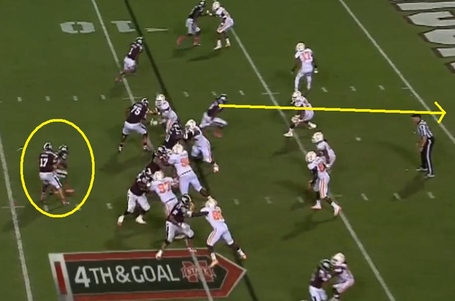 The other thing you have to watch for against Mississippi State is the zone read. Once again this isn't a dynamic play for them; they want to see if you are defensively sound and if you are not, you will pay. However, one thing they do well off the zone read is the pass option. Here against Tennessee a couple of weeks ago, they had two touchdown passes off this play. Even on a fourth and goal from nine yards out, Tennessee's linebackers bite on the run fake in the backfield. This allows the receiver who once again was line up right off the offensive line to get behind the linebackers. 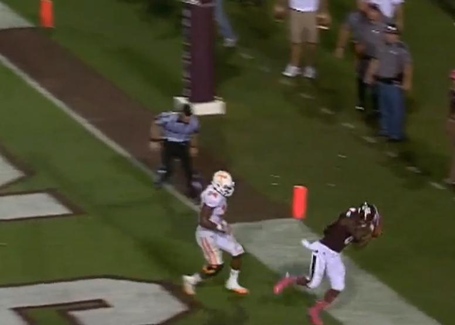 And when he does, it's an easy touchdown throw for Tyler Russell. It's not fancy, its just Mississippi State taking advantage of poor defensive play.

One sneaky thing Mississippi does do is run some "wildcat" plays with its redshirt freshman QB Dak Prescott. Being an actual QB, you must watch not only the run, but the pass off a run fake as well. (Yes, Tennessee fell for this too resulting in a touchdown) 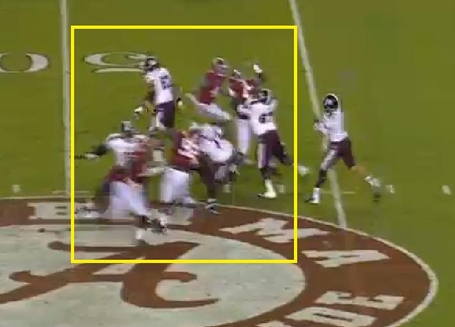 Finally, I have to give some love to the Mississippi State QB Tyler Russell. I liked watching this guy on film. He is a big bodied guy who is accurate with his throws. Won't wow you with his arm, but he knows the offense and makes the right throw a majority of the time. He is a game-manager if you will. What I am most impressed about with him is his ability to stand in the pocket, step up, and make a throw. He doesn't let the pass rush bother him. Take the above image for example. Alabama is just bull-rushing the Mississippi State offensive line and Russell just steps up right into it to make a 30 yard throw down the sideline. It's going to be very hard if not impossible to "rattle" Russell with our pass rush. Damontre Moore and company have been stellar so far, but this will be a good test to see just how effective our pass rush can be and if we can bail out our secondary who will be facing big bodied receivers who are sure pass-catchers.

Overall, the passing tree for Mississippi State isn't complicated. Russell with make about four throws you have to watch for. The 5-10 yard out or hook towards the sideline, the 10 yard dig over the middle of the field, the 30 yard pass down the sideline to #8 Chris Smith (think of how we used to use Jeff Fuller and you have an idea of Smith's style of play), and the previously mentioned pass over the middle of the field after a play action down the seam. That is about it, but Russell and company execute it well.

Overall, Mississippi State isn't hard team to scheme for. They aren't going to trick you with anything they do. They just execute everything they do well. This will be a great test to see how far our defense has come under Mark Snyder and the rest of the defensive coaching staff; if we are sound fundamentally, we should have an easy day against this defense. Play poorly with bad technique and get out of position, and it's going to be a long day and a high scoring affair.