See how the Ole Miss RebelBearAckbars stack up against the Texas A&M Aggies in this week's Foundation of Facts...

Share All sharing options for: Foundation of Facts: Texas A&M vs Ole Miss

What is it that makes me love stats so much? I was in real disbelief last week when I saw what the formulas predicted for the final score. I mean, I knew that Arkansas was down this year, but they are still very talented and I thought that surely our defense was an anomaly (Battered Aggie Syndrome; we've been down, duped, and delirious for so long it was just hard to believe we actually had a good defense). So when the predictions were 46-10 and 47-12, respectively, I was apprehensive to post the Arkansas Foundation of Facts chart at all...

BUT THE AGGIES CAME THROUGH! The defense performed superbly and, even though they sieved yards to Arkansas in the air and didn't get to Tyler Wilson much, they made the stops that counted in the red zone.

Odd Question of the Week: Who are the top 5 teams in point differential per game in the FBS? You may be surprised by a team or two (go to the bottom for answer). 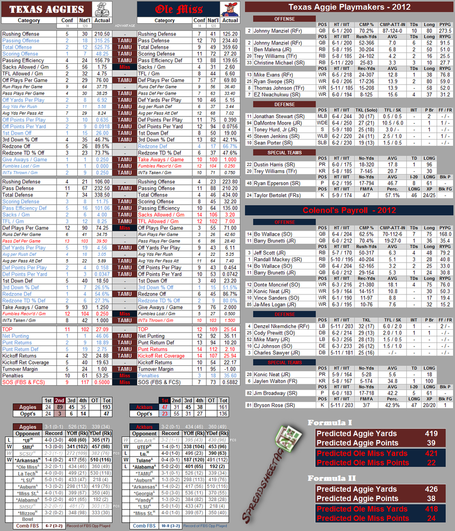 1. This should be another pass-fest from Johnny Football; see the Ole Miss pass defense and scoring defense; this after facing juggernauts Central Arkansas, UTEP, and Tulane.

2. The RebelBearAckbars best quarter is the 1st Quarter and their worst is the 2nd Quarter. The Ags on the other hand, have had superb 2nd and 3rd Quarters; not allowing a single touchdown all season in either the 2nd or 3rd Quarters. Add to that the fact that A&M has played alot of 2nd and 3rd stringers in the 4th quarter and that probably accounts for one of the TDs there... So if you think about it, A&M 1st Team Defense has only allowed a single (1) Touchdown in the cumulative 2nd, 3rd, and 4th quarters this season... wow.

4. Turnovers... A&M just doesn't do them. Our Backup QB threw 1 interception this season. That's it. We've "fumbled" the ball 7 times, but recovered each one ourselves. Ole Miss is -1 in turnover margin giving away 2 per game and taking 1 per game on average. Bo Wallace has thrown 6 interceptions in 5 games.

6. Ole Miss has just as many people running with the ball as the Ags do; but they don't have Johnny "Football" Manziel. Jeff Scott needs to get more carries, he averages 10 per game, but 6.3 per carry... questionable decision-making by the Ole Miss staff there. Has the Aggie defense faced a mobile quarterback like these 2 before? Maybe Florida's Jeff Driskel?

I hope you enjoy this feature and will come back next week to see how the Aggies will fare, statistically, against the LaTech Bulldogs in Game 6.

Answer to Odd Question of the Week: Adjusted for FBS opponents only and on a per game basis:

LOOK AHEAD: Louisiana Tech is 21st in Total Offense, but 5th in Scoring Offense. They haven't scored less than 44 points in any game, but their opponents have lacked any credibility (UH, RIce, Illinois, Virginia). What LaTech has in its prolific offense is made up for by a horrendous defense: 118th place allowing 530 yards per game (162 on the ground and 369 through the air) and allowing 24 points or more in every game (UH scored 49!). Mike Evans, Ryan Swope, and Thomas Johnson are licking their chops at the though of facing a worse secondary than Arkansas (hello 500 yards passing version 2.0)! Maybe Johnny Football can set an NCAA record afterall?