THE TAILGATE: A graphical preview of Texas A&M at Mississippi State

Another week, another tough SEC road test. And another opportunity for a superior matchup to be relegated to an 11 am start so our precious in-state former rivals can have the 2:30 time slot all to themselves. In case you hadn't heard, this week's matchup has some history. The last time these 2 teams met, the Aggies choked away a sure victory in Shreveport. Eerily ominous for the decade that was to follow, but as Mark McGwire famously said, we're not here to focus on the past. We're here to talk about the present; specifically, the presents we hope Johnny Football leaves under our proverbial trees this weekend. So without further ado, grab some hot cocoa, throw some hand warmers in your mittens, and pull up a chair for an ice-cold edition of the tailgate!

Share All sharing options for: THE TAILGATE: A graphical preview of Texas A&M at Mississippi State 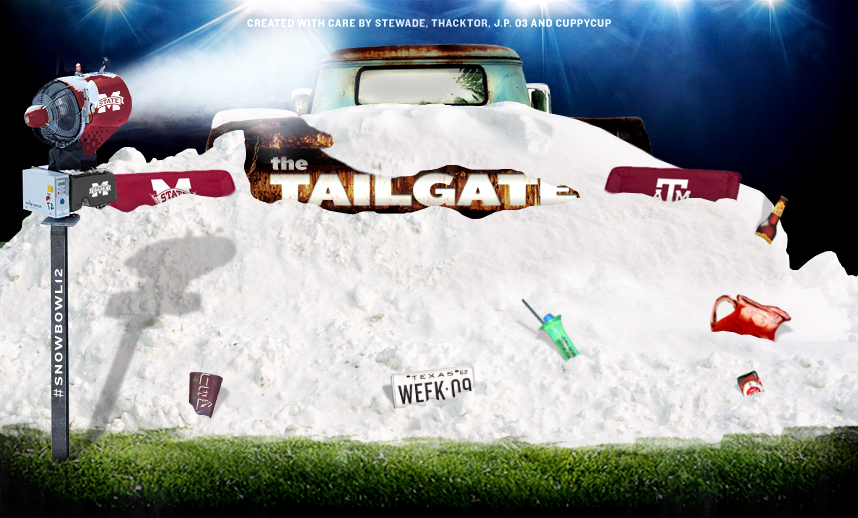 The Battle for Jackie's Affection

In the SEC, two teams got our sloppy seconds in the coaching department: Alabama and Mississippi State. The difference between the Bear and Sherrill is that Sherrill made his name at A&M and Bear did the Junction thing and went on to win championships at Alabama. Now, I guarantee you that Alabama fans won't make the upcoming game with A&M a huge to-do with Bear Bryant because, clearly, he belongs to Alabama. Not Mississippi State, though. Oh no. They want to remind us that the coach we used to have beat us in a bowl game 11 years ago...AND IT SNOWED AT THE GAME! There's even a cute hashtag adorning their end zone that reads #snowbowl12. A quick gander at the Starkville, MS 5 day forecast will tell you that there will be less than no snow at this game, so I'd consider that a misnomer of the highest order. It's also a conference game. Whatever it takes to hype a division game between two ranked foes in the SEC, right? I mean, we're not the Big XII here in the SEC. This conference lacks depth.

The Mississippi State Bulldogs will come out in their commemorative #snowbowl12 uniforms on Saturday, but I'll let JP03 tackle that. The gist of the idea is that they're all white from head to toe. The problem here is, they already have trouble running out of the fog in their team entrance. In that photo, every player is in their bastardized maroon. I don't know if you could get more contrast to the white smoke. Imagine the problems when you CAN'T DISTINGUISH HUMANS FROM FOG?!?! That's 10 easy pregame injuries right there and we haven't even kicked off yet. Your move, Miss State. Your move.

But we haven't even begun to think about the implications of beings not of this world on our trite little football game yet, have we? I love this. Who doesn't love aliens, man? The History Channel's programming lineup attests to the fact that we shouldn't be concerned with matters of proven history, but answering questions with vague statements that prove alien life has affected our lives here on earth. So here are a few. If it were true that A&M couldn't compete in the SEC but now is competing quite well, don't we have to ask Kevin Sumlin for his intergalactic birth certificate? If he can't produce one, he's obviously an alien. Johnny Manziel is 6' on a good day, yet outclasses athletes who were ranked higher on recruiting sites on a weekly basis. Why hasn't he addressed the fact that aliens may have altered his genetic code in the offseason? Just asking questions here.

And now an argument for or against cheerleaders, depending on your stance. Young Taylor seems to have beaten the odds here by overcoming living in the fattest state in America and posing for Playboy. I smell an uplifting story of triumph here, Hollywood. Maybe this could be the subplot to "Air Bud XXVII: Dramatic Paws." HOW CAN THE DOG CATCH A FOOTBALL? HOW?!?! Well, some lucky Retail Floristry major from Miss State can likely win this girl over with his Senior Thesis. "I put these in a vase for you. It took me all of Monday early afternoon."

Jackie Sherrill tosses the coin, which is double heads and Sumlin knows it. Sherrill tears off his suit revealing that he is wearing an A&M "greenman" onesie and proceeds to pelvic thrust at the Miss State student section from the 50 yard-line. After a 30 minute delay to cart off all 20 Bulldogs injured from running through INVISI-FOG, the game starts off a little slow. JFF only amasses 200 yards by halftime and Kingsbury is visibly upset by the mere 21 point lead the Aggies have accumulated by halftime. To further illustrate this point, Kingsbury comes out at halftime in an even blacker coach's shirt than in the first half that reads "Hi TexAgs!" on the back.

Not a fan of false advertising, Sumlin calls God and demands snow. The impending blizzard stalls the Miss State offense, but seems to empower Johnny Football who inexplicably has a snow board. He becomes the first football player to score 3 touchdowns and pull off the very difficult 960 ollie-twist-kick while reaching for the pylon. ESPN says "Meh." Kevin Sumlin makes a snowman, but places the carrot and lumps of coal in the lower hemisphere of his creation.

Mississippi State’s punt coverage has been outstanding this year, which means Dustin will either muff one through the end zone or finish with 120 return yards and a TD. Nothing in between.

Hurd will need to step up as an extra DB to help the linebackers with a very effective TE in Marcus Green. Hurd is the perfect candidate for the job because he knows how both cover and tackle. A dual threat guy in the secondary.

Without any real established pass rusher to face, the tackles should be fine in this game. It’ll be on Lewis to anchor the middle and establish a solid pocket for Touchdown.

Perkins has been a consistent rusher all season, but it’s still only good for #2 in the SEC behind a certain quarterback whose name rhymes with "Ronnie Cantrell."

Brewster graciously stepped in at the last minute to be the wide receivers coach when there was a sudden vacancy this summer. His previous engagements included serving as a verbal punching bag for Gus Johnson on FOX and reversing years of hard work by Glen Mason at Minnesota.

Broomfield was doing that lockdown corner scoring touchdowns thing too for a while that teammates Banks and Slay are up now before being moved to safety this year. Excels at diagnosing the "sweep" play.

Yet Another Measuring Stick Game

Finally, a chance for the Ags to prove ourselves and see how we stack up against an elite SEC team like Mississippi State. Sigh. Look, I get it. We're all getting tired of hearing about how THIS is the week A&M is gonna go out and really prove that we belong in our new conference, only to come up just a bit short at the end (or just flat-out give the game away, however you choose to look at it). But something feels different about this one. Besides, everyone knows that the third time's a charm. Just ask Texas legend Sam Houston, whose third wife Margaret Lea supposedly convinced him to stop drinking and join the Baptist church. Or Ernest Hemingway, whose third wife Martha Gellhorn inspired him to write For Whom The Bell Tolls, arguably his most famous novel. Wait, why am I bothering to make literature analogies when people from Mississippi are going to be reading the column this week? Moving on…

A Game Decided by Kickers?

If you consider yourself a fan of either team, you'd better hope that the score isn't separated by 3 points or less in the final minutes of this contest. Unless, of course, your idea of fun is putting the weight of an entire fan base on the shoulders of either team's freshman kicker. Texas A&M's walking heart attack Taylor Bertolet is hitting 62.5% of his field goal attempts this year, including an incredible 54-yarder, but is an ominous 1-for-4 in the 30-to-39 yard range. On the other sideline, Devon Bell is only connecting on 60 percent of his kicks thus far. Do you remember that scene at the end of Big where Tom Hanks shrinks back down to little kid size, but he's still wearing the grown-up coat and tie? Get that visual in your head and then click on Devon Bell's official profile. Something tells me neither team should be confident in this situation, which is why I'm hoping JFF puts this one out of reach early.

Aggie fans have been clamoring for them ever since they were unveiled this summer, but it looks like we'll have to keep waiting a little longer (for the Alabama game perhaps?). In the meantime, as Thacktor mentioned above, our opponents are busting these bad boys out on Saturday to commemorate the Snow Bowl. By far the coolest feature is the giant bulldog on the side of the helmet, which is a good alternative since the interlocking MSU they wore in 2000 is no longer legally available. And I guess it's a neat show of unity that they all put their team slogan on the back of their jersey in lieu of their last names. The biggest loser here is legendary but easily confused Texas A&M play-by-play man Dave "He is a touchdown!" South, who at some point will probably inform us that "Hail State drops back to pass and fires toward the end zone looking for Hail State, and the ball drops incomplete for a touchdown."

An Overabundance of "More Cowbell" Jokes

According to legend (and by "legend" I mean the official Mississippi State Athletics website), cowbells became a fixture at Miss State football games during the late 1930s and early 1940s, an era the site also refers to as "the 'golden age' of Mississippi State football success." Ouch. Speaking of things that are well past their golden age, unless you've been living under a rock for the past twelve years, you probably recall Saturday Night Live producing a skit that also happened to prominently feature a cowbell. Put these two facts together, and you've got a recipe for comedic gold…or at least you did when the skit originally aired back in 2000. One reference, like we made in the sidebar above, is perfect. Anything beyond that is overkill, but that probably won't stop "that guy" from showing up to your tailgate wearing something like this and letting you know he's got a fever every five minutes (assuming his "Vote for Pedro" shirt is dirty, of course). 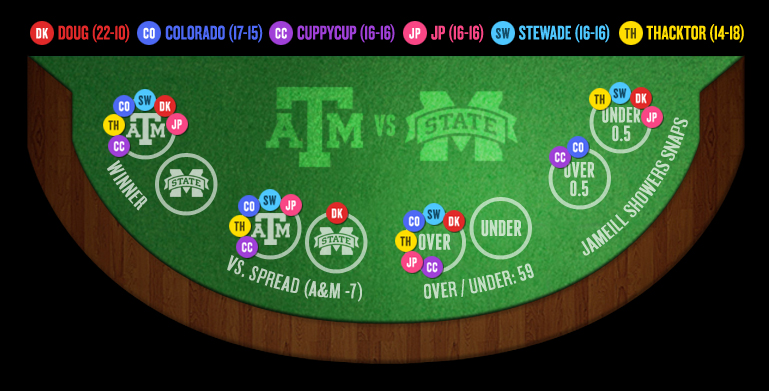 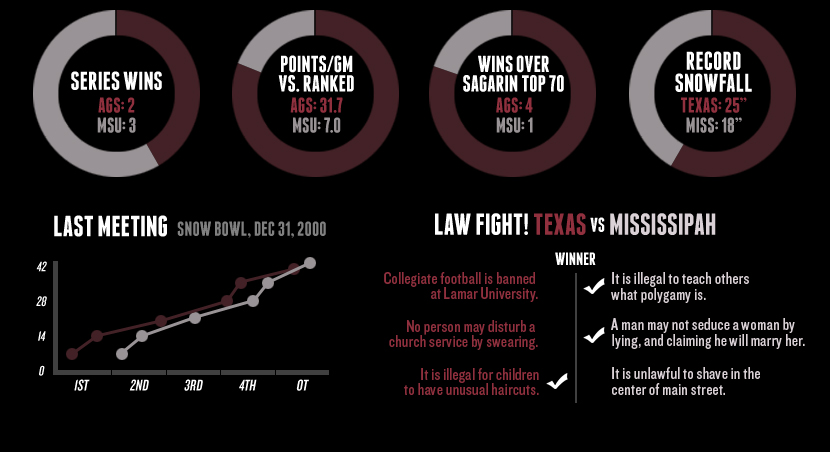 Aggies go to 7-2, make strong case for 3rd place in the West barring any late-season meltdowns. This would be the 4th SEC win for the Aggies in their first year, leaving only 14 more wins necessary to tie Baylor for their number of total wins in the Big 12. Too bad we had to leave the state to do that, huh?

Visiting Aggie fans are jailed for various offenses. Don't promise to marry that MSU Cheerleader from Playboy just to get her in the sack, Ags. Bad Bull. TexAgs' server catches fire. All fans are to report to College Station on Sunday morning for up downs.

Jackie Sherrill sheds his exoskeleton and commences with the Apocalypse.

Mississippi State hashtags #SNOWBOWL12 on field for game to be played in 80-degree weather: http://sbn.to/TlHSJZ

Looking forward to #SnowBowl12. Pulling for my Dawgs even if I am an Aggie #HailState #WeBelieve

Just met the best defensive player in the #NFL: JJ Watt. Finds out I cover #TAMU, says "that Johnny Football's just a freshman?"

My wife asked if she can watch Johnny Football alone for a little while.