THE TAILGATE: A graphical preview of Texas A&M at Ole Miss

Quick! Name 10 things you know about Ole Miss football. The Grove. Archie Manning. 18 mph. Houston Nutt. Doormats. Jevan Snead. Okay I'm out. And that's precisely why we're here: to fully inform you with our non-knowledge of everything Old MississippAH. It's time to get indoctrinated into road-style SEC football, y'all. And it all starts at Tailgate Heaven: Oxford, MS.

Share All sharing options for: THE TAILGATE: A graphical preview of Texas A&M at Ole Miss 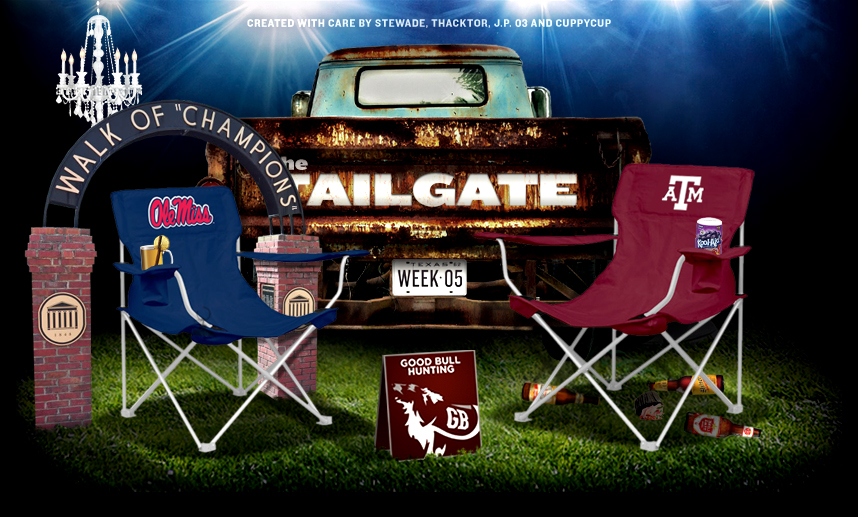 Ole Miss. The University of Mississippi. Home of Archie and Eli, but not Peyton Manning. Does that piss y'all off? That Peyton went to Tennessee? Had to have pissed y'all off. If it didn't, well laugh at my stupidity for bringing it up.

Let's get informed. WIKIPEDIA! What's "Hotty Toddy?" Do they likes to party? Cause trouble? Bother anybody? Let's go to the translation.

Are you ready? Hell yes! Damn right!
Here the person or group asks themselves to confirm the fact that they are indeed ready to either participate in or observe a football contest. The vigor with which the response is given indicates that the person or group has been anticipating this moment for some time and is beyond prepared to trample whoever is in their path.

Hotty Toddy, Gosh almighty. Who the hell are we? Hey!
The participants, likely drunk from a concoction mixed in a large bathtub by a man with a 5' beard wearing only overalls with one strap snapped, are spouting gibberish. In a moment of mass confusion, they simultaneously wonder aloud what has happened and who they are. Suddenly, as if prompted by God, all participants remember something.

Flim Flam, Bim Bam. OLE MISS BY DAMN!
Roughly translated from Redneck to English, "flim flam, bim bam" means "I can't possibly believe we have forgotten who we are. We should stop drinking this fermented pig urine every day because it's rotting our brains." The crowd then celebrates their knowledge of who they are by yelling it, by damn.

Let the school that doesn't have gibberish in their fight song cast the first stone. Hullabaloo, caneck caneck. Chigarooarem. No, we won't fit in this conference.

Bo or Barry, guys? Which one are we getting? I think you should stick with Bo. Look at the hair. The chin, slightly up as if to say "sup, bro?" in an intimidating manner. He's got a football. He means business.

Johnny Kitty-Savior Football (JKSF, it's gonna catch on. Shut up, it will.) has another monster day in his first SEC away game. The Ags show up with Damontre' Moore pulling the bus from the airport to the hotel from a rope in his teeth while doing curls with two Geo Prisms in each hand. Bo gets the start for Ole Miss, but quickly exits because Damontre' has messed up his hair for the last time today. Kevin Sumlin adopts JKSF's (I'm making this happen) feline. Sumlin loves the kitty.

I've noticed that the Effort Meter that I keep in my pocket during games has been vibrating a lot more this season. And when Damontre and Nealy were on the field together during Knile Davis's fumble in the 3rd quarter last week, it sent me on a one-way trip to Pleasuretown. I still have the burn marks to prove it.

Malena just needs to be mentioned. For too long, he's been in the shadow of Cyrus Gray, Christine Michael, and now Trey and Brandon Williams. But he's been (by far) the best RB on our roster. He runs hard, pass protects, and doesn't get any headlines. I'm not even trying to be funny here. He deserves credit because he's earned it.

I'm pretty sure I saw him wearing black last week when everyone else was wearing maroon. Did you see this? Cause I saw this. And I wanted to mention it. Because it's wrong. It's so wrong. It's like I NEED TO MENTION THIS ON A MESSAGE BOARD wrong.

I don't want to alarm you. I really don't. But I happened to walk through the Aggie locker room the other day, and Damontre had this pinned up in his locker. Honestly, I don't know what that means, but I'll just leave it here for you to think about.

DeVante Harris doesn't care that you dressed like Craig Sager at the SEC Media Days. I personally love you for it, but he doesn't care. And I don't matter.

I don't know much about Hugh. His name sounds like a romantic comedy superhero, and he’s handsome. Scratch that. Quite handsome. But I do know one thing: He was the former head man at Arkansas State. Did you hear me, Aggies? Arkansas State. Ok, no, he had nothing to do with the thrashing of Mike Sherman, but I still shudder whenever that school is mentioned.

Ole Miss has given up 16 of them in their first five games. Texas A&M has recorded 16 of them in only four. With plenty of passing opportunities forecasted for Ole Miss, something tells me Damontre Moore will be spending plenty of quality time with Bo Wallace on Saturday. And by "quality time," I mean "chasing him down like he stole Damontre's lunch money and exacting crushing, painful revenge." Have you seen what Damontre Moore buys with his lunch money, Bo? Nails. Razor blades. Broken glass. Battery acid. You made a huge mistake, buddy. Get ready to pay the price.

Back in the summer, when JFF was still shirtless-fighting on Northgate and had yet to be named the starter, Aggie fans everywhere naturally assumed we'd be looking at a quarterback controversy for a good chunk of the season. After all, in seasons past, the only man on campus more popular than our bowtie-wearing, Gangnam-style dancing school president is whoever happened to be playing backup quarterback that week. So please excuse us if we're all a little stunned that the only potential quarterback controversy is actually taking place on the other sideline this time. Is this the week that Ole Miss fans start clamoring for Barry Brunetti if things go south for the Rebels early? For what it's worth, this corner is pulling for Bo Wallace and his incredible hair. Seriously, it's a flowing mane of greatness. Not convinced? Click on this interview and tell me if you're watching him or a 1987 clip of Dolph Lundgren.

A word of warning to the ladies of Ole Miss: you're about to be invaded by hordes of Texans making their first trip to the Grove. And what are they expecting to find once they get there? If any number of message boards are to be believed, a scene straight out of Homer's Odyssey with beautiful Ole Miss coeds playing the role of the Sirens. The good news is that Aggies are by and large one of the most polite fan bases in all of college football, so don't expect anything worse than a little harmless photobombing or maybe even some questionable dance moves. If you come across an outlier, though, be ready to call in Chris Hansen to encourage any creepy old guys to take a seat over there (preferably under a nice crystal chandelier). And if he's not available, just notify anybody in a maroon polo. We're outstanding at policing our own should the need arise.

In case you didn't hear, our friends down in Austin travelled to Oxford a couple weeks ago and came away with a pretty convincing victory. What does this have to do with Texas A&M? I have no idea, but insufferable Longhorn fans everywhere can't stop bringing it up. Which is weird, because we're not in their conference anymore. This situation is starting to take on a creepy Wayne's World vibe, and I don't like it. After all, nothing says "I don't care about you anymore" like defacing our billboard or circulating this picture on Facebook to announce that you beat an SEC team this year before we did. No mention of the fact that your first "SEC" win came against a team that hasn't beaten an SEC team in its last 15 tries, either, but hey…congrats? So no matter what happens on Saturday, expect your burnt orange-wearing coworkers to attempt to validate themselves by comparing our effort to theirs. My advice? Channel your inner Wayne Campbell. And then hope that Geno Smith and West Virginia humiliate them like so. 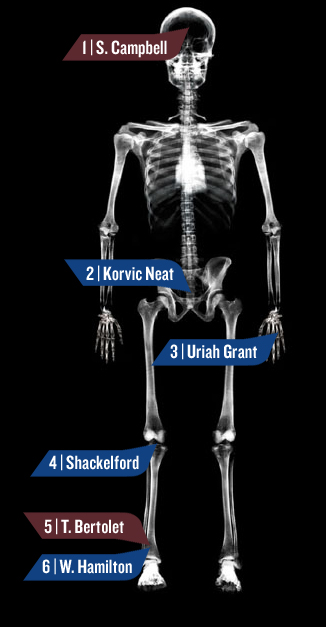 Concussion, doubtful. - Stay out of the game. We don't need Steven thinking he's a superhero mid-season. Fix that brain, son.

The most southern name on the planet. The only thing that would make it better would be "Uriah Grant, Esq." He'll play with a club.

Knee, out for season. - D.T. Shackelford is a cop out for vengeance. No, wait, he's just injured.

PLACE YOUR BETS: LUCK IS NO LADY 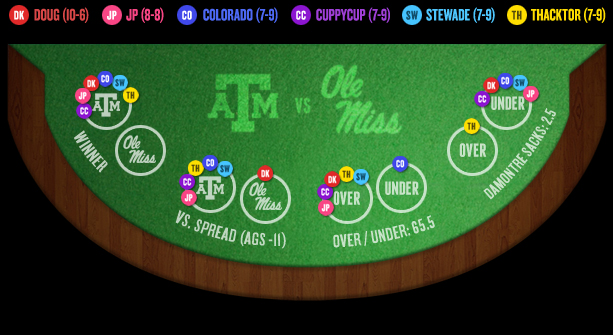 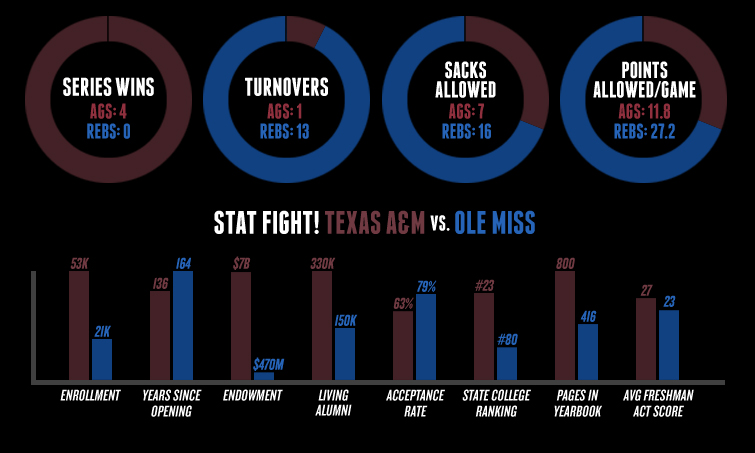 The average arrest total on the Square gets just destroyed. Aggies begin to feel at home in their new conference, a little too much so and they plant a Texas flag in the middle of Ole Miss's campus proclaiming "This is SEC Country!" Residents respond, "Yeah, we know." Manziel has an autograph session at the SPCA, offering to sign your newly adopted pet.

TexAgs melts down. It melts the hell down. Like Fukishima, but with less...you know, death. Prediction: 157 banned users, 156 of them t-sips trolling the boards because they don't care that A&M left the Big 12. Sumlin makes the entire Aggie fan base do gassers, we comply.

There is no tie other than the one our president dons so well. He's a gentleman, scholar, war hero, poet and humanitarian. Respect. The. Bow tie.

May attempt to diagram a Johnny Manziel play from this past Saturday. There will be squiggles. Many, many squiggles.

Commit to Texas as an athlete? RT @stringsays: What does Johnny Manziel have to do to get half the hype David ash is currently getting?

Gonna talk about this on the show tonight, but the 30-30 #Broke really connected. When OB took off, my spending took off.