All eyes were on College Station Saturday and the play of A&M quarterback Johnny Manziel. How would he stack up against one of the best defenses in the country? He struggled and had one of his worst games of the season, all due a well designed LSU blitz.

Saturday was a frustrating day for many. Once again Texas A&M was on a national stage, ready to gain a monumental win for the program. The game started fast for the Aggies, but slowly slipped away. This weekend it wasn't because of the defensive play and missed tackles; it was LSU's well designed blitz scheme and lack of offensive consistency.

We can point to the obvious things that gave the game away. Yes, 5 turnovers won't win you many games unless you are playing Ole Miss. That is obvious and comes down to execution. We can't discuss that much here. Many left Kyle Field on Saturday satisfied with the offensive production; but it could have been more against a relaxed LSU defense. That we can discuss.

If you read my instant reaction article after the game, you will find I was very critical of the playcalling after the second drive of the game, up 9-0. It seemed as if we "took our foot off the gas" against an LSU defense that was on its heels, reeling, and falling like flies. Others contributed it to a young offense, going against one of the better defenses in all of college football. Like any disagreement, the truth probably falls somewhere in the middle. 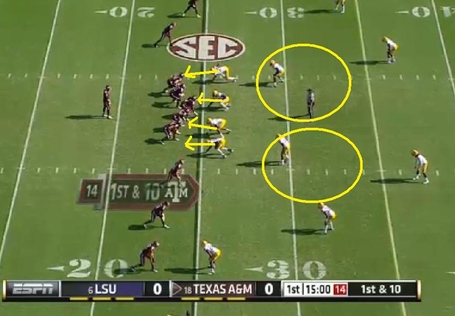 This is the very first play of the game and the look the LSU defense came out in against our offense. This would be the look that LSU showed for most of the first quarter. It's a simple nickel package with four down lineman, two linebackers, and two safeties. At times, one of those linebackers would walk and cover a slot receiver, making it look like more of a dime package look with one lone linebacker in the middle of the field.

The A&M offense came out and was well prepared to face this defense, doing two things early: throwing horizontally to the perimeter challenging the LSU defense in space and also power runs right up the middle. That led to two quick scores.

Also, I must point out that the plays on these first two drives were scripted. That means these plays were designed for the LSU defense in particular and were focused on during practice leading to the game. Why is that important? It's because the offense, and more importantly Johnny Manziel, were most comfortable with these plays and it showed. The players and coaching staff get an A+ for preparation coming into the game.

But not all the plays during the course of the game can be scripted. Especially when you are running 95 of them. That means your young players will be put into some uncomfortable situations, especially if the gameplan changes due to adjustments you have to make. And that unfamiliarity and uncomfortableness cost the Aggies on Saturday. Just look at these yards per play numbers:

What led to this dramatic shift in yards per play? John Chavis and his perfect blitzing scheme.

In the first picture I showed you, LSU came into the game content on rushing four down lineman. But like most of the pass rush we have faced recently, they weren't really "rushing" the passer. The lineman were holding at the line of scrimmage and ready to close any running lanes Johnny thought he could rush into. But that strategy wasn't working because of the attacks on the perimeter and power running game up the middle. So LSU had to adjust, putting more speed on the field so they could run sideline to sideline. 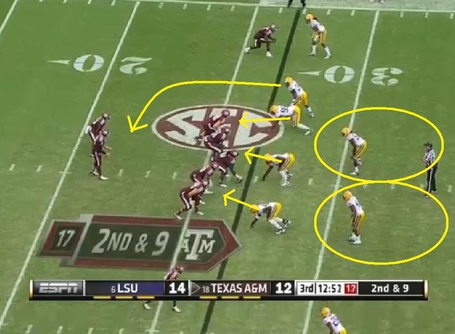 LSU went from the traditional nickel package into a 3-3-5 look with three down lineman, three linebackers, and the same five defensive backs. The interesting thing LSU did was they still rushed four players on every play -- but they constantly rushed either a linebacker or defensive back from the outside. This move by John Chavis was brilliant. Why was it so different from the previous pass rush? Due to the outside edge rusher, Manziel became uncomfortable in the pocket quickly, and his bad tendencies to scramble before going to his reads manifested. Manziel simply just didn't trust his offensive line to pick up this blitzer and would bail on the play prematurely, leaving open options down the field that could have been converted. Just look at this example. 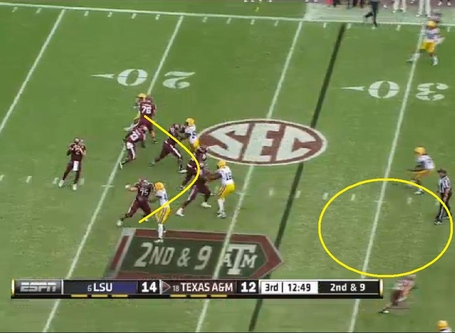 After the snap, look at the pocket Manziel has to throw the football. Luke Joeckel picked up that edge rusher as good as you can. Manziel now has room to step up into the pocket and attack the middle of the field which will be open. Unfortunately, Johnny doesn't do this and bails to his right, something he is used to doing. It's instinctive to him. 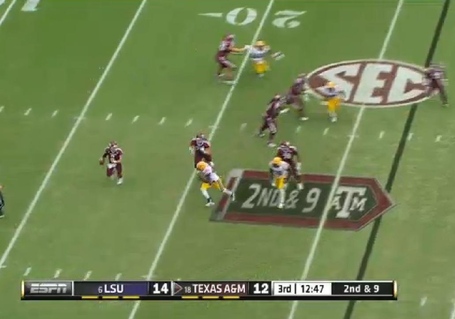 And the LSU defense would be ready for him to bail. Those defensive lineman were ready to run down the line and stop Johnny for a minimal gain on a scramble or errant throw. This particular play ended in a incomplete pass. 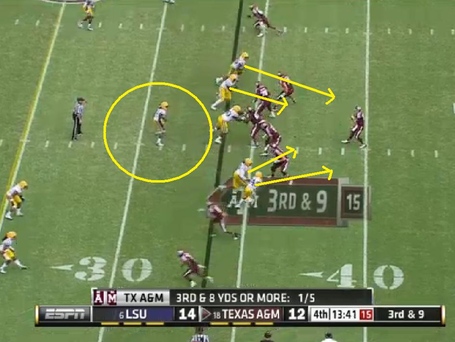 But the scrambles and errant throws were not the only thing that messed with Johnny's game. Bad, bad technique played a role as well. On this third down play LSU actually rushes 5, with two outside rushers. To counteract this blitz, a wide receiver screen to the right has been called. It should be a pretty good play call to take advantage of the extra blitzer. 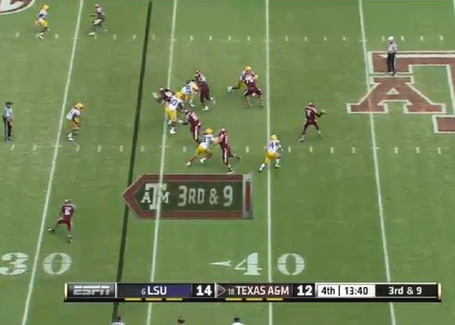 Johnny doesn't bail here like on the previous play, but he gets anxious with his throw. Look at his feet as he is ready to throw this ball. He will throw this ball off his back foot. This was a common theme, as Johnny failed to square up, set his feet, and create the proper torque necessary to put strength into his throws. 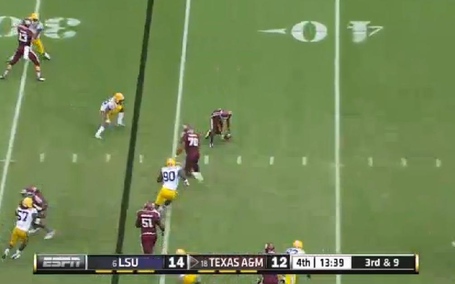 The result? A pass in the ground. We saw too many of these on Saturday.

There was no doubt there were several reasons why our offense once again slowed against a quality defense. I believe the first is just Johnny being a tad uncomfortable with the plays that aren't scripted. During practice, he knows where his reads are and can get the ball out quickly making the offense flow. When he doesn't have the anticipation, he holds onto the ball for too long, is reluctant to throw, and results to scrambling. And John Chavis' blitzes from the outside? Only exacerbated the problem as Manziel has the instincts to bail on the play by scrambling the other way instead of stepping up in the pocket with confidence. It also caused bad mechanics, particularly throwing off his back foot and not getting the strength he needed behind his throws.

So where does playcalling come in? It's apparent Manziel just couldn't execute the offense that was called. Yes, you are right and that is exactly the problem. Manziel has been phenomenal to date, but has struggled as of late throwing 6 interceptions the last 3 games. His two worst performances came against two Top 10 defenses in the country. No surprise there. The fact is Manziel is a horse that has yet to be broken by Kliff Kingsbury and this coaching staff. He has made "unnatural" plays to date, but in reality not plays the coaching staff expects out of this offense. He doesn't check down for the 7 yard gain, keeping the flow of the drive going. He doesn't make the quick reads this offense thrives on. Most of the time he is looking for the home run pass deep or the 50 yard scramble. That works against Arkansas and Louisiana Tech but not against a defense like LSU and Florida. There is no doubt Manziel has the ability to learn this offense and execute it; but it will take time, probably not until he is a junior and senior.

Until then, you have to take some of the pressure off Johnny to constantly make plays for this offense. He is just a redshirt freshman. LSU was just baiting him to beat them with his arm. For a majority of the game, LSU gave Texas A&M favorable fronts to run the football. And when the Aggies did run the football? Were gashing the Tigers for 7, 11, 16 yards a pop. Now, I'm not saying we had to line up in an I formation. I'm not saying we should even be a balanced offense. That just isn't going to happen. But what I do want to see is the offensive coaching staff taking more of the pressure off of Manziel by getting your talented stable of running backs and receivers more involved. Get more creative with the fly sweeps, the play actions in the backfield to slow defenses down, and even hitting a quick draw or two to keep the LSU defense honest. The fronts were there to take advantage of. Instead, A&M elected to continually line up in a 5 wide set, inviting the pressure off the edge, and leaving Manziel unprotected to go back to his instincts disrupting the flow of the offense and consistency in it's attack. For a majority of the game, LSU was dictating how the A&M offense played instead of the other way around. Instead of forcing your system upon a group of players you inherited and didn't recruit, try to start using their strengths which they already have to take pressure off a young player.

It doesn't get any easier in a three game road stretch. Even though Auburn sits at 1-6, they are still a talented defense with speed just like LSU. And now the blueprint is out there for other teams to stop Manziel and the A&M offense. Gene Chizik along with former NFL coordinator now Auburn defensive coordinator Brian VanGorder ain't no fools. It will be another struggle unless both coaches and players adapt to each other.