Since Oxford was home to Faulkner, we give you a wordy game preview of Ole Miss in addition to the graphic brilliance of The Tailgate this week.

Share All sharing options for: Ackbarlom, Ackbarlom!: a Literary Preview

He suffered. Inside this great stuffy contraption with the early autumn sun beating down and the locusts in the oak trees and the sweat running down his undershirt. The people looked askance at him: he was not one of them, not even with the official documentation, the letter from the president, the announcement in the papers…he was outside of them and they reminded him. Not outright; they were too well-bred for that. But they reminded him. Hushing and hiding their children as he pantomimes cheers for them. Embarrassed forced politeness was the best he could expect.

Through the Grove with the oaks dropping motes of tiny pollen, spinning in the humid air like gossamer baton artists in the band on the golden grass of the autumn…he blinks once to clear the sweat from his eyeballs but the salty tang burns anyway and he immediately raises his hand to wipe the sting away but it is just a giant furry paw and a giant furry head and he sniffs to cover up the pain and sighs deeply. He crushes an empty plastic cup beneath his giant padded foot.

An Admiral, he thought, leader of a fleet and respected by everyone. I could have looked for traps I could have had a title and gotten respect and a pat on the back by this young man with floppy hair and red-and-blue striped tie and white collared shirt and freshly starched chinos. Instead he smiles smugly and raises his cup in a mock Cheers and the viscous cola and bourbon splashes out, splattering the already sticky grass to add to the frantic and tepid bouquet of morass underfoot while he trundles onward, on to the friendly sterility of the stadium’s restricted areas, the steel and concrete underbelly that houses the scurrying of busy people with laminate tags around their necks and brightly colored shirts and on and on into one more night of solitude amongst the tens of thousands, of standing alone under the lights with that stupid grin on his face and the litany of suppressed remembrances in his heart.

He poured another glug into his plastic cup and looked up. Preston saw it then. Its comedic head was bouncing above the crowd sixty yards away with a leering demented grin on it that was made more unnatural by its unfamiliarity. The old man with the wispy gray beard was gone forever, replaced by a cartoonish abnormality. A laughingstock. Preston got angry again and turned back to the crowd.

"Hey," he said again. She smiled but did not speak. He’d seen her approach five minutes before, a friend on each arm. She was glowing in a red sundress and her light brown hair was freshly ironed. He thought of the flowers on grandma’s porch. Lilacs, maybe. He couldn’t remember shit like that sometimes.

He tried again. "Which ‘gate are you at?" She looked as if she were about to speak and then he was there behind her, a good three inches taller than him and maybe a couple years older, slovenly in blue jeans and a polo shirt and not even an official coaches’ polo but just a regular polo you might even buy off campus or even not in Oxford. The girl turned and kissed him on the cheek and Preston turned in disgust, ashamed of the three beers he had foolishly wasted on the girls. "Fuckim," he said.

He went back to the table and refilled his cup and as he turned it was there, right there in front of him in the path with the childish eyes and the defiant mocking grin. Preston’s rage overcame him and he went to hurl his drink into the bear’s face but then he saw something, maybe a glint of human eyes in the depth of the mouth’s mesh netting and he checked his arm just as it was about to reach the pinnacle of the upswing and only a small dollop of the potent liquid lurched out of the cup, a lobe of glittering bubbly black undulating through the autumn morning sun before splashing on the flattened brown grass. Preston couldn’t speak. The bear walked on.

"Fuckim, too," he finally said.

"Yeahcoach," he said, opening his eyes.

"Nocoach," he said. On the giant smooth monitor in front of him he watched the swarming bodies in maroon surge through blockers and knock down the opposing quarterback over and over again like ill-tempered beasts with an insatiable need for humiliating big men.

All that time and obscurity and the thousands of reps and the bare cinderblock walls of his temples and now it was here. He told himself it was a validation and that he wanted it; had always done so. He told himself it’s why he’d endured it. He watched for a few minutes and then drifted back inside his mind to all those hours sweating through the obscurity in places named Jonesboro and Scooba, and all for this, all to be torn limb-from-limb in front of a national TV audience by a bunch of kids from Texas of all gotdamn places in front of sixty thousand Southern gentlefolk and no he didn’t think it was supposed to happen that way but here it was.

He opened his eyes again and he was in the locker room. There were tinny noises coming from the earbuds of his teammates as they pulled on socks and undershirts with an intense burning focus as though they were tasked with the perfect assemblage of garments and any shortcoming would result in their immediate demise. He blinked. A thin sheen of sweat covered his forehead as he pushed back his hair and checked his helmet and then the clock on the wall and saw that it was almost time.

And then they were running, down through the tunnels and the muted cacophony from above was somehow amplified by the exposed metal pipes and the unnatural florescent fixtures and the dank smells of subterranean concrete. Then light all of a sudden, and a flash of bright colors enveloped by a carpet of spreading green and he felt the old familiar surge again, the hopefulness and the invincibility and the buzz started in his stomach and rode up his spine into his brain and he smiled in spite of himself as he was running, running with a hundred other men out to hit other men bodily for a full hour of kept time and then out of the corner of his mask he saw it again and almost fell. Standing there, pumping its grotesque arm, the bear. The black bear with its terrific eyes crossed in exaggerated anger and the worst part: the striped jersey that was just like his he gave a sharp intake of nervous breath as the lights reflected off the beast’s eyes for just a split second and the leer seemed to grow even more horrific and then he was past him staring across the field at the white-clad foes pouring out of their own locker room and jumping and strutting through the grass that was until just recently not his home, had never been home and why had he wanted it to be? He couldn’t remember that and he blinked again and forgot all the rest, the film sessions and the studying and the reads and he looked around and he was scared. He saw clearly that his life had led slowly and inexorably towards this public execution: there was a man wearing a 94 and one wearing a 10 and he was suddenly so scared. 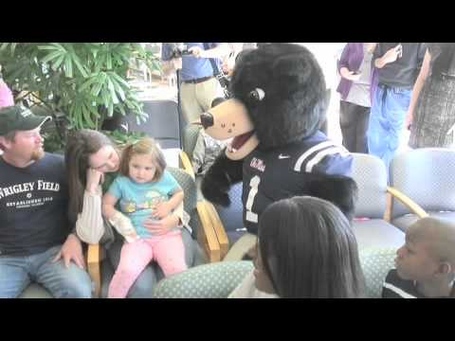