Manziel and Offense Fire On All Cylinders in Second Quarter

Last week, I talked about how Johnny Manziel needs to continue to develop in the Kliff Kingsbury passing game by actively looking for his receivers over the middle and down the field. He continued to struggle in the first quarter against Arkansas, but things changed in the second quarter leading to Johnny setting Texas A&M passing records and total offensive numbers on the day. I breakdown how he succeeded.

Share All sharing options for: Manziel and Offense Fire On All Cylinders in Second Quarter

So if you've recovered from your Arkansas hang over by now, you'll remember we talked last week about two separate problems the Texas A&M offense was encountering: 1) problems in the run game and 2) problems with Johnny actively looking for his open receivers in the middle and down the field. Well, I'm about to show you a play from the second quarter of the game when the offense began to click and it was because of Johnny throwing down the field to wide open receivers. Here we go. 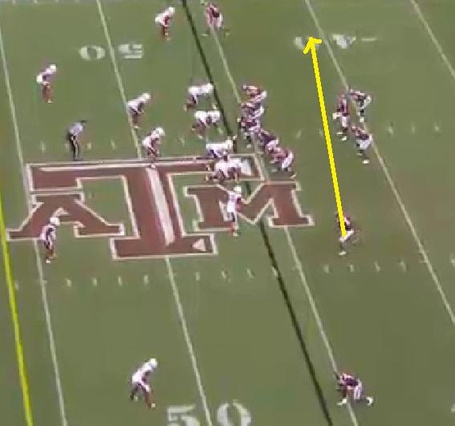 This pass play will end with Mike Evans catching a 15 yard strike between the hashes.

But there will be some interesting play action in the backfield. This play will feature almost the same set up and motion we saw last week when we broke down our running play -- Thomas Johnson will motion across the formation acting like he will get a shovel pass at the snap of the ball. He will then be a pitch man for Johnny on a triple option fake. The exact same set up we saw the first play of the game against South Carolina State. 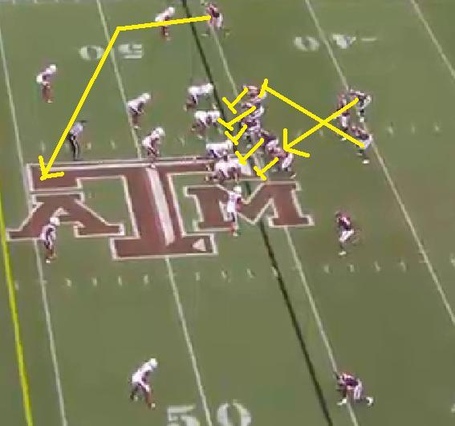 Also in the backfield, Ben Malena will run the fake zone read, running to the left behind his offensive line who is also blocking to the left selling the fake zone read. The defensive end on the backside, as we have seen before, will be left free on this play and crash down hard much like the South Carolina State defender did. I like to think that Kliff Kingsbury has "pre-conditioned" the defense he faces to do this because he has shown this same look every week. The defensive line won't rush up the field because they think its a run play. Meanwhile the linebackers will bite on the run action in the backfield. But SURPRISE! It's a pass play. That leaves Johnny a clean pocket to throw from and a wide open space in the middle of the field for Mike Evans to run to. See how awesome this offense can be! This play was in the making for weeks before. Great game planning by the coaches and this isn't the last we have seen this particular play set up.

The one difference between last week and this week if you haven't noticed is tight end Nehemiah Hicks in the backfield. He will cross with Malena on the play to provide pass protection to Johnny's right just in case that defensive end plays stupid and decides to rush up field. Hicks would also have the option to release into the flats to that side if there wasn't anyone to block giving Johnny yet another option in the passing game. (P.S. -- when we run this play as a real triple option in the future, Hicks will then be a lead blocker. See how this is working?) 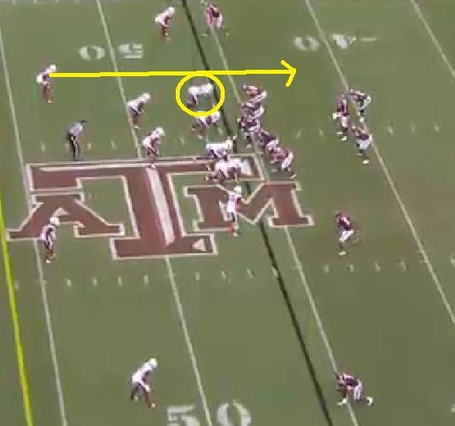 The Arkansas defense isn't going to do anything fancy on this play. It looks like they are playing straight zone. The left defensive end will crash inside, highlighted by the yellow circle. The interesting thing on this play is the safety to the left will be blitzing on this play. Either that, or he bit so hard on the play fake in the backfield that he will end up at the line of scrimmage. Either way, that will leave a huge hole in the coverage for Mike Evans to run to and catch the ball with room to run. 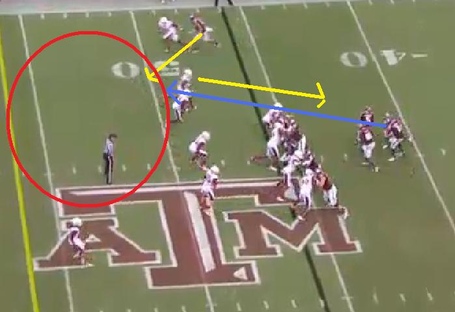 I like this frame because we can see all that is going on in the backfield on this play. Thomas Johnson has run across the formation. Nehemiah Hicks isn't far behind him blocking to that side. Ben Malena is faking the handoff. Notice how far that safety we just talked about is already up the field. Just about even with the linebackers at the 5 yard line and still coming. Now notice Manziel's eyes (blue line). Even with all that junk that is occuring around him, he is keeping his eyes on Mike Evans and the position of the linebackers. That is WINNING. Also notice the huge hole in the coverage already highlighted by the gigantic red circle. This is not uncommon with the Razorback secondary. 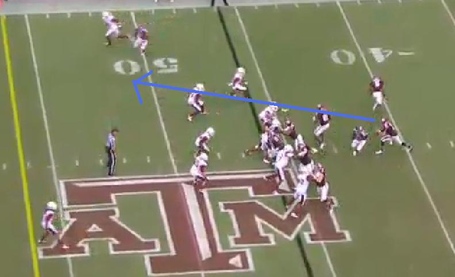 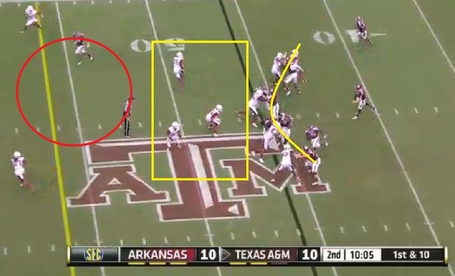 By this time, Johnny has already released the football and is following through with this throw. I gotta give some love to the offensive line here. They provided Johnny with a clean pocket on this play as they did all day on Saturday. Even Nehemiah Hicks is contributing by blocking that free defensive end and that blitzing safety. The Arkansas defense has no chance on this play. Thanks to the play action, the linebackers are just now retreating into coverage but the ball is already in the air. And Mike Evans is running free right behind them. 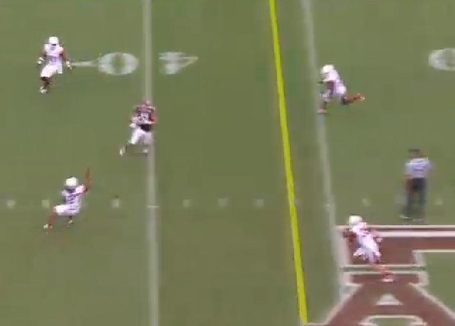 Mike Evans catches the ball 15 yards down the field 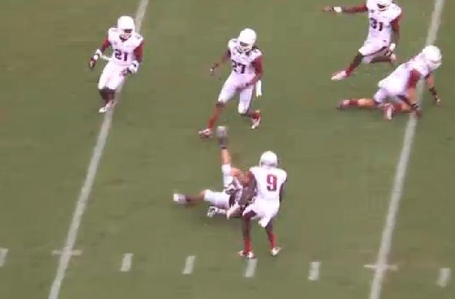 And some YAC later, it ends up being a 26 yard gain on a drive that ended with a FG allowing Texas A&M to take the lead for good on the day.

So there you have it. This was the first play of the game where Johnny really attacked down the field with his arm and it was set up some weeks before by some scheming thanks to Kliff Kingsbury. From here on, Manziel would build the confidence to continue to attack down the field, highlighted by that 80 yard Ryan Swope pass play later in the quarter.

These are the type of plays we can continue to expect out of our offense and you can see the results when Manziel is on top of his game. This is what many, including myself, have been waiting to see. This offense will be tough to stop for anyone in the SEC, including Alabama, if we are making plays like this. With Ole Miss and Louisiana Tech next on the schedule, hopefully Manziel continues to take advantage of poor defensive play and builds his confidence in the passing game as the season progresses.