See how the Louisiana State Tigers stack up against Texas A&M’s Fightin’ Texas Aggies in this week's Foundation of Facts...

Share All sharing options for: Foundation of Facts: LSU vs. Texas A&M

Wow, the Ags sure looked good in the first half versus LaTech and were just able to fend off a furious comeback by the offici Bulldogs and pull it off, to my relief. This week we will look at how the LSU Tigers stack up against the Aggies. LSU has played some legitimate defenses this year but have not squared off against as potent an offense as the Aggies' 6th ranked offense.

2. LSU plays BAD in the redzone on offense AND defense; at least as far as efficiencies go. 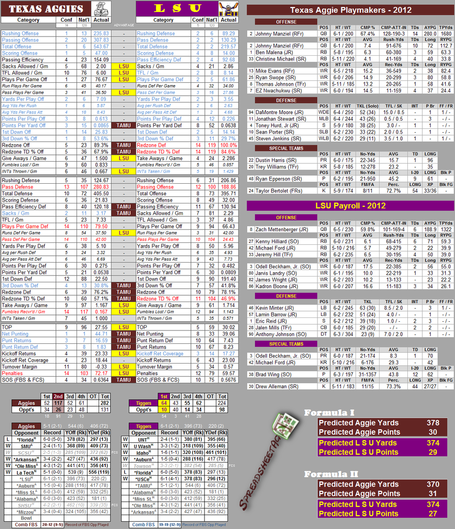 1. I expect A&M to get some sacks, to stop LSU on 3rd down pretty regularly, and to be able to slow their run game. However, LSU could surprise some people by going to the air against this porous Aggie defense.

2. A&M may be 13th in the SEC in total pass defense yards, but we are 6th in average yards per pass allowed; i.e. teams have gotten behind on us and had to pass A LOT, which raises the total pass defense but that doesn't mean we are bad, just victims of the other teams strategy.

3. When was the last time a defensive end led a team in tackles through 6 games? DeMontre Moore is a beast!

4. I know LSU has played South Carolina and Florida, but that doesn't make up for playing powder puffs like Towson, Idaho, and UNT; these teams do not offset, which is reflected in their SOS and their opponent's records.

I hope you enjoy this feature and will come back next week to see how the Aggies will fare, statistically, against the Auburn War Eagligers in Game 8.

LOOK AHEAD: Auburn is 1-5 and 0-4 in the SEC. They have the 116th ranked offense and the 78th ranked defense; in other words, they are about as bad as Idaho; and much worse than Arkansas.