THE TAILGATE: A graphical preview of LSU at Texas A&M

The last time we were in the company of the purple and gold, we were serenaded with an S! E! C! taunt-chant as we filed out of Jerryworld. Now, filled to the brim with corndogs and kool-aid, our two fanbases will meet again in much friendlier territory to taunt-chant each other into submission. It's time to take a trip down the rabbit hole, and as the Mad Hatter likes to say, "Oh yes mustard! That'll do... Mustard? Don't let's be silly. Now lemon, that's different..." LET'S DO THIS.

Share All sharing options for: THE TAILGATE: A graphical preview of LSU at Texas A&M 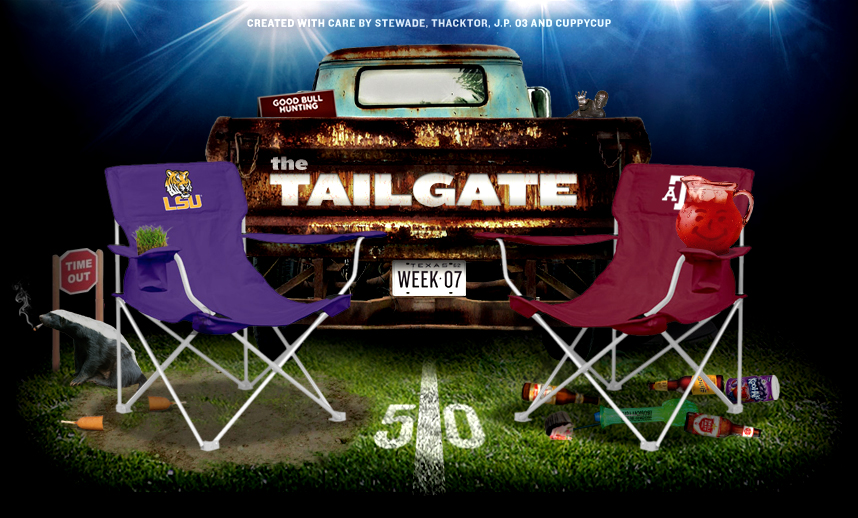 Two ranked foes. Two losses between them. A rivalry long dormant awakens to find these two teams in the same conference: one the longstanding member, the other a fresh face off to a hot start. An SEC West battle for the ages. It'll kick off at...11 FREAKING AM? I may be the guy writing a column called "Uninformed Smack" but I'm informed enough to know that this game being on at 11 is total bullshit. The ONLY thing that makes me a little happy about the kickoff time is the fact that this is the first time the LSU team has had to get up before noon on the road since 2007. Wake up, Cajuns. It's time to meet the Aggies. Ags, get up early if you're going to the game on Saturday. Pick your liquid volume enhancement of choice (coffee, booze, coffee with booze), ingest at a pace that would be considered responsible in New Orleans (no butt chugging) and be as loud as you've ever been on Saturday. The team woke up. It's time for the fans to wake up, too.

Crap, I got serious for a second there. Anyway...let's do this.

Uninformed Smack VI: In this article, Zach Mettenberger says that the widdle Aggies will be sweepy because they have to stay up late for the yelling after dark thing that they do. Eaux really? A 12:30 AM bedtime for a college student is akin to someone in the workforce turning in at 7:30. I don't think that the Ags will have any kind of disadvantage in the game due to being all tuckered out from practicing yells. The only thing we have to worry about there is Manziel throwing his voice out and that kind of thing only happens to mortals.

Apparently there's more than a shot at the SEC West on the line here. Frankly, I'm frightened knowing that the team won't want to deny their fan base $0.01 Whoppers. Maybe someone will order the Metten Burger with Fries. You can't finish more than half of it because it has a low completion rate. I'll go ahead and wait for you all to get that. Oh, you get it? Alright, I'll just go ahead and finish this Bleachtini then.

Do not name a Tiger in your will. Ever. Or do, it seems they planned this one a tad poorly. "OK, here's the plan. We'll knock on the door with the gun out. After my mother recognizes me, sees the gun and knows my intent: we'll just shoot into the door that was just slammed in our faces. IT IS THE PERFECT CRIME!"

Prediction: I named a score on the "Geaux Show" (Guys, why not "Geaux Sheaux?" You really missed on that one, seriously.) and I"m going to take it back now as I've done some thinking and the Kool Aid I've been consuming is starting to take over my body. I'm not changing the victor, rather the score. What I'm saying is that my predictions mean nothing, just enjoy the ride.

The highly respected LSU defense is going to roll in here with an appetite for Johnny Football. Here's the problem: Johnny Football is familiar with kitties. Quite. He alone has the power to rescue or destroy the feline. Senor Football will have a stellar day, but be disappointed that he doesn't rack up more than two miles of total offense in this one. Mettenberger becomes more intimate with Damontre' Moore and Spencer Neely than he would have liked, and these same gentlemen along with Sean Porter do a good job of stuffing the run. LSU players return home to sit in their rooms, cry and tigerbait into the wee hours of the AM. Kevin Sumlin laughs because he just tamed the cat. Sumlin makes Sigfried and Roy look like amateurs.

The greatest gift given to Aggie football in the last decade is a 10-second pocket for Johnny Manziel.

With Campbell out, he's one of the most important pieces in the "get-the-ball-back-to-Johnny" puzzle.

I haven't seen C-Mike smile in a while. So this is nice. Look at him, all happy over there. I bet he's watching Johnny Manziel film.

This man has some killer expressions. There's the Tales from the Crypt, the "No bra, I totally didn't touch her inappropriately," the "Dude, I totally did," and the "You probably won't ever call me Zach Football."

This "BIG BAD WE'RE GONNA EAT YOU ALIVE, YOU FORMER BIG-12 TRASH" SEC defensive line has a combined total of 2 more sacks than Damontre Moore has by himself. And now you have a slippery, quick-twitch, vaseline-soaked quarterback named Johnny Effing Football to deal with.

Les Miles, [insert the first crazy thought that comes to your mind]

Somewhere, this man is chomping on a plateful of Winter Rye, mismanaging an alarm clock, snapping on a #8 guard to his wife's hair clipper, and seal-clapping to highlights of JFF toe-tapping his way through Louisiana. Which pretty much sums up all I know about Les Miles. And would you look at that, I managed to get through the entire Cast of Characters without featuring Johnny Manziel. I knew I could do it!

A taste of our own medicine

It's been fun to roll into our previous matchups touting A&M's obvious superiority at the running back position. Your team has a stud in the backfield? That's cute. We have three. Except the last time I counted, LSU has five. FIVE. Alfred Blue. Kenny Hilliard. Michael Ford. Spencer Ware. Jeremy Hill. Good grief. I haven't seen that much talent assembled on one team since Gemini, Turbo, Nitro, Laser, and Thunder. And as everyone who watched the greatest early-90s show of all time knows, there's only one man who can defeat them: our own personal Wesley "Two Scoops" Berry. Don't be shocked if he's still #1 in the SEC in rushing after this one.

Proof that things really are different this time?

We've seen this before: an upstart Aggie team, beaten down from years of sucktitude, makes a coaching change. A surprisingly good season filled with cautious optimism culminates with a matchup against LSU to finally prove that we've arrived. The last time we found ourselves in this situation, this happened. So will this year finally be different? The experts say no, but you should already know how I'm gonna vote.

No offense to Mizzou (we'll have plenty of time to offend them in a few weeks), but the idea of playing our upcoming matchup on Thanksgiving weekend is…well…underwhelming. And since our regular Thanksgiving opponent is apparently booked until 2018 and is busy preparing for a huge future Thanksgiving series with TCU (LOL!), we'll need to look elsewhere for a replacement. Which brings us to LSU. Sorry to ruin your holiday plans, Arkansas fans, but you don't think CBS would sell its own mother to the Taliban for the chance to follow its afternoon Turkey Day NFL game with a primetime SEC matchup featuring an interstate rivalry that dates back to 1899? Attention Les Moonves: Laissez les bon temps roulez!

Thanks for the tips, condescending Tiger fans, but this ain't our first Les Miles rodeo. On top of the aforementioned Cotton Bowl, we knew Les back in his Oklahoma State days, so we're well aware that he seems to have based his entire coaching philosophy on a bold decision made by a Tom Cruise movie character. So yeah, we admit that we have no clue what he's gonna do on Saturday. Fake punts? Sure, why not? Going for it on 4th-and-39? Child's play. For all we know, he'll bust out an iPad and look for play-calling tips on Pinterest, which, since I don't actually have a Pinterest account, I can only assume looks like this: 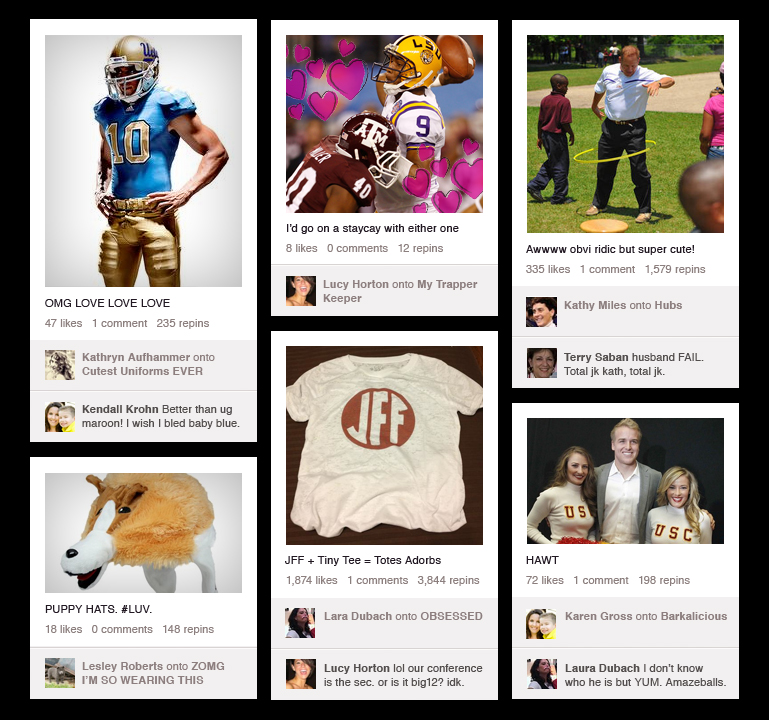 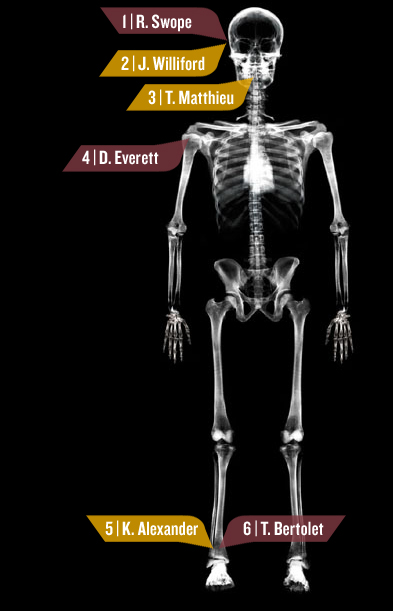 Concussion, questionable. Oh no, Ryan. I saw that hit. I don't want you to, but you likely should sit this one out, buddy.

Concussion, questionable. You go ahead and play though. Go right a head. Get it? Seriously, don't play with concussions.

Weed, off the team. Legalize it.

Shoulder, questionable. This thing is troubling young Deshazor. Hopefully he's able to suit up this week and lay the wood.

Ankle, questionable. Well, he's certainly not playing. Kwon is an epic name, dude. Drop the last name and you win the year.

Ankle, probable. Again, another ankle injury with a great name. Great cajun lasty. High five. Not too high, though. You know... the ankle. 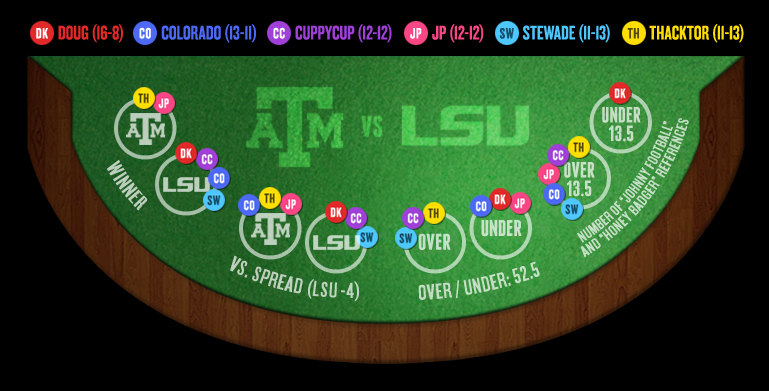 Statgasm: Milk your own cow 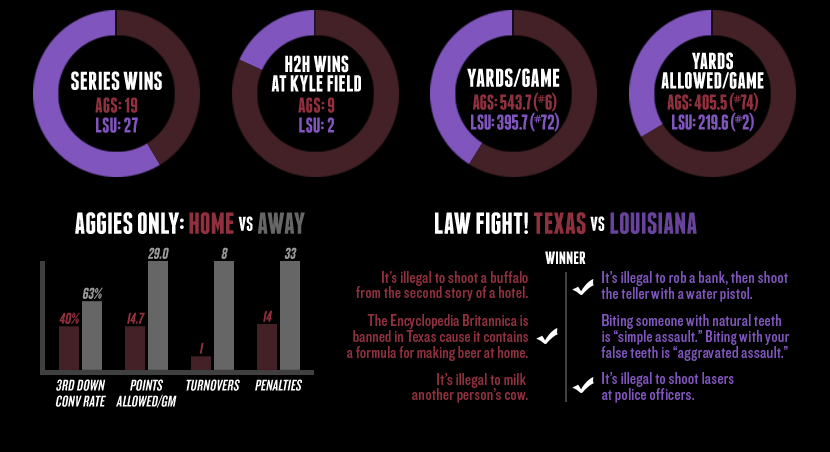 Are you a haberdasher in College Station? Better question: Do you have pants for sale? Good. If A&M wins this game, mark them the hell up. It'll be a seller's market for pants as there will be at least 86,000 people needing a new pair because some biological function was set off by the sheer amount of pent up angst and frustration being released by a win. Make your money, sell pants.

Welcome back, Battered Aggie Syndrome. We're all short selling our hopes for this game. We've been doing it all year. Towing the "We're just the new guys, we don't know what's going to happen but we think we'll be competitive. We don't really expect to win all the time in this first year." To be clear, I'm not talking about Coach Damn. He wants to win now. What's really going on in the heads of the Aggie fan is "HOLY SHIT WE CAN DO THIS?!?!? ARE YOU KIDDING ME? HAVE YOU SEEN JFF PLAY?!?!" Expect a lot of "red angrys" on TexAgs.

Les Miles and Kevin Sumlin will meet on the 50 yard line for a "Beat It" style knife fight.

LSU's starting qb Zach Mettenberger is not allowed in the city of Valdosta, after being found guilty of a sexual battery incident 2 yrs ago.

A coach whose players do stuff like this has no business complaining that hurry-up offenses are injury risks: http://i.imgur.com/ncQ2x.gif

A "GIF with sound" is not a GIF at all. #teamcuppycup isn't playing the same game

A&M and LSU fans deserve to be furious over ESPN screwing them with 11 AM kickoff. Inexplicable. Massive game.

Johnny Manziel is a cheat code.