Part I: Nifty Shades of K

Share All sharing options for: Binders Full of Women: the Kingsbury Office Chronicles

Bright Football Complex, a Tuesday morning about 10:00. Maggie, a senior Sports Management major and athletic trainer, is delivering the latest round of game footage USB drives and is about to reach his office. Her favorite part of the day. She tries frantically to think of what to say.

"Oh, hi," he responds nonchalantly. It’s like he hadn’t noticed who it was. She fiddles with her list and the bunch of USB drives.

"Good game on Saturday, Coach," she tries again. This time he turns from his monitor slowly. Oh God, she thinks. He’s wearing them! They make him look like a surfer or a 1950s movie star! She tries to control her breathing.

"Hello, Maggie." He had known it was her! She gasped involuntarily as she met his indeterminable gaze. She could not determine the type of gaze because his eyes were masked by the expensive sunglasses, but she imagined it was intense, or at least neutral. "You have the second half of the Tigers-Gamecocks for me?" A chill ran through her. Do I ever, she thought. Instead, she plucked a USB drive deftly from her other hand and held it out to him. Their fingers touched for a brief millisecond on the exchange and the chill flew down her spine into the depths of her being and her belly clenched like a fist when a fist is clenching really tightly, like where the knuckles turn white. "Thank you," he said, and smiled.

Suddenly the chills melted and she was overcome with a daring not familiar to her at all. Before she could stop herself, the question had tumbled from her lips. "Coach, why do you wear your sunglasses all the time?" she asked curiously. 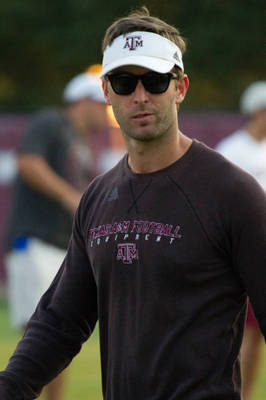 "I wear them so I can see things better. Things I need to see," he replied simply.

"And what sort of things do you need to see?" she asked teasingly.

"Well," he began thoughtfully. He’s so deep, she thought dreamily. "It helps me see if our receivers are cutting off their hitch routes a step early. It also helps with the contrast on the screen and out on the practice field so I can tell exactly how far away their DBs are lining up off of our guys. .." I wonder if I watered my fern this morning before I left, she wondered wistfully. "And it also lets me pinpoint the football in the air against the backdrop of the stadium or the sky more clearly so I can tell what type of spiral Johnny’s getting on the ball." Johnny, she thought longingly. "Plus it helps me change up our formations if I can see that the defense is cheating up on one side or the other, and it will help me see whether or not our guys should break off a flag route a yard or two earlier when they come out in a certain coverage," he finished professionally.

Wow, she thought. He’s never spoken so much at one time to me before. I don’t know what to think, she thought thoughtfully, full of thoughts racing through her mind. But I think I might have liked it better when he didn’t, she thought guiltily.

Then he smiled at her. "I guess I don’t really need them on inside, though do I?" he asked smilingly, with a smile on his rugged face as he took the sunglasses off. His eyes were like pools of something she didn’t know pools could be made of, and she smiled back happily.

"I guess not, Coach K," she said happily, dreamily, dazedly, breathlessly, and turned to leave.

"Maggie," he said off-handedly as she was nearing the door, "have you seen my Notebook?"

Yes, a hundred times at least, she thought. I already wore out one DVD. "No, Coach K, I haven’t," she replied coquettishly, bouncing her hair as she shrugged her shoulders.

"Well, keep an eye out for it if you don’t mind," he said pleadingly, imploring her to do so. She determined immediately that she would. "Oh and Maggie…," he added amicably as she was at the threshold, "call me Kliff," he finished finally.

"OK," she said dreamily. I already do, she thought to herself silently so that he could not hear her innermost thoughts. I already do.