Hey guys! We won and scored 59 points last week! Yippee! Oh....but we also gave up 57 weeks. Bending Crew! Bending Crew! What is going on with our defense in complete meltdown mode? Let's look and see under Mark Snyder's defensive hood.

Share All sharing options for: Questions About A&M's Defense Loom Large Against LSU

I'm tired of talking about Johnny Manziel here every week. The kid is good, okay? Give him the Heisman already. The offense is fun to talk about and will be especially after this week when the whole playbook will be available and we will see the true match up against an SEC defense. But there are more pressing matters we have to attend to folks. Our defense was horrible against Louisiana Tech. I mean gym bag socks stank bad. What's wrong? I don't have all the answers, but I have a few.

All of these plays I will show you today occurred on one drive with 8 minutes to go in the second quarter of the game, when Louisiana Tech scored their first of many touchdowns. (P.S., we were leading 27-0 by this point. 27-0.) I choose this drive to discuss because the defense was still fresh and fatigue and substitutions shouldn't be a factor here. 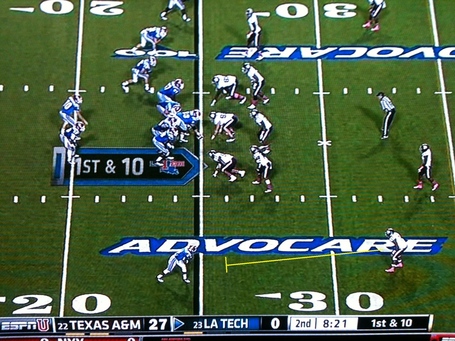 Let's first talk about our major issue -- tackling. It's quite embarrassing we even have to discuss this after Game 6 of the season, but we haven't improved week to week. In fact, I'd argue we are worse and going backwards.

This is the first play of the drive. Tremaine Jacobs is the corner covering All-World (Against Texas A&M) receiver Quinton Patton. I'm not a fan of the cushion given off the line of scrimmage (highlighted), but we are leading by 27 and the last thing we want is to give up a quick score. 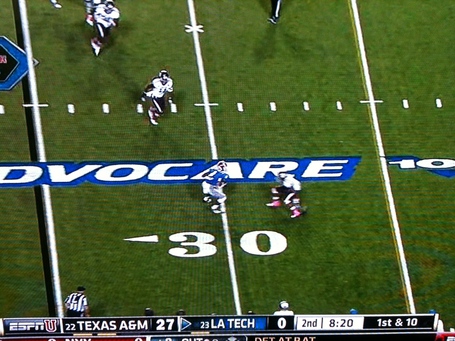 But if you are going to give up that kind of cushion, you better be able to break down the receiver when he catches it and tackle him for a short gain. What do you think happens here? 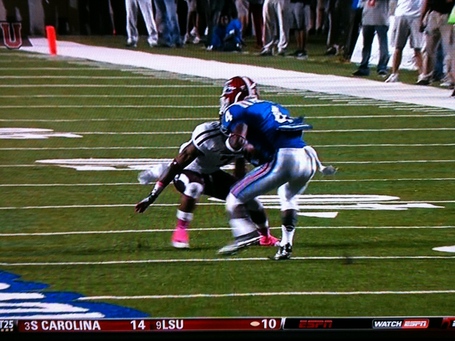 From this angle, Jacobs actually does a good job breaking Patton down and puts himself in position to make a tackle for short gain. Jacobs is low in his hips and his arms are cocked, ready to fire off into the hit and wrap up Patton. Everything is great. 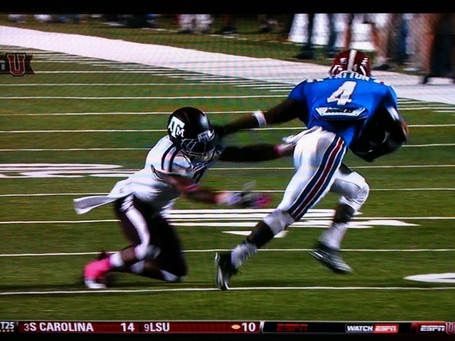 But for whatever reason, Jacobs stutters in his attack and doesn't run through the tackle. He stalls, Patton shakes, and Jacobs attempts an arm tackle. I HATE ARM TACKLES. Also, look at the position of his head. I was always taught to look at what you are tackling. That is not happening here.

That was the theme all night for our secondary. They were in position to make tackles for short gains. But for whatever reason, they didn't run through their tackles, or stalled waiting for the Louisiana Tech player to make their shifty move. That led to arm tackles and us just diving into the air hoping our hands were enough to bring them down or push them out of bounds. Nope. It's like we are scared to make contact. Scared. And that is a big difference from a secondary like, say, LSU who prides itself in physicality. It's all in the head, not in the technique.

Now let's talk about our run defense. What I'm about to show you may be disturbing. Viewer discretion is advised. 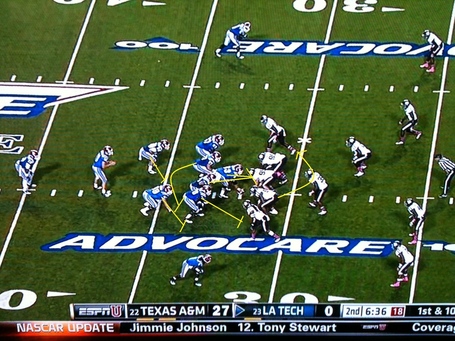 Here is that Louisiana Tech "Big Bone" formation you heard about all night. In all of these plays I'm about to show you, they will stay in this formation AND RUN THE SAME PLAY OVER AND OVER AND OVER. Their play design is to double team Spencer Nealy (either center-guard or guard-tackle combo) and work to the second level linebacker. Here the tackle to the play side will block out. The left guard and offset H-back will pull around to the play side, behind that blocker in the three point stance behind the ass of the tackle. It's a true power play.

We will line up mostly in the same defense in all of these plays. It's a 3-3-5 personnel (three down lineman of Damontre Moore, Spencer Nealy, and either Jonathan Mathis or Julien Obioha, three linebackers in Donnie Baggs, Jonathan Stewart, and Sean Porter, 3 corners of DeVante Harris, Floyd Raven, and Tremaine Jacobs, two safties of Toney Hurd Jr. and Steven Terrell). Here it almost looks like our old 3-4 defense with Raven playing at the line of scrimmage to the play side at the bottom of the screen.

The weird thing here I just can't explain is Damontre Moore. On every single one of these plays, Moore will try to twist behind Spencer Nealy to his right. Basically, he will take himself out of the play twisting to the opposite side of the play. That takes your best defender out of the equation and a huge hole where the play will be run off tackle. Doesn't make sense, but that is what is going to happen here. 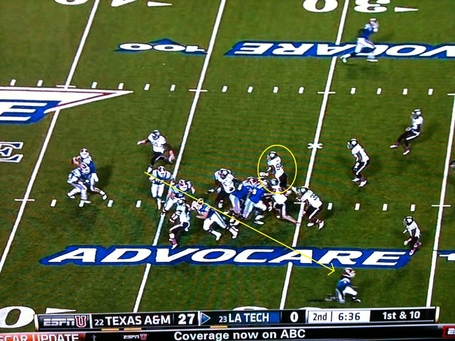 On the first play out of this set, Louisiana Tech actually elects to throw it due to the soft coverage on Patton (which they will complete). But everyone else is carrying out the run play which was called. See Damontre Moore (highlighted) all the way on the other side of the field after his twist? You can already see the lane that will develop on the subsequent plays. 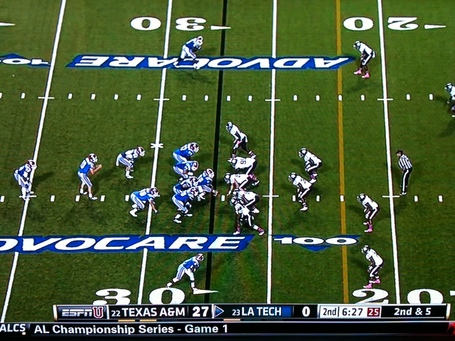 Here is 2nd down and 5. Same look from both teams. You can actually tell Damontre Moore is going to pull off the line of scrimmage (defensive end to the bottom of your screen). He looks soft in his stance, is off the ball a little, and not really putting weight on his down hand. Dead giveaway he is going to twist. 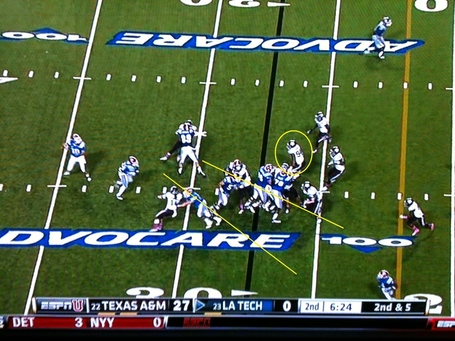 See Damontre after the snap? Away from the play.

Look at the nice lane developing. Raven is playing contain forcing the runner inside. That is his job on this play. He played it well. He needs someone to fill in the gap beside him. Nealy is double teamed and taken out of the play. Mathis is crashing down, doing a great job actually, but will crash too fast and take himself out of the play as he runs right past the hole. The linebackers are scrapping over. Donnie Baggs is going to be met by the pulling guard and is taken out of the play. Sean Porter was blitzing up the field and that H-back to the weak side picks him up. Jonathan Stewart is just going to be lost in the wash on this play, and will be for every play after. I'll be critical of him here -- he needs to run more down hill and not run around blockers. That is his problem. Toney Hurd will have to clean this up from this safety position. 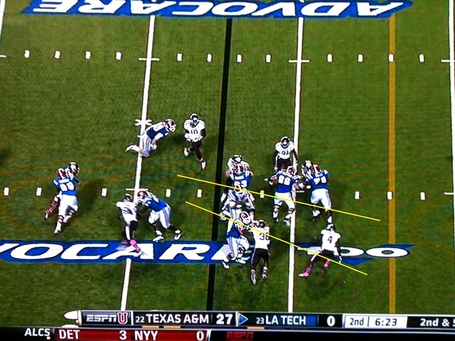 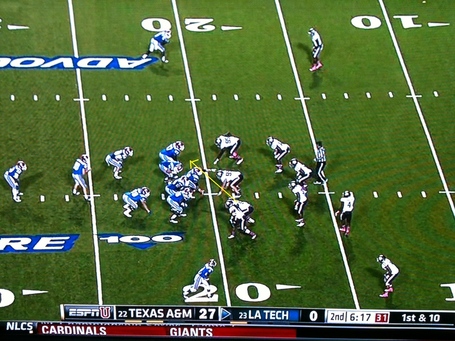 3rd play in a row out of the "Big Bone". What do you think Louisiana Tech is going to do? Yep, you guessed it. Same play for the third time in a row. I have to note a difference here in our defense. We are a little more spread out in the defensive line. Moore won't twist here like he did on the previous two plays. However, he will crash hard to the right which will once again take him out of the play. Spencer Nealy will try to crash down hard to the left to make up for it but will hit the double team that is heading his way between the tackle and guard combo. Everything else is exactly the same as before. 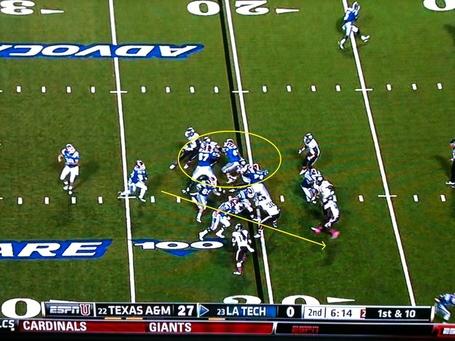 Damontre is once again to the right side of the field along with our other two defensive lineman and Sean Porter. Completely out of the play. However, this play for the defense has promise. Both Toney Hurd and Jonathan Stewart are scraping and should be in position to make a play. If not, Floyd Raven has a chance after the tackle that blocked him on the previous two plays had to deal with Spencer Nealy and the pulling guard doesn't appear interested in kicking him out. 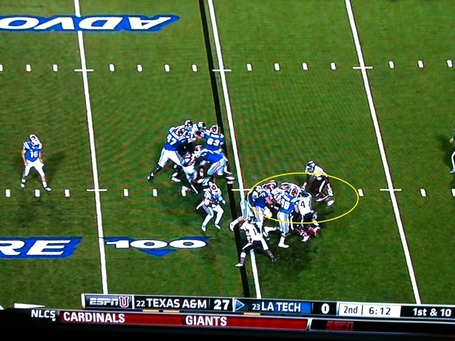 Well, the linebackers (Jonathan Stewart) once again gets caught in the wash of blockers and there is just a pile of bodies (highlighted) that won't be able to make a play. But the Raven is there! Alas, we are right back where we started this article. Arm tackles. Raven is in position, but doesn't run through the tackle, doesn't look at what he is tackling, and thinks his arms will be enough to bring him down. Luckily, the tackle attempt does trip the runner up after falling forward 5 yards for a 7 yard gain overall.

After watching our defense Saturday night, there are several things that stand out to me. Most of the time we are in position to make plays. We just can't finish. We don't tackle well and a gain that should have been stopped for two goes ten. Other times, we just can't adjust in real time to what is going on (see the defensive play design above) and have the same plays run against us over and over. That is the only thing that can be pinned on our coaches, although it in itself is a pretty large stumbling block. Our linebackers also don't run through blocks, instead electing to take them on instead of dis-engaging of just running around blockers taking them out of the play and their assignment.

Basically it boils down to two things: effort and a physical mentality. We don't play until the whistle and lack the mentality we are seeing from top teams Alabama, Florida, South Carolina, Georgia, and LSU. Until we develop that mentality, we will continue to see these issues manifest themselves every week.

Good thing LSU is coming into College Station this week so we can take notes.