See how the Louisiana Tech Bulldogs stack up against Texas A&M’s Fightin’ Texas Aggies in this week's Foundation of Facts...

Share All sharing options for: Foundation of Facts: Texas A&M vs LaTech

Wow, the formula didn’t get the spread right (who would have after a -4 turnover margin) versus Ole Miss, but the Ags found a way to pull it off, luckily. This week we will look at how the LaTech "Dawgs" stack up against the Aggies. Though LaTech has played all FBS teams, those teams are horrible, horrible FBS teams all around. Not a single one has a winning record; in fact, they are a combined 8-21 cumulatively. Can you say Cupcakes?

While the Tailgate each week is supposed to be a funny analysis of the game (and it is, believe me), there is nothing funny about what this game means to both programs. Each team is ranked in the Top-25 of both the AP and Coach’s polls. A win for LaTech means they can nearly coast to a possible BCS bowl. A win for the Aggies sets up an intriguing showdown with LSU (4-1)…

Odd Question of the Week: What would Bob Stoops look like with Mack Brown’s hairdo? 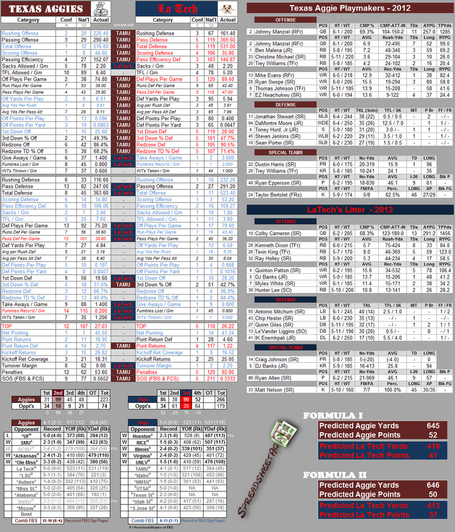 I apologize for this getting out a little late this week. On a personal note, I've been moving back from overseas through this season and just landed in a nice house and have been moving crap all week, so... I won't be doing any observations at this time, but I may add some in later tonight if I can circle back around to it.

I hope you enjoy this feature and will come back next week to see how the Aggies will fare, statistically, against the LSU Crawf Tigers in Game 7. (I can already smell the corndogs)

Answer to Odd Question of the Week

LOOK AHEAD: Louisiana State is coming off a loss to Florida and has to rebound against another SEC East team, South Carolina. Here’s the kicker: Whether they win or lose, they will be looking ahead to the Alabama Crimson Tide in Game 8 and the Aggies may be able to slip past the stout LSU defense at home. Could the Tigers lose 4 in a row? It would a humbling thing for Tigers Fans and would certainly put Les Miles on the hot seat by the end of the season.